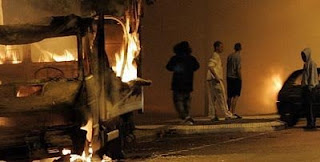 The broad implications of Sarkozy’s election.

When I was leaving Paris at the end of October 2005 after a visit to France, I had two things in mind: First, I had seen the beginning of the urban intifada, which would soon engulf about two hundred cities and towns. Second, I was able to have my book Future Jihad received by Minister of Interior Nicolas Sarkozy. And as my plane was taking off, I concluded that the jihadi “invasion” of France’s cities would lead to a French popular response. This Sunday’s presidential election epitomized this reaction, and Nicolas Sarkozy embodied it.

This striking electoral victory by the son of an immigrant is the result of the French public’s rejection of a slow decay that has been eroding the foundations of the Fifth Republic for years, some would say even since its inception in 1958. Without any doubt, the country’s economic insecurity and a need for change were among the reasons for Sarkozy’s electoral success. He promised a third path between the rigid left-wing agenda and Chirac’s stagnant economics. Many civil societies in Europe wish to escape the choice between Socialism and capitalism. European voters and French ones in particular, have desperately been trying to communicate this to their politicians since the end of the Cold War.

But Sarkozy’s victory is also a response to another desperate plea from the peoples of Europe, and from the French silent majority in particular: Please resist the rise of terror that is the urban jihad. This Sunday’s vote, and the presidential primaries, were also — even mostly — about this latent worry, even if the political and media elite attempted to ignore it. When given the opportunity, French electors responded to the elite’s tergiversation on the perceived threat to democracy and security.

THE RISE OF TERROR

Since the 1970s, France has been a target for terrorist activities. Left-wing, right-wing, and Middle Eastern-rooted groups attacked the country and were fought fiercely by the government. As of the early 1990s, French urban centers began to witness the rise of radical Islamist networks. Migrating from the Maghreb (northwest Africa) and other regions, Salafi clerics and militants promoted jihadism around Paris and many other cities. By the end of the decade, many suburban zones were practically ruled by powers parallel to the state.

Inaugurated by Charles de Gaulle in the 1960s, the “politique Arabe de la France” (Arab policy of France), meant in practice an accommodation by Paris to the wishes of foreign powers providing cheap natural resources to the country’s industrial complex. Very smartly, the domestic jihadi web positioned itself under the umbrella of the French Oil interest and multinational corporations; radical clerics were financed by Saudi and other Arab regimes, spreading Wahhabism and Salafism across the country. Any interference by French authorities would “hurt” the relations with Petrol-regimes and thus would have a negative effect on the “economic benefits” to the country. Moreover, high-profile politicians, including President Chirac, were accused of becoming personal friends with Middle Eastern financial empires.

The silent majority in France was powerless against the rise of the extremists in the banlieues (suburbs) and throughout the provinces. The average French voter grew frustrated with these two political options and was not willing to support Le Pen’s extreme positions. Popular dismay was exacerbated as the “parallel society” of radicals expanded in urban France. Within those enclaves, the Salafis were profiting from the void. Wherever French police and social workers couldn’t go, jihadi cells would mushroom. The combination of areas ruled by Imams and migrant terror-networks was explosive: In the fall of 2005, it did explode, right in the face of French citizenry.

THE FAILURE OF APPEASEMENT

After the September 11 attacks in the U.S., most Europeans worried that the same could happen to them. The European elite, however, largely dismissed the possibility, arguing that America brought the attacks upon itself by means of its foreign policy. Soon enough, Western Europe felt the ire of al Qaeda and its ilk: the Madrid train attacks on March 11, 2004, the London subway killings on July 7, 2005, and the assassination of Van Gogh on November 2, 2004, in Amsterdam were the most visible of the continental ghazwas (Jihadi raids).

In France, President Jacques Chirac, taking the Gaullist doctrine to its extreme, thought he could spare his country from the “holy wars.” By opposing the removal of Saddam and leading the criticism of Washington, the French political establishment, led by the Élysée (the presidential palace) and endorsed by Rue Solferino (the headquarters of the Socialist party), pitted itself against the United States. Between 2003 and late 2004, French diplomacy fought a fierce battle against America’s involvement in Iraq. The more Paris aligned itself with Berlin’s Schroeder and with anti-American governments worldwide, the more Chirac’s politicians felt safe at home and overseas. But the Jihadi powers, Salafists, and Khomeinists had different calculations. Their message to the French was: Either you are with us or you are against us.

During the Iraq war and in its aftermath, Salafi combat-cells continued to spread in France. Not supporting the U.S. in Iraq didn’t shield France from this domestic threat. Al Qaeda doesn’t reward infidels for not joining other infidels in the fight. Nor did Iran and Syria protect the French president’s interests and friends in the region, despite his political war with the Bush administration. In 2004, the Syrian regime went after Chirac’s allies and partners in Lebanon, most notably after Chirac’s friend Rafiq Hariri. In September, Paris reacted by introducing, along with the U.S., a resolution to get Syria out of Lebanon. In retaliation, the Assad regime launched an assassination campaign, killing many politicians, including Hariri. France’s “Arab policy” was collapsing. By the fall of 2005, France’s national soil was transformed into a battlefield.

On October 27, in Clichy-sous-Bois, an eastern suburb of Paris, “youth gangs” began torching cars and destroying property. The vandalism was purportedly instigated by the death of two young men who were being chased by police. But there was clearly more to it: The uprising spread to dozens of cities and similar graffiti appeared simultaneously across the country. By November 8, 2005, a state of emergency was declared. Ten thousand cars had been burned.

The French public took this as a warning. The media, government, and academia insisted on the unemployment-youth-socio-economic paradigm. But the silent majority didn’t buy it. People living close to the “insurgents” and interacting with them, including the security agencies, understood what was happening: Large urban zones around France’s cities had slipped away from national sovereignty. The radicals had built a “société parallèle,” concluded the average citizens. If the police couldn’t go into the suburbs, it was because they had become Taliban-like pockets. A national leader had to step in.

Moving swiftly and energetically, Nicolas Sarkozy, the minister of interior, took charge in what was the most sensitive aspect of the French collective psychology. After having organized the Islamic Federation of France in an attempt to whisk it away from the radicals the year before, Sarkozy became the target of attacks by the Salafi clerics, many of whom were preaching Jihadism in the mosques. Sarkozy used French laws to deport a number of them who were non-citizens. In 2003, Sarkozy had organized a state backed Council for Islamic Faith to contain the rise of the Islamists. The November 2005 intifada was a response to the Sarkozy counter-Jihadi measures. In response the minister of interior pushed for the deportation of the radical clerics he accused of incitements.

Nicolas Sarkozy embodies important sociological characteristics of French political culture. Being the son of immigrants, he can’t be attacked by the ideological users of the “immigrant shield.” He comes from a conservative background to assure the French that the national identity has to be protected, and he promotes progressive change, integrating the views of the French who are concerned with environmental and economic reforms.

Yet the collective consciousness of the French public today is primarily concerned with survival. This goes against the dominant paradigm, the official speech, and the intellectual rhetoric. French people took heed of the warning they saw on their televisions, the terrorist attacks in New York, Madrid, and London; they were shocked by what they saw from their own balconies happening on their streets. They were looking for someone to do something about this, and they found their man in Sarkozy.

This is not just one more European election; it is a benchmark in French politics and, subsequently, in the Western struggle to win the war on terror. The change will affect France deeply, but also its relations on the Continent, across the Atlantic, and in the Greater Middle East. Nicolas Sarkozy is determined to bring France back to itself after decades of Gaullist erring. His statement about being a friend of the United States doesn’t mean only that he will listen to what Washington has to say about the world, but also that he will make known to our politicians his experiences with a common enemy. As is clear, America’s establishment could well use the advice of this newly arrived friend on the world stage.

After he was elected, Sarkozy pledged that France would support the oppressed and persecuted around the world. In other words, France is committed to helping weak societies struggling for liberties against dictatorships. This statement is a prelude to what could become a new era of French solidarity with the global resistance to ideological jihadism. In this respect, Sarkozy’s victory can be viewed as a first step in the return of the French Resistance, this time against jihadism.

— Walid Phares is the director of Future Terrorism Project at the Foundation for the Defense of Democracies, a visiting scholar at the European Foundation for Democracy, and the author of The War of Ideas: Jihadism against Democracy.

Just Can't Get Enough? Walid Phares knows a little something about jihad. He's not a huge al Jazeera fan.