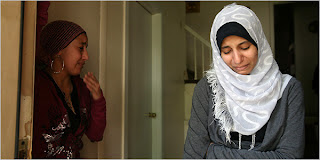 Israa, left, and Lamese Shnewer, whose brother is one of the men charged in a plot to kill Fort Dix soldiers.

Most of the mainstream media have grudgingly reported that three of the six Muslim extremists arrested Tuesday for plotting to attack Fort Dix are illegal aliens. Agents are now investigating whether they were smuggled across the border – and whether the others lied on their immigration papers to stay in the country. However, not one major outlet has mentioned the fact that the ACLU, People for the American Way, and other pillars of the Open Borders Lobby opened a major battlefront in the jiahdists’ backyard in Cherry Hill, New Jersey, to prevent city officials from evicting illegals like them.

The terror cell’s ruthless motivation and thorough planning are chilling. The group planned a massive assault on soldiers stationed at Ft. Dix, most recently known for housing thousands of their fellow Yugoslavian Muslims, most granted refuge by an overly generous United States. (Most of the Six were Albanian Muslims.) Among the targets they considered attacking were the Army-Navy football game, Dover Air Force Base, Ft. Monmouth, and U.S. Coast Guard ships docked in Philadelphia before settling on Ft. Dix. Federal authorities learned of the cell on January 31, 2006, when the group asked a local convenience store to dub a home video of their jihad training to DVD. (The footage included the men watching the last words of 9/11 hijackers and laughing when they heard of American soldier’s arm being blown off.) Undercover investigators infiltrated their paintball wargames in the Poconos. After a 15-month investigation, FBI agents busted the men “trying to buy three AK-47 automatic machine guns” – the preferred assault weapon of Palestinian children’s television – “and four semi-automatic M-16s.” Their videotaped strategy sessions discussed using mortars and rocket-propelled grenades on the base, or joining the army to attack from within, like their co-religionist, Sgt. Asan Akbar. FBI Agent J.P. Weis described the “homegrown” foreigners:

We had a group that was forming a platoon to take on an army. They identified their target. They did their reconnaissance. They had maps. And they were in the process of buying weapons.

Many of them face life sentences; one “is charged with aiding and abetting illegal weapons possession and faces 10 years in prison.”

“This is what law enforcement is supposed to do in the post-9/11 era,” U.S. Attorney Christopher Christie said Tuesday in Newark: “stay one step ahead of those who are attempting to cause harm to innocent American citizens.”

That is the goal of human intelligence – and it helps when your antagonists are stupid. But FBI agents should never have had to deal with at least three of these men: they were here illegally and should have been deported.

The City of Cherry Hill could not have taken the kind of aggressive action that would have halved the terrorist cell, because it had been bullied into submission by lawsuits filed by the Open Borders Lobby.

Like many other areas, Cherry Hill has experienced an exponential growth in the population of illegal aliens. The tiny, neighboring village of Riverside, New Jersey, (approximately eight miles away) is home to only 8,000 people but has seen an influx of 1,500-3,500 illegal aliens in recent years. Last July, the Republican mayor and council adopted the Illegal Immigrants Relief Act, forbidding townspeople from renting property to or hiring illegal aliens. The motion recognized illegal immigration as a force “jeopardizing the public safety of legal residents.” It imposed up to a $2,000 fine on violators, and businesses employing undocumented workers could lose their licenses for up to five years.

The Open Borders Lobby promptly declared war. The ACLU, People for the American Way, the Puerto Rican Legal Defense and Education Fund, the National Coalition of Latino Clergy and Christian Leaders, and a coalition of Riverside business leaders (who profit from cheap illegal labor) filed federal lawsuits seeking to block the ordinance – which has never been enforced. Soon, Riverside Mayor Charles Hilton overhauled the law to better withstand a legal challenge. He and two Republican council members lost their seats in November, but the new members have not rescinded the measure, and the current Democratic mayor supports it (at least, in theory).

And thus, the lawsuit goes on. The ACLU redoubled its efforts to overturn the measure last month. On May 14, Superior Court Judge John Sweeney will hold a hearing on the motion. (You can read more on the ACLU suit here and here.) Incredibly, one of the Riverside business owners filing suit, David Verduin, said because of this ordinance, “Everyone lives in fear.”

In fact, the cities live in fear. Local governments with similar ordinances have incurred legal bills estimated at more than $1 million for defending against ACLU nuisance suits. Sleepy Riverside has also become the target of raucous pro-illegal demonstrations (although a counter-protest to uphold the measure produced a larger turnout). Even the state capital, Trenton, has been deluged with calls to create “sanctuary municipalities.”

Ironically, the three Albanian brothers could have easily been naturalized under current immigration law. The New York Times notes the illegals formed “part of a family that has lived for years in Cherry Hill, N.J.” and were “joined by their brother-in-law, who was born in Jordan…and two other legal United States residents: an ethnic Albanian from the former Yugoslavia, and a Turk.” Thanks to our post-1965 immigration system engineered by Senator Ted Kennedy, immigration now centers on family reunification rather than merit: those with relatives in the United States go to the front of the line for citizenship.

Moreover, all those arrested were “doing jobs Americans won’t do” – like blowing up Ft. Dix. The terrorists included:

Mohamad Ibrahim Shnewer, 22, of Cherry Hill, a U.S. citizen born in Jordan and employed as a cabdriver in Philadelphia; Serdar Tatar, 23, of Philadelphia, born in Turkey and legally residing in the U.S. who worked at a 7-Eleven convenience store in Philadelphia and as a deliveryman at his father's pizzeria: and Agron Abdullahu, 24, of Buena Vista, N.J., an ethnic Albanian born in the former Yugoslavia who is legally residing in the U.S. and works at a Shop-Rite Supermarket. Also identified were three brothers, Eljvir Duka, 23, Dritan Duka, 28, and Shain Duka, 26, all of Cherry Hill, who are ethnic Albanians born in the former Yugoslavia who reside illegally in the U.S. and operate Colonial Roofing and National Roofing. (Emphasis added)

These poor souls came here from a war-torn country in search of a better life and greater opportunities (to kill Americans). If the Open Borders Lobby has their way, Congress – shepherded by President Bush and led by Ted Kennedy and John McCain – will reward such blue collar border-crashers with a Guest Worker Program, Social Security benefits, and a “path to citizenship.”

The Brothers Duka also enriched our multicultural Salad Bowl by refusing to assimilate. “Neighbors said the family had lived on the block for about seven years and had always seemed different from other suburbanites. There were 10 to 20 people living there...[T]he father and mother wore religious garb.” (They conformed in other ways. A former high school classmate reminisced, “We did teenage stuff. Drinking. Girls. Stuff like that.” One of the downtrodden also drove an Escalade.) “The family raised sheep, goats and roosters in the back yard.” This was a violation of local laws, and police regularly cited the family – but never reported the illegals.

How could they? Cherry Hill – and nearly every other city in the country – was paralyzed, deathly afraid that any move against either illegals or Muslims (let alone both) will result in lawsuits, a barrage of negative press about its alleged racism and Islamophobia, and million dollar legal fees.

Their fears were not without foundation. The jihadists’ hometown paper led the charge.

The Cherry Hill Courier Post wrote in an editorial on November 9, 2005, that today one can read only as the height of irony:

Powerful anti-immigrant sectors are now able to impose a simple sophism as truth: “The terrorists who attacked the country on Sept. 11, 2001, were immigrants; hence all immigrants may be terrorists.” There is no question that, by staying on this false path, the country is being led down a dead end where society believes immigration and terrorism laws are one and the same or, at least, directly linked. (Emphasis added.)

In its January 2, 2007, editorial (“Immigration Reform Overdue”), the papershowed that it had learned nothing,arguing that immigration reform“shouldn't include the tough proposals” but instead recognize “how much the country relies on foreign labor” and “needs to establish an immigrant workers’ program to legally bring in labor.”

But surely it learned the lessons of political correctness after its own townsmen nearly struck a military base, right? In its lead editorial the day after the arrests, the Courier Post opined, “We join Muslim religious leaders in urging South Jerseyans not to link the religion with terrorism. Instead, Americans must be vigilant to the behavior of people who make threatening comments or act suspiciously, regardless of who they appear to be.”

If Buddhists were equally given to waging jihad or firing automatic weapons while chanting Buddhist mantras, this would constitute valid counsel. Unfortunately, their lead story Wednesday was headlined: “Suspect: ‘I’m doing it in the name of Allah.’” Even the New York Times acknowledged the group “had no clear motivation other than their stated desire to kill United States soldiers in the name of Islam.” Considering 9/11, illegal immigrants who adhere to the Religion of Peace seem to figure prominently in terrorist attacks on American soil. Perhaps the authorities would not be remiss to apply greater scrutiny to those who fall into these categories.

The Federation for American Immigration Reform has just completed a study (PDF) that found illegal immigrants cost New Jersey taxpayers $2.1 billion annually. Were it not for a Garden State convenience store worker and the jihadists’ stupidity, the surcharge could have been in blood – and that blood would be on the hands of the ACLU, People for the American Way, Islamic terror apologists like CAIR, and a leftist media that looks the other way.