Clemens Is Returning to the Yankees By TYLER KEPNER
The New York Times
Published: May 7, 2007

It was a news bulletin delivered before 52,553 fans on a glorious spring day at Yankee Stadium, where the season is suddenly alive with hope again. The man with more victories than any living pitcher was holding a Yankees microphone, addressing the crowd with a splash of the high drama that has punctuated his career.

Clemens during his last regular season start with the Yankees in 2003.
“Thank y’all,” said Roger Clemens, who was wearing a business suit, a crew cut and a Yankees World Series ring as he stood in a box above home plate. “Well, they came and got me out of Texas, and I can tell you it’s a privilege to be back. I’ll be talking to y’all soon!”

Then Clemens pumped his fist as Yankees General Manager Brian Cashman crouched behind him, beaming. For a $28 million salary — prorated based on the date he is added to the major league roster — Clemens has returned to the Yankees, who trail the Boston Red Sox by five and a half games in the American League East but got a pitcher both teams wanted.

“Make no mistake about it,” Clemens, who hopes to be ready by late May, said later at a news conference. “I’ve come back to do what they only know how to do here with the Yankees, and that’s win a championship. Anything else is a failure.”

A sense of desperation has hung over the Yankees for weeks, cresting with a 9-14 April that was followed last Tuesday by a hamstring injury to the prized rookie Phil Hughes during a game in Arlington, Tex.

The Yankees acquired Clemens in a trade from Toronto in 1999, then watched helplessly as he retired after the 2003 World Series, his fourth in five years with the team. 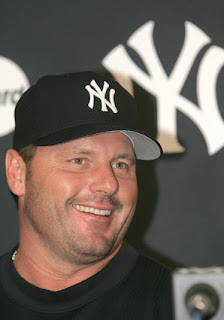 Clemens announced his return at a press conference on Sunday afternoon.

Clemens changed his mind and kept playing, joining his hometown Houston Astros for three more seasons. Cashman tried to sign Clemens in March and consummated this deal on Friday night, when he talked with the Yankees’ team president, Randy Levine, and chief operating officer, Lonn Trost, about how Clemens might make a grand entrance.

“We thought, ‘Wouldn’t it be great if he showed up and announced it himself on the scoreboard?’ ” Cashman said, reflecting on the day in a telephone interview last night. “It just seemed like it would be a real nice touch, and only someone of his type of stature could really pull it off.

“It was one of those neat moments in Yankee history. People who had tickets today will always remember that and always have something to talk about. I got goose bumps. He’s just such a presence.”

The fans erupted after the announcement, with the loudest and longest applause of an afternoon in which the Yankees would cruise to a victory over the Seattle Mariners, 5-0. Many fans immediately took out their cellphones to share the news.

The Yankees were in the dugout at the time of the announcement, getting ready for the bottom of the seventh inning. Manager Joe Torre said the players were not aware of the news beforehand, though some said they knew, including Derek Jeter and Jason Giambi, who had regularly sent messages to Clemens since spring training, urging him to return.

“The Yankees were in both of my ears the whole time,” Clemens said, “and that was well before they had the problems they’ve had on the mound.”

Those problems have manifested themselves in a carousel of pitchers who have started games. Tonight, the Yankees will start Matt DeSalvo, their sixth rookie starter this season. DeSalvo will be their 10th starter over all, the most any team has used in the first 30 games of a season.

Three starters have missed time with hamstring injuries, leading Cashman to fire the team’s strength coach, Marty Miller, last Wednesday. The veteran starter Carl Pavano has ligament damage in his right elbow and has told teammates and club officials that he wants to have reconstructive surgery.

When Hughes was injured, Cashman was on that trip to Texas, a rare road visit for him, and one with an ulterior motive.

Cashman wanted to fly to Houston to meet in person with Clemens and his agent, Randy Hendricks. But Hendricks had business elsewhere.

“If you saw me walking around in Texas looking the way I was looking, now you’ve got a little secret to why,” Cashman said. “Here, as I was trying to get Randy Hendricks on the phone, he was text-messaging me: ‘I can’t talking to you now, I’m in Fenway Park.’ ”

But Hendricks said he did not leave Fenway thinking that the occupants, the Red Sox, had the same timetable as Clemens. Hendricks said the Red Sox and the Astros wanted Clemens, who turns 45 in August, to return in mid-June or later. Clemens is nearly ready now.

“I put it to Roger: ‘Look, you’re either going to get ready to play now with the Yankees, or you’re going to have to delay it for another month. Which is it?’ ” Hendricks said. “He’s Roger Clemens. From my point of view, when he says he’s ready to play, teams should listen.”

The Red Sox had obvious appeal to Clemens for the historical symmetry they would bring to his career. Clemens played his first 13 seasons in Boston, and he is tied with Cy Young for the franchise record in victories.

But Clemens retains strong ties to the Yankees, with seven former teammates in the clubhouse as well as Torre, whom Clemens called a special man.

And then there is George Steinbrenner, 76, the Yankees’ principal owner, whose box Clemens visited in spring training when he dropped by Legends Field to watch his close friend Andy Pettitte pitch. Clemens has not said what Steinbrenner told him then, but it made an impact.

“He had some words for me, which I’ll keep with me forever,” Clemens said. “I might share those when this season is all said and done. I’ll keep those close to my heart for now.”

Clemens is second on the career list in strikeouts, with 4,604, and eighth in victories, with 348. He went 7-6 with a 2.30 earned run average in 19 starts for Houston last season, but the year ended awkwardly.

On the last weekend of the regular season, a report surfaced in The Los Angeles Times in which the former Yankee Jason Grimsley, in an affidavit, identified Clemens and Pettitte as players who had used performance-enhancing drugs. Soon after, the United States attorney Kevin V. Ryan said the report contained “significant inaccuracies” but did not elaborate.

Pettitte left the Astros to sign with the Yankees, and Clemens was also a free agent who had not committed to continuing his career. If he did, though, Clemens planned to start his season later, as he did in 2006, to keep his body fresh for the stretch drive.

Cashman had a standing offer to Clemens of $25.5 million, from a meeting with Hendricks in March. The Yankees’ recent urgency gave Clemens leverage in negotiations and essentially cost the Yankees an extra $2.5 million.

Privately, the Yankees had been determined since last winter not to be outbid for Clemens, who made a prorated portion of a $22 million salary with the Astros last season.

The Yankees expected the Red Sox to make a substantial offer, and while they believe the Red Sox did that, an official directly involved in the talks said that Boston offered Clemens $10 million less than the Yankees, and the chance to be part of a five- or six-man rotation, depending on his preference. The official spoke on the condition of anonymity because he did not want to violate tampering rules.

Cashman said Clemens would work out for the next week and a half in Lexington, Ky., where Clemens’s son Koby plays for an Astros farm team. Cashman said the Yankees would want Clemens to pitch for their minor league affiliates while he gets his arm in game shape.

Clemens’s contract allows him some flexibility in his schedule, giving him the freedom to return to Houston on days he is not scheduled to pitch. The Yankees refused to do that last season, a stance that Cashman said disqualified the Yankees from signing him.

Players have since told Torre they would not object to special treatment for Clemens, who will have the same locker and uniform number, 22, he had before.

“I could care less,” Giambi said. “I’d carry his bags for him, just as long as he is on the mound.”

Clemens said he might not need as much time at home anymore. His two oldest children have graduated high school, and his two younger sons seem to want him to be a Yankee again.

“They love Derek Jeter and A-Rod, so they’re as excited as ever that I’m back here in New York,” Clemens said. “I’m sure they’ll be pestering some of my teammates quite a bit.”