Richard Justice: Roger Clemens never found us all that interesting. 
I kissed the guy's feet every time he walked into a room. I wrote time and again that it was an honor to have him pitching for the hometown team.

In other words, I did my part. I even put up with his obnoxious agent, Randy Hendricks. If this deal includes a one-way ticket out of town for that guy, it may end up being worth it.

I believed all that stuff, too. Roger Clemens is an amazing competitor. He no longer has great stuff, but he stills wins because he has guts and poise and smarts and astonishing control. If you wonder what he has left in the tank at 44, don't. He wouldn't put a uniform on if there was any doubt about his ability to succeed.

The truth is, Roger Clemens was bored by the Astros. He wanted a bigger stage, brighter lights, more buzz. We just never did it for him. Forget everything he says or how that Hendricks guy will try to spin it. (At least, Clemens won't come up with some cockamamie story about God telling him to sign with the Yankees.) It comes down to the fact that there's no other team in baseball that can offer him what the Yankees can offer.

It's not about money. Okay, it's not about his personal salary. He could name his price with the Red Sox, Yankees, Rangers or Astros. It's about playing for a team that will spend whatever it takes to win. It's about a franchise that measures everything in terms of championships. Some teams talk the talk. Only a few walk the walk. The Yankees walk the walk more resolutely than any other franchise.

It's about standing on the mound on a Thursday night at Yankee Stadium in front of 50,000 fans. It's about knowing that every pitch, every game, matters. The Big Apple is a baseball town.

Consider what New York did for the Rocket's reputation. When he arrived there in 1999, he was seen by some as selfish. He'd put up great numbers in his career, but had never won a championship. He behaved badly at times, did a pretty good imitation of a jerk.

He became something else during his time with the Yankees. He finally joined a franchise that was bigger than the Rocket. He respected the pinstripes, loved playing for Joe Torre, absolutely loved having teammates like Derek Jeter and Bernie Williams. 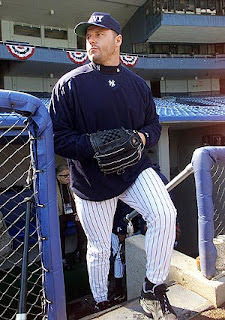 He won four pennants in five seasons. He won two championships. He loved winning. He loved New York. He loved the energy and the history. He hit all the right buttons. Remember how he'd touch Babe Ruth's plaque when he finished his bullpen warmups?

When he and Andy Pettitte signed with the Astros three years ago, I remember telling a team executive that they were going to love it in Houston.

I'll never forget how the guy looked at me and smiled.

He had seen the future. They both found it boring. Oh, they worked hard to come up with other excuses. Hendricks told me a few months ago that pitching for a team that didn't score many runs had drained Clemens. He surely was right about that, but that's not why Clemens signed with the Yankees on Sunday.

If you've played for the Yankees or Red Sox, you're going to find it hard to adjust to life in Drayton McLane's empire, where the bottom line is king and the Astros spend only enough to be competitive. McLane talks of being a champion, but his actions indicate his heart is someplace else.

(In defense of McLane, total payroll isn't the determining factor it once was. The Astros have outspent the World Series winner several times in recent years. On the other hand, the Yankees will never lose because they were unwilling to spend money. It'll never be about money with the Yankees.)

When last season ended, Clemens was done with the Astros. He didn't say it, but Hendricks came pretty close to telling the Astros. Back in December, someone with the Astros whispered that they didn't expect to keep either Clemens or Pettitte. He'd had enough conversations with Hendricks to get a feel for how the land was shifting.

If you're angry at the big guy, that's your right. You don't like being told that someone considers your favorite team to be second class. That's essentially what Clemens is doing.

Don't forget what he contributed in three seasons with the Astros. He won one Cy Young Award and would have had a second if the Astros had scored a few more runs. He had the lowest ERA in the game the last two seasons. And oh by the way, the Astros had their two best seasons ever after Clemens and Pettitte arrived.

He made 51 starts the last two seasons. The Astros scored three runs or less 19 times. In other words, he had to be just about perfect 37 percent of the time or he had no chance to win. He failed to win 17 quality starts in 2005-2006 because the Astros didn't score enough runs. His ERA in those two seasons was a dazzling 2.02. He did his job.

News of his signing with the Yankees comes at a time when the Astros are slogging through another season without offense. They're 13th in the NL in runs and have been held to three or less 14 times. Even if Clemens had wanted to stay, he might not have been up for more 2-1 losses. The Yankees, meanwhile, are leading the majors in runs.

It was fascinating to have him around if even for awhile. He understood winning and being a good teammate. His teammates liked him. The Astros recently told him they wouldn't grant him another year of special travel arrangements.

One reason was that they were tired of having one set of rules for 24 players and another set for one guy. The other was that they wanted him around. They believed he set a good example. They loved the influence he had on younger players.

I'd recommend no hard feelings. I'd thank him for staying around as long as he did.
Posted by jtf at 6:45 AM