Buster Olney: How Clemens landed in the Bronx 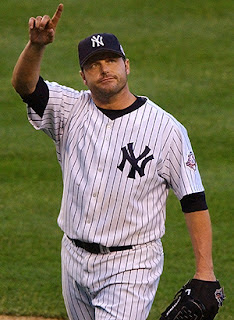 
The Yankees' charter touched down in Texas last Monday evening, and general manager Brian Cashman sent a text message to Randy Hendricks, the agent for Roger Clemens. "I just landed in your wonderful state."

Hendricks responded: "I'm out of town." And a couple of hours later, as Cashman dined with manager Joe Torre, he said, "I wonder if he's at Fenway Park."

This was just one more anxious moment, in the Yankees' months-long pursuit of Clemens. They had lost out on the bidding for the future Hall of Famer last year, but Clemens had remained close friends with a lot of the Yankees -- Derek Jeter, Torre and Cashman. And his very good friend Andy Pettitte re-signed with the team in January.

And when the Yankees traded Randy Johnson to the Diamondbacks, they felt as if they were setting themselves up in two ways to lure Clemens: First, by clearing Johnson's $16 million salary from their books, they would have the cash to bid aggressively on Clemens, and secondly, they would no longer have second thoughts about giving Clemens special treatment, like leaving the team on days between his starts. They would not have wanted to create that precedent if Johnson was still on the team.

But the Big Unit was now gone and from the beginning of spring training, the Yankees -- like the Astros and the Red Sox -- were in contact with Hendricks, monitoring Clemens' thinking, making it clear they were interested. The Yankees upped the ante quickly, though, in March, floating the notion that they were prepared to pay Clemens significantly beyond what his prorated salary was last season with Houston, about $3.6 million per month, a prorated $22 million salary.

The Yankees' first trial balloon in March: $25.5 million. Clemens also met with owner George Steinbrenner, who made a personal plea to the pitcher, reiterating how much he wanted Clemens to come back.

Clemens and Hendricks made it clear to everyone, even into late April, that he wouldn't make his decision until late May. But as Mike Mussina got hurt and then Carl Pavano, the Yankees felt they could and should become more aggressive. After landing in Texas, Cashman wanted to set up a meeting with Hendricks -- only to learn, to his horror, that the agent was meeting with the Red Sox, which the agent confirmed to Cashman with a text message on May 1. Hours later, Phil Hughes hurt his hamstring. The Yankees' need for pitching was acute.

Cashman and Hendricks e-mailed back and forth on Tuesday and Wednesday, kicking around the idea of meeting during the day Thursday in Houston, but there was a terrible storm in Arlington that forced the postponement of the game. The Yankees and Rangers were scheduled for a doubleheader Thursday, and Cashman felt that if he was away from the team during the game, then the media might get an inkling of how he was trying to make an aggressive move on Clemens. He had used the same approach in signing Johnny Damon: Make a very aggressive offer quickly and force a decision.

So Hendricks and Cashman spoke on Thursday night, and the financial parameters were laid out: Clemens would cost a prorated salary of $28 million. Hendricks got off the phone and called Clemens, and told him that the time was nearing for the pitcher to make a decision, and that if he was going to go to the Yankees, now was the time. "Let's do it," Clemens responded.

Cashman spoke with Steinbrenner and team president Randy Levine on Thursday night, laying out what the cost would be -- including salary and luxury tax, about $6.5 million per month to the Yankees. They agreed to talk the next day, and at 4 p.m., the Yankees' executives had another conference call.

Cashman hung up and phoned Hendricks immediately. "We'll do it," Cashman said, and the two men talked about how to break the news, agreeing that having Clemens speak to the crowd at Yankee Stadium on Sunday afternoon could make for a great moment.

Torre was in the loop all along, and about a half hour before Sunday's game, he met with the coaching staff to inform them of the news. Word drifted out to the players. Early Sunday afternoon, Hendricks phoned executives from both the Red Sox and Astros and told him that he had a deal with another team. "It was a bit of a surprise," Tim Purpura, Houston's GM, said on Sunday evening, from the Astros' team bus. "We hadn't had any dialogue since the end of spring training."

During the game, Astros manager Phil Garner turned to Brad Ausmus and told him the news about Clemens. "I'm not shocked," Ausmus said, by phone. "I feel exactly the way that I did when Pettitte signed. I'm not shocked, but I'm disappointed that I won't have the opportunity to work with him anymore."

Clemens' arrival at Yankee Stadium was timed carefully, in the midst of the Yankees' victory over Seattle on Sunday, and when he walked through the door, Cashman greeted him with a handshake. "Thanks for coming over," he said, "we really need your help."

Clemens spoke to Steinbrenner briefly, and then stepped out into the owner's private box and picked up a microphone to speak to the crowd at Yankee Stadium.

Buster Olney is a senior writer for ESPN The Magazine. Click here to subscribe to the magazine.
Posted by jtf at 10:25 PM

Nice post, its a really cool blog that you have here, keep up the good work, will be back.