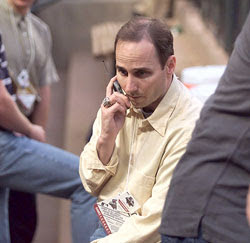 Bergen County Record
9 May 2007
Brian Cashman has been surrounded by Yankee haters long enough to know there's a propaganda orgy going on, now that Roger Clemens is in pinstripes at the staggering cost of $4.5 million a month. Same old Bombers: When in doubt, head for the ATM. At least that's what you hear from people who think Cashman would be helpless without George Steinbrenner's limitless wealth.
The indictment surely stings the executive, but don't expect him to articulate the counterargument heard so often within the Yankee front office. Which is, didn't the Mets get Carlos Beltran, Billy Wagner and Pedro Martinez by writing the biggest check? Didn't the Red Sox do just that to snare Daisuke Matsuzaka? And didn't the Giants court Barry Zito by offering him enough money to feed a Third World country?
Cashman would like to say all of this, but realizes it's a pointless debate.
"I can't worry about trying to convert anyone, I'm just trying to win games," he said Tuesday. "We're sitting where we're sitting [six games out of first place] and I'm responsible for that. I take full responsibility for what's happened to date."
Indeed, Cashman has replaced, or at least joined, Joe Torre at the epicenter of the Yankee crisis, since he's being blamed for the series of disasters that led to the Yankees overpaying Clemens. It was Cashman, not Torre, who signed Kei Igawa instead of Ted Lilly. The loyalty to Carl Pavano is on Cashman's docket, too, as was the underbidding for Matsuzaka.
It was a perfect storm in April, during which the Yankees lost 5-of-6 to the Red Sox and shipped seven players to the disabled list. Hence, the panic to sign Clemens. Not so fast, says Cashman, who insists there was no real emergency in signing the Rocket. The GM reminds his detractors, in vain perhaps, that Clemens was always on the Yankees' radar, just as he also was being pursued by the Sox and Astros.
The only difference was, the Yankees wanted Clemens today, not a month from now as the Red Sox preferred. And unlike the Red Sox, the Yankees were willing to sweeten their spring training offer from a pro-rated $25 million to $28 million. For an extra $3 million, Cashman defies anyone to call that panic.
"Roger was part of our business plan all the way back in the winter, most people understand that. It's not like we woke up and signed Roger out of the blue," Cashman said. "Is it an expensive plan? Yes it is. But it's still keeping in line of our goal to make this team younger in the future."
It sounds counterintuitive, signing a 44-year-old pitcher for a record sum in order to get younger. Cashman doesn't bother explaining the logic to Yankee haters. But to anyone who will listen with an open mind, here goes. The commitment to Clemens is for one year only, which means Phil Hughes' spot in the rotation is safe in 2008 (and Matt DeSalvo's, too). Clemens didn't cost the Yankees a draft pick. Neither did Andy Pettitte, for that matter.
Given how poorly the Yankees played last month and how fast the Red Sox were pulling away from the East, did Cashman have any option except to hand Clemens a blank check? The GM certainly wasn't going to let the Red Sox get involved, since Clemens' return to Fenway would've ended the Bombers' season outright. But there's still the matter of Igawa, who appears to be a $20 million mistake, and Pavano, who represents another $40 million down the drain. And the Yankee bench, designed by Cashman, is the worst it's been in years.
Cashman admits Igawa has been, at times, awful. But he says, "It's a long season, we're going to get him fixed. People who know pitching, people we trust, say he has major league stuff and it's just a matter of fixing his mechanics. All I ask is that people not judge him on six starts, three of which were bad."
And Matsuzaka? Cashman bristles at the suggestion that his $33 million posting bid was too conservative.
"That was an aggressive bid. We thought it was a winning bid. No one can call that conservative," Cashman said. "If it had been the winning bid, it would've been a record-setting bid. Ask Omar Minaya [whose Mets bid $36 million] if he thought his bid was conservative. I'm sure the Mets thought they had the winning bid, too."
And Pavano? On this matter, Cashman exhales long and slow. There's certainly no defending the pitcher's Yankee resume, which is littered with injuries and non-performance. The GM knows he's the only member of the organization still trying to rationalize signing Pavano, when just about everyone else has written him off as the worst mistake in a decade. For now, all Cashman will say is, "We're going to hold off any announcement until he's examined [by Dr. Frank Jobe] in California."
Cashman wouldn't comment on clubhouse speculation that an examination last week by Dr. James Andrews found no tear in Pavano's elbow ligaments. Nor is the GM touching an equally disturbing belief, held by some Yankees, that Pavano wants surgery regardless of the doctors' diagnoses. Cashman, for now, is moving forward, thinking ahead – although he admits feeling George Steinbrenner's hot breath on his neck lately.
"Do I feel pressure from Mr. Steinbrenner?" Cashman asked rhetorically. "Every day, every year. He wants a winner. I'm doing my best to provide that."
E-mail: klapisch@northjersey.com
Posted by jtf at 10:02 AM