Selena Roberts: Clemens Returns in a Save Situation 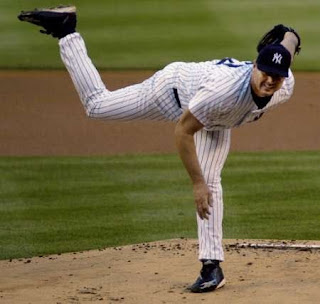 In a dapper striped tie and blazer, with all eyes on his Aqua Velva-fresh face, Roger Clemens wore the look of a groom’s best man when he took the mic at Yankee Stadium yesterday to deliver what ended up as a toast to himself.

He has allowed the Yankees to love him once again. Hear, hear.

Clemens is now the lucky fella who has everything. Clemens gets to reunite with his pal Andy Pettitte to resurrect their Yogi and Boo Boo relationship. He will also receive the spa treatment as the special one on the roster who is permitted to lounge by his family pool while the Yankees are on trips.

“I could care less,” Jason Giambi said of the Roger Rules. “I’d carry his bags for him, just as long as he is on the mound.”

So it’s settled: Clemens will be gifted with Giambi as a valet.

Clemens also gets to be a Texas-sized hero, with a chance to restore credibility to a rotation mired in a hamstring ward, lift his beloved Joe Torre from job insecurity and save the Boss from issuing another threat on paper through Howard Rubenstein.

We want you and we need you, Brian Cashman essentially told Clemens’s agent.

So it’s a deal: Clemens will be billed as Dudley Do-Right for his rescue of the Yankees before the Red Sox locomotive barrels down the tracks.

Clemens gets it all — and at $4.5 million a month for the seasonal work of a park ranger. This is hedge-fund star dough, the kind of payoff reserved for the risk takers of the world. 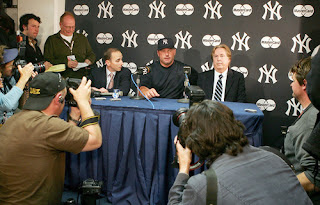 Media gathers around Roger Clemens at Sunday's press conference where the future Hall-of-Famer announced his return to the Yankees.


And yet, Clemens incurs no risk at all. It’s all on the Yankees.

The threat to the Yankees has nothing to do with Clemens’s age, but how he hasn’t aged at all on the approach to 45 when he once seemed kaput at age 35. Maybe Clemens has developed a natural youth potion, an organic Botox for his old bones. Certainly, Clemens deserves credit for his greatness — with a talent that is an understandable siren’s song for the Yankees — but he has also witnessed his aura undermined by a steroid whisper campaign.

In the past two years, Clemens’s name has been linked to doping speculation amid a book tour by Jose Canseco and documents reported by The Los Angeles Times.

In his Harlequin about steroids, Canseco wrote about Clemens’s irritation with juiced hitters in the mid-90’s, sluggers who were gaining on the Rocket’s fastball.

“One of the benefits of steroids is that they’re especially helpful in countering the effects of aging,” Canseco wrote in his book “Juiced.” “So in Roger’s case, around the time he was leaving the Boston Red Sox — and Dan Duquette, the general manager there, was saying he was ‘past his prime’ — Roger decided to make some changes. He started working out harder. And whatever else he may have been doing to get stronger, he saw results.”

The innuendo did not cause Rocket to flip his booster. Instead, Clemens did what others branded a fraud by the fraudulent might do: he dismissively launched into a comedy routine, poking fun at Canseco for spending his house arrest writing a book in ankle bracelets. 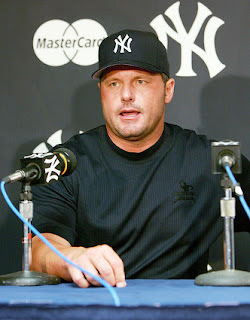 One tell-all down, another one to go. Last October, right after Clemens completed his short season with the Astros in 2006, finishing with a 2.30 earned run average and 102 strikeouts in 113 innings, an article surfaced in The Los Angeles Times.

A few months earlier, Jason Grimsley had been busted by authorities for ordering shipments of human growth hormone. Under an interrogation light bulb, Grimsley fingered several players for using performance-enhancing drugs, but the names were redacted in court records. The Times, saying it had seen the documents, revealed some of those names, which included Clemens and Pettitte.

The Times’s disclosure enraged the United States Attorney’s office, which labeled the report inaccurate but did not detail what mistakes had been made. What exactly was wrong in the report — the names, or something else?

Pettitte expressed surprise when his name was attached to Grimsley. And Clemens replied by saying he had passed every drug test given — all of them since sampling began in 2003 for a system that still does not include a blood test for human growth hormone.

The testing loopholes make it impossible to decide the purity of a player’s bloodstream. Such is the sticky residue of baseball’s toothless stance on steroids. Each year there is more police action, new steroid developments. The raid du jour now centers on a former Mets clubhouse attendant, Kirk Radomski, whose Long Island house was searched by investigators, who discovered a steroid supply closet for a client list of major leaguers.

The feds — along with baseball’s steroid sleuth, George J. Mitchell — are investigating Radomski’s info. Mitchell is currently calling players to dish on the league’s culprits.

This is not to say Clemens is among the suspects, but are the Yankees concerned? Maybe the Boss has some inside information from his baseball spies. Maybe that is why he has just given Clemens everything a man could want. Either that, or the Yankees are desperate enough to take the risk.