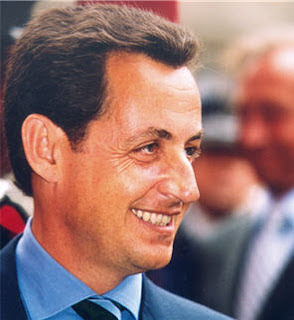 
Is the French election a belated acknowledgment of reality or the latest attempt to dodge it? In other words, is it Britain voting for Margaret Thatcher in 1979 and America for Ronald Reagan the following year? That's to say, the electorate understands the status quo is exhausted and unsustainable and that unless catastrophe is to be avoided radical course correction is required.

Or is it Germany voting tepidly and tentatively to give Angela Merkel the narrowest of victories in 2005? In other words, the electorate was irritated with the incumbents but recoiled from any meaningful change, with the result that Frau Merkel found herself presiding over a nominally fresh government with no agenda and no mandate for reform.

I would bet on the latter. Just as Frau Merkel proved not to be Germany's Margaret Thatcher, I would be surprised if Nicolas Sarkozy turned out to be France's Ronald Reagan -- not because he doesn't have Reaganite tendencies but because the French electorate, like the Germans, aren't there yet.

Mr. Sarkozy did well in the first round because he co-opted many of Jean-Marie Le Pen's concerns. I don't mean the fascism and the anti-Semitism and the oven jokes. It's a tribute to the shriveling of the French political sphere that, in the last presidential election in 2002, an antiquated perennial loser could catapult himself into second place. But, in an advanced technocratic state, where almost any issue worth talking about has been ruled beyond the scope of partisan politics, you might as well throw away terms like "left" and "right."

The previous presidential election was meant to be a contest between the supposedly conservative Jacques Chirac and his supposedly socialist prime minister, Lionel Jospin. In practice, this boiled down to a candidate who is left of right of left of center, and a candidate who is right of left of right of left of center. Mr. Chirac and Mr. Jospin ran on identical platforms: They favored high taxes, high unemployment and high crime. Faced with a choice between Tweedleleft and Tweedleright, you couldn't blame French voters for choosing to make it a real race by voting for the one guy running on an openly stated, clearly defined manifesto. In 2002, the political class considered most of Mr. Le Pen's preoccupations -- immigration, crime, unemployment -- beneath discussion.

This time Mr. Sarkozy didn't make that mistake. The discontented citizenry often complain about the lack of croissance -- that's not a basket of crescent-shaped buttery breakfast pastries invented to mark Christendom's victory over Islam at the gates of Vienna in 1693, but the French word for "growth."

The Fifth Republic has entirely missed out on the Reagan-Thatcher booms of the last quarter-century: its overprotected and over-regulated economy has led to permanently high unemployment and a lack of entrepreneurial energy, not to mention various social tensions from the blazing Citroens and Renaults lighting up the sky every night to entire suburbs that have effectively seceded from France to join the new Caliphate.

It's a measure of the torpor of French politics that Mr. Chirac regarded a presidential election against an elderly fascist as little more than a mildly embarrassing social faux pas rather than a profound indictment of a failing system. So he spent his second term like the first, governing as an elegant narcissistic complacent hack.

When you mention "the French riots," most people assume you're talking about the excitable chaps rampaging around in 2005. But another set of riots six months later symbolizes the trap in which the political class is caught.

The fall 2005 rioters were "youths" (i.e., Muslims from the suburbs), supposedly alienated by lack of economic opportunity. The spring 2006 rioters were "youths" (i.e., pampered deadbeats from the Sorbonne), protesting a new law that would enable employers after two years to terminate contracts of employees who are under age 26 and in their first jobs.

The response of most Americans is: You mean, you can't right now? No, you can't. If you hire a 20-year-old and take a dislike to his work three months in, tough: chances are you're stuck with him until midcentury. In France's immobilized economy, it's all but impossible to get fired. That is why it's all but impossible to get hired, especially if you belong to that first category of "youths" from the Muslim ghettos, where unemployment is around 40 percent to 50 percent.

The second group of "youths" -- the Sorbonne set -- protesting the proposed new, more flexible labor law ought to be able to understand it's both necessary to the nation and, indeed, in their own self-interest: They are after all their nation's elite. Yet they're like lemmings striking over the right to a steeper cliff -- and, naturally, the political class caved in to them.

When most of us on this side of the Atlantic think of "welfare queens," our mind's eye conjures some teenage crack whore with three kids by different men in a housing project. But France illustrates how absolute welfare corrupts absolutely. These Sorbonne welfare queens are Marie Antoinettes: Unemployment rates for immigrants? Let 'em eat cake, as long as our pampered existence is undisturbed.

Not all French youth is so self-deluded. I notice, for example, every time I'm across the pond in my corner of South Kensington that one hears more and more French spoken on the street. Somewhere between 400,000 and 500,000 French citizens live in Britain's capital. London is now the world's seventh-largest French-speaking city.

These are young talented dynamic people who like the same things about France the British and American tourists do -- the vin, the cuisine, the couture, the Provencal farmhouses and the Cote d'Azur's topless beaches -- but have concluded it is no longer a society in which you can fulfill your economic potential. They would presumably be Sarkozy supporters, but, like many who feel the odds are stacked against them, they chose in the end to bail out.

As for those who remain, they're sick of crime and unemployment and on the whole could do with rather fewer Muslims on the streets, but they're not yet willing to give up on the economic protectionism and lavish social programs that lead, inexorably, to the crime and unemployment and a general economic and demographic decline that leave the nation dependent on mass immigration and accelerating Islamization.

In my recent book, I cite one of those small anecdotes that seems almost too perfect a distillation of Continental politics. It was a news item from 2005: A fellow in Marseilles was charged with fraud because he lived with the dead body of his mother for five years in order to continue receiving her pension of 700 euros a month.

She was 94 when she croaked, so she had presumably been enjoying the old government check for a good three decades or so, but her son figured he might as well keep the money rolling in until her second century and, with her corpse tucked away under a pile of rubbish in the living room, the female telephone voice he put on for the benefit of the social services office was apparently convincing enough. As the Reuters headline put it: "Frenchman lived with dead mother to keep pension."

Think of France as that flat in Marseilles, and its economy as the dead mother, and the country's many state benefits as monsieur's deceased mom's benefits. To the outside observer, the French give the impression they can live with the stench of death as long as the government benefits keep coming. If that's the case, the new president will have the shortest of honeymoons.

Mark Steyn is the senior contributing editor for Hollinger Inc. Publications, senior North American columnist for Britain's Telegraph Group, North American editor for the Spectator, and a nationally syndicated columnist.
Posted by jtf at 6:52 AM