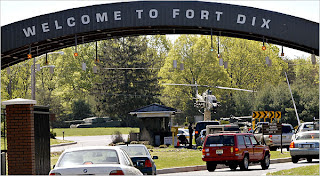 The story: four Albanian Muslims from Kosovo, plus a Turk and a Jordanian, are arrested for conspiring to attack Fort Dix, a military base in New Jersey, with AK47s and “to kill as many soldiers as possible” (U.S. Attorney’s Office).

The names of the four “Yugoslavs” are Dritan Duka, Eljvir Duka, Shain Duka (three brothers, all of them in the United States illegally), and Agron Abdullahu. Those are Albanian names, of course, but not one in a hundred Americans knows that. In fact, grasping that they are Albanians and knowing that “ethnic Albanian” plus “Muslim from the former Yugoslavia” equals “Kosovo,” is the privilege of experts. It is but one of many Balkan equations that mainstream media editors are determined to keep hidden from their consumers. That there is nothing in the federal complaint about the “Yugoslav” suspects’ origins is almost certainly the result of political interference.

White House spokesman Tony Snow was quick to assure us there is “no direct evidence” that the men arrested in the Fort Dix plot have ties to international terrorism. His meta-message is clear: The Administration knows it cannot keep the Albanian identity of four “Yugoslav” suspects concealed for ever, but it wants to pre-empt any suspicion that an independent KosovA would be a black hole of jihad-terrorism in the heart of Europe. Hastily denying the group’s link to al-Qaeda and other global networks is a political necessity for the proponents of Kosovo’s independence, not necessarily the reality.

Having been assured ad nauseam over the years by successive U.S. administrations that Kosovo’s Albanians are not really serious about their Islam, that even when they desecrate Christian churches and joyously rip crosses from their cupolas they do it for nationalist rather than jihadist reasons, the powers-that-be are doing their utmost to ensure that the public remains anesthetized. Asking when and how Albanian “secularists” became Islamic radicals is a no-no. Being so audacious as to wonder what this transformation bodes for a new, independent Muslim state in the heart of Europe is simply not on. Asking questions about major KLA figures’ documented links to jihad terrorism (including to Osama bin Laden personally) is polizeilich verboten. In the meantime, cadres, cash and ordnance linked to jihadist outrages all over Europe have been traced back to Kosovo, including the bombings in Madrid (March 2004) and London (July 2005), and a rocket attack on the U.S. embassy in Athens last year.

In New Jersey in May 2007, Kosovo blowback has finally reached America.

It is now essential to unmask the web of lies and distortions that has guided U.S. policy in the Balkans for years. The first step is to demand an explanation why and how Muslim Albanian terrorists from Kosovo were able to plan an operation here in the U.S. Why indeed: didn’t the U.S. military fight the Serbs for 78 days in 1999 so that they could have their ethnically clrean, Serbenfrei statelet? As a Washingtonian insider points out,

For almost a decade the U.S. government (or more precisely a handful of State Department bureaucrats and a few Congressmen) have placed the U.S. firmly on the side of the KLA and have helped created a haven for their operations. Even worse, KLA supporters in the United States have operated with virtual impunity, collecting money and weapons to support KLA operations not only in Kosovo, but in neighboring areas of southern Serbia, Montenegro, Macedonia, and northern Greece.

He reminds us that in 2004 Dutch television broadcast a documentary of Kosovo Albanian Muslims legally buying weapons in the U.S. and shipping them to Kosovo is support of their “liberation war” in violation of numerous U.S. laws, including the Neutrality Act: “The documentary then showed the same Albanians at a fundraiser in New York writing hefty checks to American politicians of both parties. There is no public indication that any action was taken by federal or state law enforcement agencies.”

But like the Bourbons of yore, KosovA enthusiasts inside the Beltway learn nothing and forget nothing. At last Tuesday’s open hearing of the House Committee on Foreign Affairs, titled “The Outlook for the Independence of Kosova” (sic!), the Committee’s Chairman, Rep. Tom Lantos (D-CA), declared urbi et orbi:

“Just a reminder to the predominantly Muslim-led governments in this world that here is yet another example that the United States leads the way for the creation of a predominantly Muslim country in the very heart of Europe. This should be noted by both responsible leaders of Islamic governments, such as Indonesia, and also for jihadists of all color and hue. [sic!] The United States’ principles are universal, and in this instance, the United States stands foursquare for the creation of an overwhelmingly Muslim country in the very heart of Europe.”

On that same occasion Ms. Rice’s No. 2, Under Secretary for Political Affairs Nicholas Burns, reiterated the U.S. position that immediate independence without standards or compromise is a must lest the Albanians get nasty: “the prospects for violence would be greater if we waited, because 92 to 94 percent of the people who now live in Kosovo are Albanian Muslims. They have been waiting a long, long time.”

Albanian Muslims, mind. Not Albanians, not “Kosovars,” not “Yugoslavs.” As Julia Gorin pointed out, Mr. Burns also didn’t miss the opportunity to invoke the usual Nazi imagery in reference to the Serbs, while praising the Kosovo prime minister Agim Ceku, an indicted Serb-slaughterer, as “impressive” and “worthy.” That’s the broad picture, dear reader, and a bunch of overexcitable, non-al-Qaeda-connected “Yugoslavs” from New Jersey will not be allowed to disturb it.
And yes, Mr. Lantos’s “jihadists of all color and hue” are taking note.