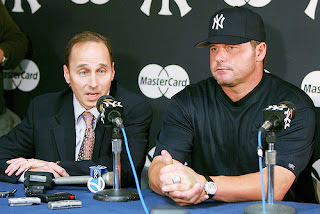 General Manager Brian Cashman of the New York Yankees (L) speaks to the media as the team announced the signing of Roger Clemens after the Yankees defeated the Seattle Mariners at Yankee Stadium.

He was a rookie with the Red Sox in 1984, the year after Carl Yastrzemski retired. He hasn't pitched for the Sox since 1996, and he last pitched against your team in October 2003 when he started the seventh game of the American League Championship Series at Yankee Stadium.

And now Roger Clemens is back with the New York Yankees, and he should be ready to pitch by June 1, which happens to be the night the Yankees next appear at Fenway Park.

Clemens. At Fenway. In a New York uniform. Again. It's almost as if the Great Bambino himself announced he was making a comeback with the Bronx Bombers.

The almost- biblical 100-year feud between the Red Sox and Yankees gathered steam today when the 44-year-old Clemens stood up in owner George Steinbrenner's box at Yankee Stadium and told a crowd of 52,553 he will be rejoining the Yankees, adding, "It's a privilege to be back." 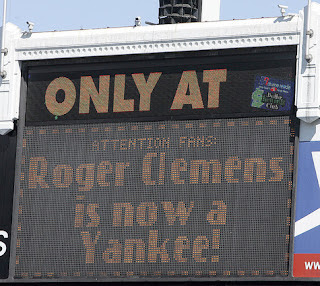 The scoreboard at Yankee Stadium tells fans that Roger Clemens is once again a member of the New York Yankees.


Some week here in the Hub. First we saw photos of uber-quarterback Tom Brady walking in the East Village wearing a Yankees cap and now the locally loathed Clemens is going back to the team Sox fans love to hate.

The decision was somewhat shocking given Clemens's cushy situation back home in Houston. His seven Cy Young Awards, 348 wins, and 4,604 career strikeouts allowed him to serve the National League Astros in a unique capacity. Clemens "retired" after he finished with the Yanks in 2003, but the 'Stros talked him into coming back, offering perks never before allowed in major league baseball.

In Houston, Clemens was allowed to stay home any day he wasn't pitching. He didn't have to make all the road trips, and he commuted to NL parks on private jets on the days he was needed. He didn't join the Astros until June 22 of 2006 and was paid a prorated salary of $22 million to go 7-6 with a 2.30 ERA in 19 starts. Meanwhile, his oldest son, Koby, was drafted by the Astros and joined Houston's minor league system.

The Rocket played the waiting game again this year and his agents, Randy and Alan Hendricks, said he would make a decision sometime in May. His options were the same: He could retire (again) or accept a deal from suitors in Boston, New York, or Houston. 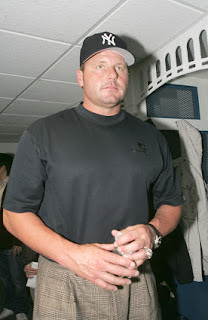 Roger Clemens leaves a press conference where it was announced that he is once again a member of the New York Yankees.

The Red Sox were active in their pursuit of Clemens, who won 192 games (tied with Cy Young for tops in franchise history) for Boston between 1984-96. Sox chairman Tom Werner produced a "We Love You, Roger" video and team executives visited him during the offseason. New York, however, is the place where Clemens won his only championship rings (1999, 2000) and the Yanks this year re acquired lefthander Andy Pettitte, Clemens's favorite teammate of the last decade.

Still, Houston was the likely choice for Clemens since it's close to home and NL lineups are less daunting than those in the AL.

In the end, it came down to Yankee desperation and Yankee money. The Yanks dropped five of six games to the Sox early this season and endured the indignity of being in last place despite a baseball-high $195 million payroll. Starting pitching has been the bane of the Yankees' existence, which made Clemens an attractive prospect. And so they offered Clemens a pro rated salary of $28 million, which makes him the highest-paid player in the game.

This was a high-stakes battle the Yankees could not afford to lose. The Sox beat them to the punch in acquiring Curt Schilling in 2003, Josh Beckett in 2005, and Daisuke Matsuzaka last winter. New York needs pitching more than Boston needs pitching, and this put Clemens in an enviable bargaining position with Steinbrenner and Co.

After the Sox beat the Twins in Minneapolis today, Schilling was asked his reaction to the Rocket's re-entry into the Yankees clubhouse. Ever the blowhard, Schilling declared, "We don't need him" -- a comment of stupefying arrogance that is sure to come up a couple of million times between now and the end of the 2007 postseason.

Clemens's return to the Yankees -- clearly motivated by money -- is certain to galvanize the anti-Rocket legions in Red Sox Nation. Roger-bashing has been a regional sport in New England since the end of the 20th century, when he got himself traded from the Blue Jays to the Yankees. Sox fans were able to tolerate a Cy Young-winning Clemens in Toronto largely because former Sox general manager Dan Duquette took the hit for failing to re-sign the Rocket and announcing Clemens was in the "twilight of his career."

That was 156 wins and four Cy Youngs ago.

It was while he was a member of the Yankees that Sox fans went to the dark side on Clemens. They cited his "we have to carry our own bags" interview from 1988 and accused him of laying down during his last four years (40-39) in Boston. They recoiled when he mounted a horse after winning the World Series in Yankee Stadium. His victories and three Cy Young trophies in Boston were conveniently dismissed. He became the enemy.

We thought we'd never see him again after he was routed in ALCS Game 7 in 2003. The Sox went on to win a World Series the next year and Clemens went on to dazzle National League hitters long after all his old teammates had retired.

Now he'll be back in the Fenway fire. In a Yankee uniform. The 2007 Red Sox season just got a lot more interesting.

Brady was wearing a Yankee hat but that is the only thing he has in common with Clemens. He took less to stay in Boston. Clemmens is about money and media attention. I hope they finish in last place.