Ralph Peters: What To Give Up

May 6, 2007 -- EACH time I visit Israel, I come home more pro-Israeli - and more worried about Israel's future.

The nation has been a stunning success, as close to a miracle as humanity achieved over the last, horrid century. But Israel is also a victim of that success. 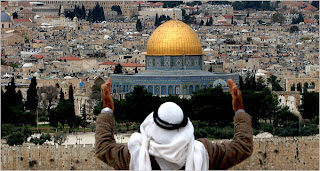 A Palestinian advises tourists on how to photograph the Dome of the Rock (Jerusalem).

Built - like the United States - by the "old country's" rejects and outsiders, Israel's triumph is a slap in Europe's face. Europe was comfortable with its image of the Jew as a narrow-shouldered rabbinical student the local toughs could bully. But Europeans don't like Jews with muscles.

As for Israel's neighbors, they had 13 centuries to make a go of "Palestine." Instead, they turned the Land of Milk and Honey into a desert.

The ecological reclamation of the land of Israel is nearly as dramatic as the creation of a Jewish state. (Indeed, environmentalists of real integrity should count among Israel's strongest advocates.) That return to the garden is as humiliating to feckless Arab cultures as their military defeats.

And we won't even talk about Israel's introduction of rule-of-law democracy into the wretchedly governed Middle East.

The point is that, whatever Israel does or doesn't do, it will always have plenty of enemies. No matter how self-destructive and murderous Palestinian behavior may be in Gaza, how nakedly corrupt Palestinian leaders are, or how hypocritical Arab governments remain, the global left will always make excuses for them, while blaming Israel for every boil on a terrorist's backside.

SO why should Israel surrender any land to its enemies, if it gets in return nothing but empty promises and more security problems?

The reason has nothing to do with justice or sense, but with one of those oddities of the international system, "world opinion." I wish Israel could keep every inch of ground it now holds. But the reality is that global leaders who don't know Gaza from Giza will demand that Israel give up turf.

Some of those pressures can be shrugged off. But not all.

In this unjust world, Israel will be forced to make very difficult choices. Some of the toughest will have to do with the land it must surrender to thugs who'll turn it into yet another patch of self-made Arab misery. And there's a very real danger that, for internal political reasons, a future Israeli government will make faulty decisions.

ISRAEL must be severely pragmatic, distinguishing between strategic terrain and evocative terrain - between those stretches of land critical to security and those whose appeal is purely emotional.

Sounds sensible and easy, but it isn't.

Israel's internal enemies are the rogue, extremist settlers who invoke a real-estate-magnate god to occupy West Bank territory that the state doesn't need and can't digest - and whose seizure plays into the hands of Israel's foes and complicates the support of her all-too-few friends.

Yet the fateful evolution of the Israeli parliamentary system has made those who return the least benefit to Israel - who drain its resources and give nothing back - into political kingmakers.

Jews who insist that their god cares more about a plot of bedeviled dirt than the reverence in their hearts are behaving like Arab militants (complete with the intolerance). No religious text is a valid deed.

Don't get me wrong: Jerusalem belongs to Israel. Christians have a stronger claim to Alexandria, Antioch and Istanbul than Muslims do to Jerusalem.

But when it comes to strategic terrain, forget about Hebron - the West Bank town that's home to less than 1,000 Israeli settlers, and well over 100,000 Palestinians. It's just one of the many settlements that hurt Israel's security instead of helping it.

SO what land truly matters to Israel's survival (assuming, for a moment, that Iran won't be permitted to build a nuclear arsenal)?

Israel can never surrender the Golan Heights. We might as well be honest about it. Syria repeatedly - three times - attacked Upper Galilee from the Golan. Three strikes and you're out.

Syria's a phony state, anyway, its borders drawn to please France. Israel has administered the Golan longer - and far better - than post-independence Damascus did.

Borders change. Get over it.

Elsewhere, though, traditional strategists have it wrong. They claim that whoever holds the mountainous "spine" running down through the West Bank controls the land that now comprises Israel. But Israel's survival and victorious wars disprove that "law."

What matters is control of the lines of communication - the roads - that enable Israel to shift military forces rapidly, and the control of foreign borders across which weapons can be infiltrated.

Thus, control of the Jordan Valley and its vital north-south highway is essential. The string of hilltop settlements east of Jerusalem that dominate the direct route to Jordan can never be given up.

And the recently floated scheme to swap Arab towns in northern Israel for part of the West Bank is madness - it would cost Israel control of a militarily vital highway from the coast into Galilee.

IN short, there are vital locations within the West Bank. They're just not the ones obsessing the fanatics who shame their faith.

If Israel doesn't do a cold- blooded analysis of what it truly needs to retain, the world will ask too much, its government will make decisions based upon political pressure rather than military necessity - and the result will be a far-worse mess than the withdrawal from the Gaza Strip created.

Israel must do what its survival requires. As the interim Winograd Report made clear on Monday, last summer's duel with Hezbollah was disastrous. Now Israel's enemies smell blood. Instead of the longed-for era of peace, we'll see no end of violence in the Middle East.

THERE'S no good solution to the region's problems. There may not even be any bad solutions that work. The failed civilization surrounding Israel may be hopeless - a possibility we pretend away because we cannot bear the implications.

But Israel can't pretend anything away. In a world in which so many openly seek its destruction - while others secretly long for the same thing - Israel is going to have to play flawless political chess. That means giving up the spaces on the board that don't help it checkmate its enemies.

Ralph Peters' most recent book is "Never Quit The Fight."
Posted by jtf at 8:56 AM