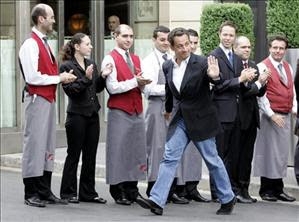 French President-elect Nicolas Sarkozy waves to supporters while leaving a hotel in Paris, Monday May 7, 2007. Sarkozy defeated Socialist Segolene Royal by 53.06 percent to 46.94 percent with an 84 percent voter turnout, according to final results released early Monday. It was a decisive victory for Sarkozy's vision of freer markets and toughness on crime and immigration.

I'm off to Paris! I hereby revoke every churlish remark I've ever made about those lovely Gallic people. (But in light of former New Jersey governor and current "gay American" Jim McGreevey's latest career move, I redouble everything I've ever said about the Episcopalians.)

With Nicolas Sarkozy's decisive victory as the new president of France, the French have produced their first pro-American ruler since Louis XVI.

In celebration of France's spectacular return to Western civilization, I bought a Herve Leger dress on Monday, and we're having croissants for breakfast every day this week. This delicate French pastry, by the way, is in the shape of a crescent to commemorate the Crusaders' victory over Islam. Aren't the French just peachy?

"Sarkozy the American," as he is known in France, called Muslim rioters "scum." Louis, I think this is the beginning of a beautiful friendship.

He explained his position on Muslim immigrants in France, saying: "Nobody has to, I repeat, live in France. But when you live in France, you respect its rules. That is to say that you are not a polygamist. ... One doesn't practice female genital mutilation on one's daughters, one doesn't slit the throat of the sheep, and one respects the republican rules."

Sarko never issued an apology or entered rehab. To the contrary, he said: "I called some individuals that I refuse to call 'youth' by the name they deserve. ... I never felt that by saying 'scum' I was being vulgar, hypocritical or insincere."

Is there a single American politician who would speak so clearly without then apologizing to Howard Dean?

At the Democratic presidential debate a few weeks ago, B. Hussein Obama carped that Bush had "alienate(d) the world community" and vowed that he would build "the sort of alliances and trust around the world that has been so lacking over the last six years."

Democrats are terrific at building alliances. Remember how Jimmy Carter won the love of the world by ditching our ally the Shah of Iran, allowing him be replaced by a string of crazy ayatollahs? Since then, we haven't heard a peep from that area of the world.

The smartest woman in the world sniped that she would "create alliances instead of alienation."

Yes, it was spellbinding how her husband charmed North Korean dictator Kim Il Sung and his sociopathic son Kim Jong Il by showering them with visits from Jimmy Carter and gifts from love-machine Madeleine Albright. And that was that: No more trouble from North Korea!

As I understand it, the center of the supposedly America-hating world is France. But now it turns out even the French don't hate America as much as liberals do.

Au contraire! (We can say that again!) Our Georgie is the most popular American with the French since Jerry Lewis.

All over the civilized world, voters are turning terrorist-coddling liberals out of office and voting for politicians friendly toward Bush, the world's sworn enemy of Islamic fascism.

Those foreign leaders so admired by Democrats for hating George Bush and loving Saddam Hussein are being replaced by rulers who pledge their friendship to the United States.

Retrospectively, B. Hussein Obama's answer about our most important ally being "the European Union" may eventually become true, thanks to Bush's ceaseless ally-making.

Australian Prime Minister John Howard is both the longest-serving Australian prime minister and — by his own account — the most conservative. As The New York Times rooted for his defeat in 2004, claiming Australians were furious with him for his support of the Iraq war, he won a historic third term.

Along with Howard, Bush's staunchest ally in the war on terrorism has been Britain's Labor Party leader Tony Blair. He's about to leave office — only to be replaced by a leader from the even more pro-American Conservative Party.

American celebrities who threaten to move out of the country every election rather than live under a conservative leader are running out of countries to move to.

Only Spain remains a nation of women. As long as Spain exists, it will not outlive the shame of its gutless capitulation to terrorist bombings in 2004. It is worse than Sweden's neutrality toward Hitler.

But France! Until this week, France seemed a less likely place to find someone who supports America than a meeting of Democrats.

The Democratic Party is now officially the only organization on Earth that does not take the threat of Islamic fascism seriously. Between the Democrats and the media, America has gone from its usual position as the world's last hope to radical Islam's last hope.