'Not about the truth' 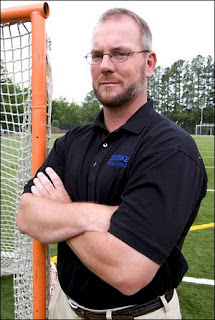 In "It's Not About the Truth," scheduled to reach bookstores June 12, Pressler and co-author Don Yaeger say Duke officials failed to support the players publicly and were more concerned about the university's image. They also hint at an attempted coverup.

"The thing that might be most disheartening to me is that ... the only people that have stood up and apologized ... were the players," Pressler says in the book. "The adults in this picture - the faculty, the administration - they haven't apologized for anything."

An investigation by the North Carolina attorney general has declared all three indicted players "innocent." Pressler, who said he was forced to resign, now coaches in Rhode Island.

Duke president Richard Brodhead and athletic director Joe Alleva both were criticized. The book also reveals that Pressler and the team kept a secret list of people they felt had wronged them, dubbed "The Grail."

Tom Butters, a former longtime Duke athletic director, also takes university officials to task in the book. "I know I am probably stepping on toes when I say this, but it was absurd," Butters says. "I wanted someone to step up for Mike and those kids."

Duke spokesman David Jarmul said, "From his first statement in March 2006, at a time when many seemed to accept the truth of the district attorney's charges, President Brodhead repeatedly emphasized the need for the students to be presumed innocent until proven otherwise within the legal system." He would not comment specifically on the book because, he said, it has yet to be issued.

At the outset, back in March 2006, the book says, Pressler and other Duke officials were so convinced that the allegations would go away that they gave bad advice to the players.

For example, co-captain Dan Flannery says that the assistant dean of students, Sue Wasiolek, told him, "Right now, you don't need an attorney. Just don't tell anyone, including your teammates or parents, and cooperate with police if they contact you."

The next day, eight police officers showed up at the house on North Buchanan, frisked the players, searched the house, and took them to the station for interviews and DNA tests.

Flannery now blames Wasiolek's advice for what followed. "We believed, albeit falsely, that these people would look after our best interests," he says in the book. When Durham police called Pressler on March 20 and asked for an informal meeting with players, the coach agreed.

In a recent interview, Wasiolek said she told the co-captains to tell the truth and cooperate fully with the police. "I don't recall saying that you don't need a lawyer," she said. "I also didn't tell them that they needed a lawyer. I don't recall it coming up."

Pressler admits in the book that he told the team not to tell anyone about the meeting. "I was told to keep it quiet," Pressler said. "Everybody. . . thought it was going to go away. There was no reason to bring more attention to it. So I interpreted that being, 'Hey, guys, it's going to go away, let's keep it in-house here. Don't tell your parents yet, don't tell your girlfriends. Keep it in house.'"

Some parents already knew and demanded a postponement.

At times, the book says, Duke officials expressed support for the players in private but not in public. On March 24, Pressler met with Alleva, along with other Duke officials and the team captains. Alleva told them only that they would be punished for throwing the party.

The next day, Brodhead decided the team would forfeit two games. In an emotional five-hour meeting with the team's parents that followed, Duke officials said they believed the players' accounts. But on March 26, Brodhead ordered the suspension of all future games.

On April 5, Alleva met with Pressler and Kennedy. Pressler says Alleva declared the season must be canceled. "What new has happened?" Pressler asked. "Joe, you told the players and the parents you believed their story."

Alleva replied, "It's not about the truth anymore."

Another Duke spokesman, John Burness, said university officials did not succumb to pressure and made decisions at the time based on what they believed was in the best interest of everyone involved.
Posted by jtf at 6:55 AM