Bob Klapisch: Clemens hopes to be the savior for Yanks 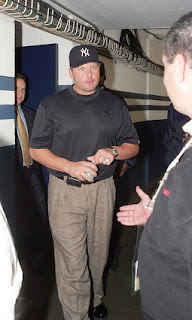 Roger Clemens leaves a press conference where it was announced that he is once again a member of the New York Yankees.

The announcement was closer to a public coronation, scripted so that Roger Clemens would be in everyone's face. Whether you love the Rocket or can't stand his bloated ego, one way or another, there was no ignoring him during the seventh-inning stretch. There he stood in George Steinbrenner's box, eclipsing Kate Smith and "God Bless America,'' telling the world he'll save the Yankees.

Clemens might be right, although the road to October is still littered with obstacles -- including the Red Sox, who still have the East's best rotation. The Yankees knew Clemens was the only hope of closing the talent gap, so when Rocket's representatives asked for a pro-rated $28 million contract (making him the game's highest-paid player) and unlimited travel privileges, the Bombers couldn't whip out the checkbook fast enough.

After all, they're not just paying for Clemens' 90-plus fastball, but his aura of invincibility, too. No one's made the Yankees feel entirely comfortable this year, not Andy Pettitte, not even Chien-Ming Wang, who was strangely struck down by a hamstring injury in spring training. The Bombers obsessively negotiated with Clemens over the weekend when it became obvious Carl Pavano had skipped out on them, and that Kei Igawa had become a more expensive version of Glendon Rusch.


Clemens? He raises the level of play of those around him -- an old-school, man's man who'll be as much a part of the Yankees' inner circle as the bookish Mike Mussina is not. Not everyone thinks Clemens is a hero, of course.

When informed that the Rocket had spurned the Red Sox, Curt Schilling told reporters, "We don't need him." Indeed, Red Sox Nation is counting down the days until the June 1-3 weekend series at Fenway, when Clemens just might make his 2007 debut. Then again, Joe Torre probably will wait until June 8, when the Yankees are at home against the Pirates, ensuring maximum psychological protection.

Whether it's sooner or later, Clemens eventually will come face to face with the Sox, who have intimidated the entire Yankee staff. Slaying Boston is Clemens' mandate; it's what they're paying him for. The real question, of course, is just how effective the Rocket will be, given his age (44) and his return to the American League's more challenging lineups.

The Rocket will assume the role of the Yankees' ace, although it's worth remembering he averaged fewer than six innings per start with the Astros last year. Nor will Clemens come close to duplicating his 2.30 ERA in 2006; the high 3's is a more realistic target. That might not be a breathtaking profile, but it's good enough to at least make the Yankees favorites for the wild card. 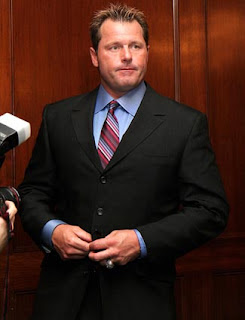 That's saying a lot, considering how overwhelmed this team looked in April. Everyone except Alex Rodriguez, it seemed, was hurt or slumping. Even Torre looked scared in losing 5-of-6 to Boston. The Yankees paid a heavy price for passing on Daisuke Matsuzaka, choosing Igawa over Ted Lilly, and convincing themselves that Pavano really wanted to pitch in 2007. Turns out Pavano's visit to Dr. James Andrews on Friday confirmed what teammates have been whispering all along: Tests showed there's no rupture in Pavano's elbow, no torn ligaments, just normal wear and tear.

The Yankees want Pavano to rehab his injury, but the pitcher is insisting on Tommy John surgery that will end his career in pinstripes. Given that backdrop, is it any wonder the Yankees didn't let the Astros and Red Sox get a sniff of the negotiation with Clemens? Houston owner Drayton McLane said he was disappointed and surprised -- he had his last conversation with agent Randy Hendricks two weeks ago -- but the Astros' Lance Berkman seemed better prepared for Clemens' exodus.

"With this Rocket situation there's two kinds of people: People that are not surprised and morons," Berkman told the Houston Chronicle. "Where else was he going to go? He wasn't going to come back here. From the moment Pettitte signed with the Yankees, there was 100 percent certainty that that's where he was going."

The Red Sox had a small window of opportunity Thursday, when Hendricks met with general manager Theo Epstein at Fenway. The Sox, however, weren't prepared to move as fast as the Yankees, nor did they seem inclined to pay Clemens $4.5 million a month.

Indeed, the math borders on the absurd. If Clemens does return June 1, he'll be on a pace for 22 starts, which should translate to 10-12 wins. That's some $1.8 million per victory. Only the very rich (and very desperate) make deals like that.

But don't expect the Yankees to apologize for overpaying Clemens, not after they plunged into last place with a 10 percent payroll cut. At whatever cost, the Bombers needed a change in karma. They're into their seventh year without a championship and by now it's obvious that a nuclear offense, by itself, is a guarantee of postseason failure. The Yankees have to win low-scoring games in October. They have to prevail in a Game 7 setting. Kevin Brown couldn't do it. Randy Johnson couldn't, either.

So the Yankees turn a needy gaze toward Clemens, who has the arm, the pedigree and the ego to save them. It's a smart move, even if the payout is crazy. Was there any other choice?
Posted by jtf at 6:24 AM