The Satire Is Biting, and So Are the Zombies 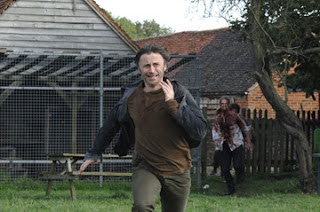 Nothing satisfies the appetite for allegory quite like a movie about flesh-eating zombies. Somehow the genre, at least as practiced by its masters, has the capacity to illuminate some brute facts about the human condition and its contemporary dysfunctions. There are not many recent movies that match, for example, the social criticism undertaken by George Romero in his “Living Dead” cycle.

Danny Boyle’s “28 Days Later” and its new sequel, “28 Weeks Later,” directed by Juan Carlos Fresnadillo, may not quite be in Mr. Romero’s league, but at their best they come close to his signature blend of grisly horror, emotional impact and biting satire. There is, of course, plenty of literal biting as well, since the virus-crazed creatures known as infecteds crave the flesh and blood of their erstwhile fellow citizens.

And also their metaphorical flesh and blood. The first movie, set in the early days of a pandemic that nearly wiped out the population of Britain, followed a small band of strangers who came together to form a makeshift tribe. This time, after the first wave of the virus seems to have run its course, the focus is on families and comrades split apart and set against one another by paranoia, moral confusion and the endless conflict between the survival instinct and the call of duty. If “28 Days Later” was, in part, about the emergence of solidarity in the midst of crisis, “28 Weeks Later” is about the breakdown that occurs in what seems to be the aftermath.

The DVD of Mr. Boyle’s film has two alternate endings, one slightly more comforting than the other. The hopeful conclusion (the one originally released in American theaters) turns out to be a slender thread leading to Mr. Fresnadillo’s more hectic and somewhat grimmer sequel. 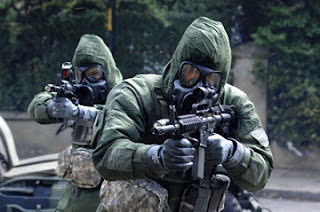 A few months later, he is safe in the Green Zone, an island of security in London overseen by occupying American troops led by General Stone (Idris Elba). There, he is reunited with his children, Andy (Mackintosh Muggleton) and Tammy (Imogen Poots), who had been on a school trip to Spain during the initial outbreak. He lies to them about their mother’s fate, and his dishonesty is punished in due course.

That bit about American soldiers patrolling the Green Zone — see what I mean about allegory? — may make “28 Weeks Later” sound heavy-handedly topical. But as in any good science fiction fable, the analogies it offers to contemporary reality are speculative rather than obvious. The initial benevolence of the occupation is clear enough: a shattered country needs to be put back together, its remaining population protected and reassured.

It is only when things spin out of control that the inherent brutality of the situation becomes clear, but here again the movie poses intractable conundrums rather than scoring easy points. To the soldiers and the survivors alike, there are only bad choices, and doing what seems like the right thing — firebombing an open city or rescuing children from the bombs — can turn out to have horrendous consequences.

Mr. Fresnadillo’s first movie, the Spanish-language thriller “Intacto,” showed him to be a filmmaker with technical agility and a decidedly philosophical bent. Here the thinking is done on the run, as the collapse of order unfolds through scenes of panic and chaos. These are often too frenetically edited and murkily lighted to be truly scary, and the higher dose of gore — infecteds chopped up by helicopter blades; bodies exploding in blood as bullets fly into them — is not enough to increase the horror. 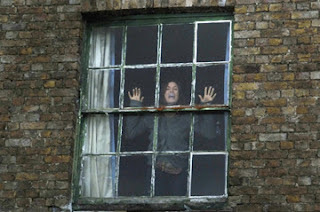 The real terror comes at quieter moments, when aerial shots survey the echoing emptiness of London, or when Tammy and Andy sneak out of the Green Zone into the surrounding desolation.

“London’s mine,” Andy exclaims, and the claustrophobic suspense of the film is occasionally leavened by a sense of adventure. The threat of death brings out noble impulses as well as selfish ones. Don’s cowardice stands in contrast to the selflessness of some of the American soldiers: Scarlet (Rose Byrne), a medical officer; Doyle (Jeremy Renner), a sniper whose conscience gets the better of him; and, more reluctantly, Flynn (Harold Perrineau), a chopper pilot with pictures of his kids taped above the windshield.

“28 Weeks Later” is not for the faint of heart or the weak of stomach. It is brutal and almost exhaustingly terrifying, as any respectable zombie movie should be. It is also bracingly smart, both in its ideas and in its techniques. The last shot brought a burst of laughter at the screening I attended, a reaction that seemed to me both an acknowledgment of Mr. Fresnadillo’s wit and a defense against his merciless rigor.

Anyway, I was glad the person next to me was laughing, rather than chewing through my neck. That level of horror will have to wait for the next sequel.