George F. Will: The Dignified Slugger From Mobile MOBILE, Ala. -- This city has belonged to five nations -- France, Britain, Spain, the United States and the Confederate States of America. Or four, if you think, as Lincoln did, that the Southern states never succeeded in seceding, so the CSA never existed. In any case, Mobile has done much for the national pastime of the country to which it currently belongs.

Mobile has incubated tremendous major league talent. In a few games in 1969, the "Miracle Mets" had an all-Mobile outfield. Five Hall of Famers were raised here -- Satchel Paige, Willie McCovey, Ozzie Smith, Billy Williams and the man whose achievements gain luster from the contrast between him and the man who may soon surpass one of those achievements. As Barry Bonds continues his gimpy, joyless pursuit of such glory as he is eligible for, consider the odyssey of Mobile's greatest native son. 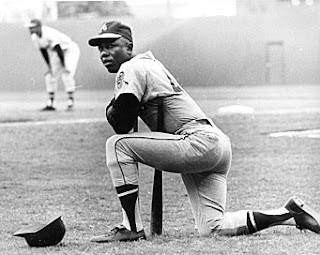 Hank Aaron is known for being a home run hitter, but he was a five-tool player who could do everything. He hit .300 or better 14 times, averaged just 63 strikeouts a season, stole 240 bases in his career and won three Gold Gloves in the outfield.


Henry Aaron's parents had moved south from Selma, drawn by work in the shipyards during World War II. So many blacks came here that Davis Avenue -- named for Jefferson Davis -- became known as Little Harlem.

You think that is incongruous? Try this. Grip a bat as a right-hander -- but with your left hand on top. That is how the man who would hit 755 home runs in 23 major league seasons gripped his bat when, as an utterly uncoached 17-year-old, he signed his first professional contract, with the Indianapolis Clowns of the Negro leagues, who recognized an uncut diamond.

When he boarded the train to his future, he had $2 in his pocket. He had never had his own bed, and with the Clowns he often slept six nights a week in a bus. He remembers sitting with teammates in a Washington restaurant "hearing them break all the plates in the kitchen after we were finished eating."

Aaron's signing bonus with the Milwaukee Braves was a cardboard suitcase. In his first spring training, during a game against the Red Sox, Ted Williams came running from the clubhouse to see whose bat was making that distinctive sound. The bat had a slender handle and was whipped by wrists developed hitting bottle caps that dipped and floated after being pitched by Aaron's playmates when, as was usual, baseballs were scarce. 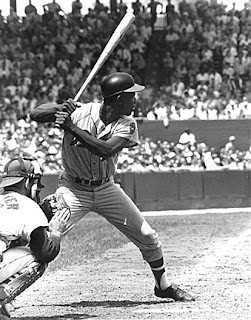 Hank Aaron hit .355 in 1959 to win the second batting title of his career -- the first was in 1956 (.328). Aaron recalled he was seeing the ball so well that season "that I stopped going to movies for a while because I didn't want anything to affect my eyes." Aaron also led the league in slugging percentage (.636) and hits (223) that season.


He was 0 for 5 in his first regular season game, which was the first day in which players were no longer allowed to toss their gloves on the field when coming in to bat. Soon, however, Time magazine was heralding "The Talented Shuffler" who "is not as dumb as he looks when he shuffles around the field." Misperceiving, through the lens of race, economy of motion for lethargy, sportswriters called him "uncomplicated" and "a child of nature." Lonnie Wheeler, who helped Aaron write his autobiography, "I Had a Hammer," notes that Joe DiMaggio's similar understated manner was characterized as dignified and graceful.

In 1973, as Aaron approached Babe Ruth's record of 714 home runs -- he was to break it in April 1974 -- he received, according to the U.S. Postal Service, about 930,000 letters, more than any nonpolitician in America. Dinah Shore was second with 60,000. Much of his mail was hateful. He took out his anger on baseballs. The 1973 season was the last in which horsehide balls were used. Aaron's 714th was the first home run ever hit with a cowhide ball. 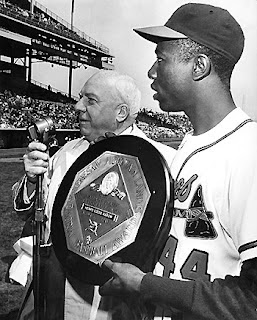 National League president Warren Giles presents Hank Aaron with the 1957 NL MVP award. Aaron hit .322 for the Milwaukee Braves in 1957 and led the NL in home runs (44), runs scored (118) and RBIs (132). Aaron's offense carried over into the postseason as he hit .393 against the Yankees to help give the Braves their only World Series title in Milwaukee.


When Aaron retired, he was Major League Baseball's last link to the Negro leagues. Today he is baseball's link to the era when home runs did not cause fans, suspecting steroids, to view sluggers with a moral squint. Aaron became baseball's most methodical -- and, properly measured by total bases, most effective -- hitter after being raised in a household where, he remembers, "we almost never ate anything that was store-bought. I've gone many, many weeks with just cornbread, butter beans and collard greens."

Mobile's public library, writes Wheeler, "opened its doors to blacks before other Southern cities encouraged them to read." Spring Hill College here, which integrated -- by conscience, not coercion -- in 1954, was praised by Martin Luther King in his "Letter from Birmingham Jail." Today, if you turn onto Satchel Paige Drive, then onto Bolling Brothers Boulevard (Frank and Milt, nephews of a major leaguer, played a combined 19 seasons), you reach Hank Aaron Stadium, home of the Mobile BayBears.

When Bonds hits his 756th, real fans, who know how to read the record book, will yawn, confident that Aaron's record will remain the real one until Alex Rodriguez, who has 175 more home runs than Bonds did when he was Rodriguez's age, breaks it.

georgewill@washpost.com
Posted by jtf at 8:02 AM

Email ThisBlogThis!Share to TwitterShare to FacebookShare to Pinterest
Labels: Baseball, George Will