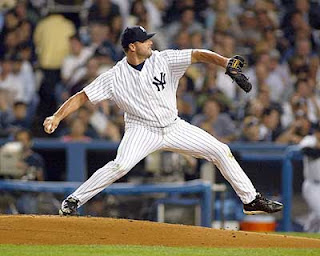 By Jamshid Mousavinezhad and The Associated Press

Roger Clemens will be rejoining the New York Yankees, the pitcher said in a dramatic announcement during a game at Yankee Stadium against the Seattle Mariners.

Clemens said he picked the Yankees over the Boston Red Sox, and the Houston Astros, his team for the past three years.

Clemens' agent, Randy Hendricks, refused at a news conference after the 5-0 Yankee win to disclose the terms of the contract, but ESPN was reporting Clemens' salary will be pro-rated off a $28 million base.

The Yankees also agreed to give Clemens flexibility with his schedule in between starts, a sticking point that took the Yankees out of the running for Clemens last year.

At the end of the seventh-inning stretch, Yankees public address announcer Bob Sheppard told fans to turn their attention to Yankees owner George Steinbrenner's box, where Clemens was standing with a microphone.

As the video scoreboard in right-center televised Clemens, the seven-time Cy Young Award winner made the announcement himself.

"Well, they came and got me out of Texas and I can tell you it's a privilege to be back," Clemens said. "I'll be talking to y'all soon."

The fans erupted with cheers, with many yanking out their cellphones to spread the news.

"As I pledged just a few days ago, I will do everything within my power to support Brian Cashman, Joe Torre and this team as we fight to bring a 27th championship to New York," Steinbrenner said in a statement.

"Roger Clemens is a winner and a champion, and he is someone who can be counted on to help make this season one that all Yankees fans can be proud of. The sole mission of this organization is to win a world championship."

In an interview during the game, Clemens said "everything happened so fast," and that he hopes to make his first start by the end of the month.

The Yankees are scheduled to start a series in Boston against the Red Sox on June 1.

Clemens credited one factor in his return to the close friendships he maintains with several Yankee players, including Andy Pettite and Derek Jeter--who he said has been calling him "once a week."

Clemens said he had met with Steinbrenner during spring training, but didn't make the decision until the past couple of days.

"I'm about at playing weight right now," he said. "I feel pretty good.

Clemens left the Yankees after the 2003 season, saying he was retiring, but after Andy Pettitte signed with the Houston Astros, Clemens followed his friend to their hometown team.

Pettitte returned to the Yankees this year, and Clemens followed on Sunday.

"It's another challenge," Clemens said. "I expect to do things at the age of 44, 45 like I did at 25." The Yankees have been beset by a rash of injuries to their pitching staff, contributing to a disappointing 14-15 start.