Springsteen's Magic: Darkness in the Center of Town 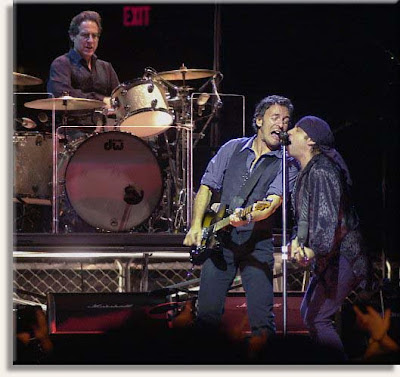 
As I listened to Magic, the new (and maybe last?) album from Bruce Springsteen and the E Street Band, I thought of a buddy and a movie.

A few days ago, a pal of mine, who had spent about a year in Iraq in a nonmilitary but intense position, told me about a recent episode. He had gone to a bar on a weekend night and had fallen into a dispute with a bouncer--a big bouncer. My friend, who's not that young and not that fit, surprised himself by becoming highly aggressive with the bouncer. He was ready for a fight--eager for it--knowing damn well that if one came his way, he would end up on the downside of the deal. Fortunate for him, the moment was defused, and he moved on intact. "That's not me," he told me. "That's Iraq. After being there, you feel you don't have to put up with anything here and what happens here is nothing compared to what happens there."

In Paul Haggis's new film, In the Valley of Elah, GIs come back from Iraq with a different attitude toward violence and death. The war has changed them--not by robbing them of limbs, but by stealing them of innocence (yes, a cliche) and, more important, by undermining their sense of decency. To say too much would be to give away the mystery in the movie. But Haggis's point is that besides the obvious impact of the war--the death count, the physical wounds, the mental injuries (such as post-traumatic stress disorder), there are other costs--subtle but deep--to turning young men and women into killers forced to make choices no one ought to have to face.

As Haggis's film and my friend's experience illustrate, there is a consequence of war that does not fit into the box scores of lives lost, troops hospitalized, and money spent. It's what warring turns us into. And that seems to have been on Springsteen's mind when he penned the foundational songs of Magic.

Much of the album is imbued with a melancholy and a sense of loss, even when Springsteen deploys the power chords, searing guitars, and cascading piano that once (oh so long ago) underscored themes of youthful exuberance, rebellion and escape. This loaded-with-hooks album has its obvious moments. On "Last To Die," Springsteen sings, "Who'll be the last to die for a mistake?" It's John Kerry's once-famous line rock-and-rollified. (In the last election, Springsteen campaigned with Kerry.) "The wise men were all fools," Springsteen wails, as drums pound. Neocons, take note.

But on other tracks, Springsteen eschews the big picture for the nitty-gritty, chronicling broken souls and detailing lovers lost in grief, all apparent victims of a faraway war. On the elegiac "Devil's Arcade," a gravely wounded soldier lies in bed at home and feels "the glorious kingdom of the sun" on his face, as the song's narrator--probably his wife--asks him to "just whisper the word 'tomorrow' in my ear." In the pop-infused (maybe too infused) "Livin' in the Future," a fellow who's received a letter saying "somethin' 'bout me and you never seein' one another again" feels untethered from the present moment. "My faith's been torn asunder," he says, "tell me is that rollin' thunder/Or just the sinkin' sound of somethin' righteous goin' under?"

Well, the answer is clear. The ship's gone down, and folks are left to deal with the wreckage on their own. And the grand sum of all these individual tragedies marks a societal demise. On the title track--a somber, violin-draped number--Springsteen sings of a magician who moves from making a coin disappear to sawing a volunteer into two. "I'll cut you in half," the sly trickster says, "while you're smiling ear to ear. And the freedom that you sought's driftin' like a ghost among the trees." As Springsteen has acknowledged, this song is about the Bush administration, and the Bush-Cheney magic act ends apocalyptically:

Now there's a fire down below
But it's comin' up here
So leave everything you know
And carry only what you fear
On the road the sun is sinkin' low
There's bodies hangin' in the trees
This is what will be, this is what will be.

There's a lot more than darkness on the edge of town. There's ruin. Yet overall the album's music does not match it's downhearted view. Springsteen creeps along a tight rope, balancing his musical brightness with his belief the nation has lost its soul at the hands of deceivers.

He ties it all together, though, in "Long Walk Home." Against Springsteen's long-perfected anthemic bar-band sound, he sings of returning--that is, trying to return--to his home town. But things ain't the same. The place is full of strangers. The veterans hall is closed: "The diner was shuttered and boarded/With a sign that just said 'gone.'" He recalls his father once telling him,

Son, we're luck in this town
It's a beautiful place to be born
it just wraps its arms around you
Nobody crowds you, nobody goes it alone.
That you know flag flying over the courthouse
Means certain things are set in stone
Who we are, what we'll do and what we won't.

It's no secret; he's talking not about a fine ol' town but about the romanticized American ideal. Whether it ever truly existed on the ground can be debated. (Remember "Born in the U.S.A"?) But what's for sure is that it's promise has been trampled by the current gang. And the war's one helluva tipping point. In this song, Springsteen's narrator sings, "Hey pretty Darling, don't wait up for me/Gonna be a long walk home."

Springsteen, whose last album was a romping collection of pumped-up versions of songs associated with Pete Seeger, is not wallowing in nostalgia. (Bodies hanging in the trees? We're way past nostalgia, he seems to be saying.) He's expressing a desire. Rock and roll has always been about yearning. In earlier days, it was about longing for sex, love, a fast car, flight. You know, "it's a death trap, it's a suicide rap," and so on. But as he surveys the horizon and sees a nation in trouble, that small town Springsteen wanted to flee as a young man doesn't look so bad now--that is, as a symbol of America's best values: community, compassion, the rule of law. So he's brought the band together and called upon the rock idiom he knows so well to share his present-day yearnings. At the age of 58, Springsteen knows that it's not about running away, it's about walking back. And though the music soars, his message is mired in realism: this walk is not going to be easy.
Posted by jtf at 7:00 AM