Marion Jones Admits to Steroid Use 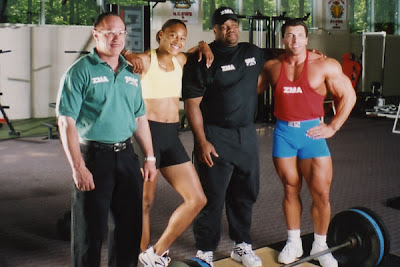 Track star Marion Jones has acknowledged using steroids as she prepared for the 2000 Summer Games in Sydney and is scheduled to plead guilty today in New York to two counts of lying to federal agents about her drug use and an unrelated financial matter, according to a letter Jones sent to close family and friends.

Jones, who won five medals at the Sydney Olympics, said she took the steroid known as "the clear" for two years beginning in 1999, according to the letter. A source familiar with Jones's legal situation who requested anonymity confirmed the relevant facts that were described in the letter.

"I want to apologize to you all for all of this," Jones said. "I am sorry for disappointing you all in so many ways."

Jones's admissions could cost her the three gold and two bronze medals she won in Sydney while enlarging the cloud of doubt hovering over Olympic and professional sports, which have been tarred in recent years with accusations of performance-enhancing drug use, steroids busts and positive drug tests by prominent athletes.

In December 2004, the International Olympic Committee opened an investigation into allegations surrounding steroid use by Jones, once considered the greatest female athlete in the world. In the past, Jones has vehemently denied using steroids or any performance-enhancing drugs.

"This is a shame," World Anti-Doping Agency Chairman Dick Pound said in a telephone interview yesterday. "This was America's darling at the 2000 Summer Olympics. . . . I hope this will have a deterrent effect. It's not merely cheating in sports, but now she has lied her way to exposure to penal sanctions."

In the letter, Jones, who will turn 32 next Friday, said her former coach, Trevor Graham, gave her the substance, telling her it was the nutritional supplement flaxseed oil and that she should take it by putting two drops under her tongue. Graham, contacted by telephone yesterday, declined to comment.

Jones said she "trusted [Graham] and never thought for one second" she was using a performance-enhancing drug until after she left Graham's Raleigh, N.C.-based training camp at the end of 2002. "Red flags should have been raised in my head when he told me not to tell anyone about" the supplement program, she said. She also said she noticed changes in how her body felt and how she was able to recover from workouts after she stopped taking the substance in 2001.

The clear, also known as THG, or tetrahydrogestrinone, is a powerful anabolic steroid that was at the center of the federal investigation into the Bay Area Laboratory Co-operative, or Balco. More than a dozen track and field athletes have faced punishments for their use of the clear, which drug-testing authorities were unable to detect until Graham sent a sample of it to the U.S. Anti-Doping Agency in 2003.

Baseball players Gary Sheffield and Jason Giambi admitted during grand jury testimony to using the clear, according to reports in the San Francisco Chronicle. Outfielder Barry Bonds also admitted using a substance that he said he had been told was flaxseed oil by his personal trainer, the Chronicle reported.

Jones's coach, Graham, was indicted last November on three counts of lying to federal agents connected to the investigation. He has pleaded not guilty and his trial is scheduled for November.

Jones, who recently married former sprinter Obadele Thompson, said in her letter that she planned to fly from her home in Austin and meet her mother in New York, where she was scheduled to enter the plea today in U.S. District Court. She said she faced up to six months in jail and would be sentenced in three months. Federal sentencing guidelines call for a maximum of five years in prison for one count of lying to federal agents.

Reached at their Austin home, Thompson declined comment on the letter, portions of which were read to him, saying: "The process has to go through before you can make any comments. . . . I'm sure at the appropriate time, all necessary comments will be made." He did not dispute the contents of the letter. He said Jones was unavailable to comment.

When questioned in 2003 by federal agents investigating Balco, Jones lied about using the clear even though agents presented her with a sample of the substance and she immediately recognized it as what she had taken at Graham's behest, Jones said in the letter. She said she lied because she panicked and wanted to protect herself and her coach.

Jones also said in the letter that she lied about a $25,000 check given to her by track athlete Tim Montgomery, the father of her young son who pleaded guilty in New York this year for his part in a multimillion-dollar bank fraud and money-laundering scheme.

Jones said she told investigators she knew nothing about the deposit, even though Montgomery told her it was from the 2005 sale of a refurbished vehicle and was partial payment for $50,000 she had loaned him.

"Once again, I panicked," she wrote. "I did not want my name associated with this mess. I wanted to stay as far away from it as possible."

Professional athletes will ALWAYS be viewed as role models to someone's child(ren) all over the world. There is nothing we can do about that. Instead of "stripping" the pros of the role model status, discuss the unethical or wrong things they do, explain to children how to make better decisions, and get over it! What about the Lindsay Lohans and Britney Spears of the world? They're someone's role model too. Quit harping on athletes and focus on raising your children at home. Athletes are human beings and should be viewed as just that - no one is perfect. Children have parents that are role models to them, so when the parents mess up, should the children stop believing in them too? I don't think so! If this country is really worried about what is best for our children, then stop idolizing sex, alcohol and drugs also! Marion Jones is a big person for apologizing and she ultimately has to deal with the consequences. She has always been a great track star, regardless of the controversy surrounding her.