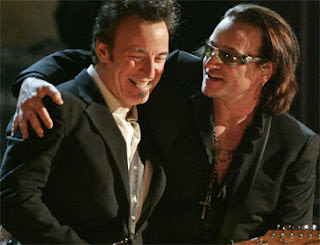 When U2 entered the Rock and Roll Hall of Fame in 2005, Bruce Springsteen gave the induction speech, perfectly summarizing U2's righteous and occasionally ridiculous sense of grandeur. Two years later, Springsteen has made an album that brings his Irish counterparts to mind, and not just because of its sonic spaciousness.
"Magic" (Sony Music), Springsteen's first album with the E Street Band since 2002's "The Rising," is his equivalent of "All That You Can't Leave Behind." As that album righted U2's ship after years of off-course wandering, "Magic" is built on comfortably familiar gestures pointing to past glories. The operatic sweep recalls the seamless unity of Springsteen's first great classic "Born to Run," with the large scope of "Born in the U.S.A."

It's the exact opposite of 2005's "Devils & Dust," which matched a stripped-down sound with large life-and-death themes. Lyrically, "Magic" is personal, and most of its politics are implied rather than specified. "Last to Die" cribs a title from John Kerry's 2004 campaign, which Springsteen backed, yet it could be about a crime spree as easily as commentary on world events.

"Magic" commences with "Radio Nowhere," Springsteen's best rocker in recent memory. "Gypsy Biker" and "Long Walk Home" almost cry out for cameos from Bono. And Springsteen's affinity for street-corner dramatics is in full effect with "Livin' in the Future," a kissin' cousin to the "Born to Run" hit "Tenth Avenue Freeze-Out."

But the heart of "Magic" is its pure-pop songs, the Phil Spector-style wall of sound on "Girls in Their Summer Clothes" and "Your Own Worst Enemy." With its jingling bells and stately tempo, the latter sounds Christmasy enough that the subject could be Santa.

Springsteen turns down the volume with "Terry's Song," an acoustic ode to Terry Magovern, his bodyguard, who died in July at age 67. "Love is a power greater than death, just like the songs and stories told," Springsteen sings. "When she built you, brother, she broke the mold."

Bono couldn't have put it better.
Posted by jtf at 6:46 PM

Email ThisBlogThis!Share to TwitterShare to FacebookShare to Pinterest
Labels: Bruce Springsteen, U2