At the Wachovia Center, the Boss restored one’s faith in rock and roll 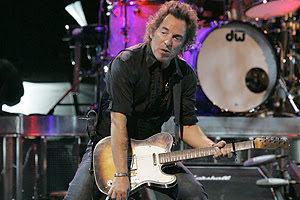 Bruce Springsteen & the E Street Band concerts have a reputation that's 30+ years long to live up to as exhausting and exhilarating marathons that mix together enough musical inspiration and working-class perspiration to restore one's faith in the redemptive powers of rock and roll.

On Friday night at the Wachovia Center, Springsteen took the stage dressed in black to the introductory instrumental strains of "The Daring Young Man on the Flying Trapeze," and shouted out a question to the sold-out crowd of middle-aged moms and dads (and their sons and daughters): "Is there anybody alive out there?"

The two-hour-and-fifteen-minute show that followed - beginning with the hard-driving, straight to the solar plexus "Radio Nowhere," the first single from the 58-year-old Jersey guy's new album, Magic - certainly lived up to his vaunted rep, even if it was a little short by Springsteenian standards.

The road to redemption on this night, though, was a rocky one.

That's partly because Philadelphia was only the second stop on this tour, so momentum didn't always flow effortlessly and all the transitions in the 23-song set, which came to a close with the reeling Irish immigrant saga "American Land," weren't seamless.

But it's largely because Springsteen doesn't go in for easily won, fairy-tale happy endings. And beneath its rollicking veneer, Magic is a dark journey through a house of mirrors of mistrust and deceit. 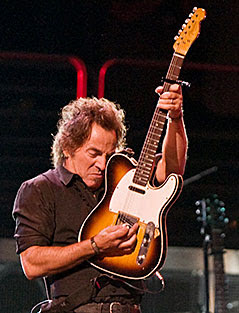 The Boss filled Friday night's set with songs from his catalog whose protagonists feel the ground shake beneath their feet, like Tunnel of Love's "Brilliant Disguise," whose hero asks for "mercy on the man who doubts what he's sure of." Or the guy from the bleak Nebraska in "Reason To Believe," which was transformed into a rowdy roadhouse blues, who can't understand how people find the faith to keep on keepin' on.

The E Streeters first with Springsteen in town since 2003 was filled with rousing rockers, many of which, from "Promised Land" to "Waitin' On A Sunny Day," made use of Clarence Clemons' wailing saxophone, almost always a signal of communal strength in a Springsteen song.

The three lead guitarists all got their licks in: Nils Lofgren, the most gifted of the bunch, Steve Van Zandt, Sylvio Dante in a black babushka and snakeskin boots, and Springsteen, who played a five-alarm lead on "Candy's Room."

But on a tour that's about getting back to rock and roll fundamentals, Soozie Tyrell's violin is as key an instrument as the guitar. Her sorrowful fiddle keyed the new album's title track, which "isn't about magic, it's about tricks," Springsteen said, as well as the gorgeously wrought war story "Devil's Arcade" and warmly melodic streetscape "Girls In Their Summer Clothes."

Springsteen did most of his talking early on, before Magic's deceptively jaunty "Livin' In The Future."

He said Philadelphia was full of things "we love about America: Philly cheese steaks . . . the Bill of Rights . . . baseball. I predict they will rise, though I can't guarantee it!"

Then he grew more serious, saying the song was about "things happening these last six years that we never thought would happen in America: illegal wiretapping, no right to habeas corpus, the rolling back of civil liberties."

The blue state crowd greeted him with some cheers, and some boos.

The intertwining of the personal and the political was more powerfully expressed musically in a four strong stretch that brought the show to an emotional crescendo. The title track to Springsteen post-9/11 album, "The Rising," which seeks spiritual answers to the horrors of the Twin Towers falling, was followed by "Last To Die," which traces the death toll in Iraq to a belligerent response to Sept. 11.

Then came "A Long Walk Home," a hymn that slowly built the strength to believe that faith can be restored. And that was followed by "Badlands," the rousing warhorse that sounded as fresh as the day it was born and found the redemption Springsteen was looking for, every inch of it earned.

Bruce Springsteen and the E Street Band will play at the Wachovia Center again at 7:30 Saturday night. The show is sold out.


The set list from Friday night's Bruce Springsteen concert at the Wachovia Center: