Book Review: "The Day of Battle" 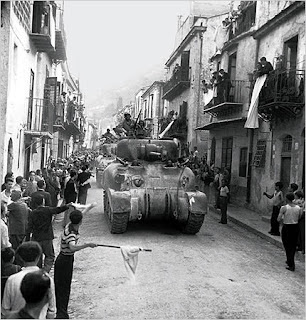 In the 62 years since its end, thousands of books have been written about World War II, yet a new in-depth work on the major battles and campaigns is always to be welcomed. In an age when travel is easier than it has ever been, and technology increasingly helpful to the historical sleuth, it is possible — with the solace of a half-decent publisher’s advance — to visit battlefields and archives around the world, and then to produce a book containing genuinely new material and perspectives.

Rick Atkinson proved what a determined and assiduous researcher could achieve in “An Army at Dawn,” his best-selling account of the North Africa campaign, and he has been no less thorough in “The Day of Battle,” the second part of a projected “liberation” trilogy. But while there is new material here — like information about the deaths of Allied servicemen from American mustard gas at Bari — it is his ability to ferret out astonishing amounts of detail and marshal it into a highly readable whole that gives Atkinson the edge over most writers in this field.

Anyone who devoured “An Army at Dawn” with relish will be delighted with his account of the Sicilian and Italian campaign. All the same ingredients are here, from sharp one-liners (“Camaraderie and good fun,” he says of the resumption of negotiations at the Trident conference in Washington, “promptly popped like soap bubbles”) to brilliantly observed character portraits.

Take, for example, his description of Dwight Eisenhower on the eve of the Sicily landings, chain-smoking damp cigarettes in the sticky, humid underground command headquarters on Malta, desperately trying to pass time after sending the invasion fleet into the Mediterranean in potentially catastrophic stormy conditions. The minutiae of events combined with telling character observation enables Atkinson to write about Eisenhower — and others, like Generals Patton, Clark and Truscott — in a way that makes readers feel they knew these men personally. 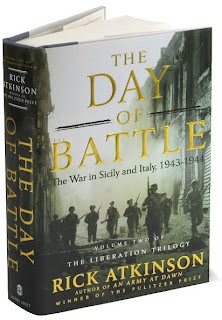 THE DAY OF BATTLE
The War in Sicily and Italy, 1943-1944. Volume Two of the Liberation Trilogy.
By Rick Atkinson.
Illustrated. 791 pp. Henry Holt & Company. $35.
http://www.anarmyatdawn.com/index.htm

Opening with a fine account of the Trident conference between Roosevelt, Churchill and their chiefs of staff, Atkinson notes that the Italian campaign was really all about Allied strategy, or rather diverging views on strategy between America and Britain. The United States believed nothing should hinder its original aim of invading northwest Europe at the earliest possible date. Britain felt just as strongly that Italy should also be invaded after a successful conquest of Sicily.

A compromise of sorts was achieved. Following Sicily, Eisenhower, as supreme commander in the Mediterranean, was to plan whatever operation was most likely to knock Italy out of the war and contain the maximum number of German forces.This, the Americans eventually conceded, was the invasion of Italy, even though Italian surrender terms had been agreed before the British crossed into the boot of the peninsula. Inevitably, problems soon materialized. The terrain hugely favored the defender, Hitler decided to fight for every yard north of Naples, the winter conditions were far harsher than anyone had anticipated and the Americans’ hearts were not really in the invasion anyway.

As in any war where miscalculations have been made at the top, it is the frontline troops and unfortunate civilians in the way who suffer the most, and Atkinson has an admirable sympathy and understanding of both. Among the most powerful passages in the book are his descriptions of the hellhole that Naples became and the desperate fight for San Pietro. The sounds, smells, violence and idiocy of war are all here. “Perhaps only a battlefield before the battle is quieter than the same field after the shooting stops,” he writes of the aftermath of the Salerno landings. “The former is silent with anticipation, the latter with a pure absence of noise.”

With these descriptions of the dirty business of war on the ground, along with his accounts of matters of higher politics and strategy, Atkinson is at his best. Although he is perhaps overly hard on General Alexander, he is, for the most part, evenhanded in his treatment of the senior Allied commanders, whose characters and decisions take up so much of the book. Clark, for example, receives a justifiably more generous assessment than has often been the case.

Yet, while Atkinson discusses all the big debating points — the Rapido crossing, Anzio, Cassino, Rome and so on — he tends to do so in terms of generals blaming one another for the various setbacks. There is not enough analysis of the issues and circumstances dictating those often difficult command decisions. For instance, a fuller explanation of how and why the terrain was so treacherous for the attacker would have been useful. The shortage of shipping — which meant the Allies could not take advantage of Italy’s one redeeming feature, namely its 5,000-mile coastline — was not Alexander’s or Clark’s fault. The other big problem facing Alexander and his generals in the early months in Italy was the slow buildup of troops and matériel. This was caused primarily by American insistence that formation of the 15th Air Force in Italy take priority over troops on the ground, thus using up much of the limited transport available. In fact, one of the prime reasons the American chiefs were finally persuaded to support the invasion of Italy was the promise of airfields from which the strategic bombing of Germany and the German war effort could be increased.

All Allied men and matériel had to cross the sea; the Germans, on the other hand, were already in place and could supply the front by land, hence with greater speed. Not until May 1944 did Alexander have the three-to-one advantage in troops he felt he needed for victory. These factors are not really examined. Indeed, the enormous contribution of the Allied air forces is greatly underplayed.

This leads to a further concern. There were, for the most part, fractionally more British frontline troops than American ones in both Sicily and Southern Italy. For example, four British divisions and three brigades landed on Sicily compared with just three United States divisions, while at the start of the final battle for Rome in May 1944, British troops numbered 253,859, and American 231,306. Yet, this book is unashamedly a celebration of the American experience in these campaigns, not that of the Allies as a whole. And since Atkinson has a formidable and well-deserved reputation, most readers will believe his interpretation of events. He should have made his almost total focus on the United States Army clear from the outset, especially as “The Day of Battle” is part of such a grandly titled trilogy. “The American Army and the War in Sicily and Italy” would have been a more appropriate subtitle for this book. It is also questionable whether, in the 21st century and with the current troubles in Iraq and elsewhere, continuing to view history almost entirely through the prism of the United States is serving Americans well.

Despite these quibbles, there are few to match Atkinson’s writing style. “The Day of Battle” is a very fine book indeed. “Here the dreamless dead would lie,” Atkinson writes in a very moving passage about the aftermath of the bloody Rapido, “leached to bone by the passing seasons, and waiting, as all the dead would wait, for doomsday’s horn.” Even the great Ernie Pyle would have liked to have written that one.

James Holland is the author of “Together We Stand: America, Britain and the Forging of an Alliance.”
Posted by jtf at 9:18 AM