Death of an Olympian 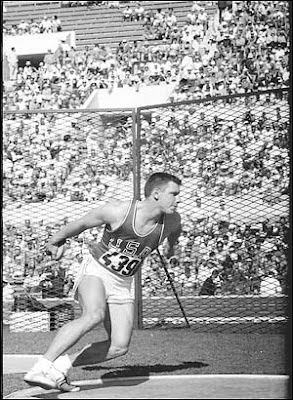 WASHINGTON -- The death this week of Al Oerter, four-time Olympic gold medalist in the discus event, prompts some thoughts on the great generation of field-event athletes that is now passing. Oerter is the only Olympian to win four gold medals in his event (1956, 1960, 1964 and 1968) with an Olympic record every time.

Sprinter and long jumper Carl Lewis won golds in four straight Olympics, but he did not set Olympic records in each win. And Lewis, though one of the greatest athletes of his era, competed in a different era, an era after the Olympic ideal of amateur sport had been maculated by professional sports contracts.

In Oerter's day, there was no money in amateur sport, but there were plenty of great athletes and, not coincidentally, great characters. Another who passed away a few months back was shot-putter Parry O'Brien, winner of two consecutive Olympic golds and, in his third attempt in 1960, a bronze. In 1964, O'Brien finished fourth. Both of these athletes were innovators in their events and legendary competitors, without displaying the guff we often see today. They were also lifelong athletes who exemplified the athlete's highest ideals: character, competitiveness and health. On this last point, Oerter's experience might not be totally convincing. He died at 71, but it was after overcoming a life of high blood pressure and cardiovascular problems. He also was afflicted often with injuries in competition, injuries that he usually overcame, often heroically.

His first two golds were the easy product of a prodigiously gifted young athlete, but in 1964 and 1968, his feats amazed. Both times he was injured, and in 1964, the injuries were appalling. Six days before his event, the 6-foot-4-inch athlete, who weighed nearly 300 pounds, had fallen on wet pavement and torn rib cartilage on his throwing side while also damaging his neck. Team doctors advised him not to compete and to lay off it for six weeks. His response was, "These are the Olympics. You die before you quit." Calculating that he could only throw in five of the allowed six efforts, he let fly with a tremendous heave on his last effort, sending the discus far enough to beat his great Czech rival, Ludvik Danek. By the time Oerter's discus landed, he was convulsed in agony.

Harold Connolly, another Olympic gold medalist from Oerter's era -- Connolly was a hammer thrower -- esteemed Oerter "the greatest field-event athlete of the century. There's a magic about him when he's competing. He's nervous before the meet. He doesn't eat well and his hands shake. But once the event is about to start, a calmness settles over him. The other athletes see it, and it intimidates them. They watch him, and they are afraid of what he might do." Well, whatever he did, it always would be by the book. He competed until 1987, after reaching the finals of the Olympic trials in 1984 at the age of 47. When he quit, he observed, "The drug culture had taken over."

I suspect the "drug culture" is a concomitant of the big money that has been injected into sports at the highest level today. The Olympic ideal of amateurism is long dead. With its passing has gone the love of sport for its own sake, the sheer fun of competition. After visiting an Olympic training facility in the 1990s, Oerter rendered his judgment of the professionalism that has subverted the amateurism of his day. According to The New York Times, he lamented, "I saw these athletes in their 30s training full time. … That's their life. What happened to the rest of it? I'm happy that I had a normal life, with a career and family. That makes a person whole."

The pure amateurism of the Olympics was a 19th-century liberal ideal. I always have wondered how the liberals could allow this ideal to fall victim to the mercenary impulse. It was one of the ideals they got right, and I have not heard a peep of protest from them as the giant corporations and the superpatriots subverted that ideal. Well, here I stand waving the banner of amateurism. Why is a modern Eleanor Roosevelt or Bertrand Russell not standing here with me? Is it because -- as I have been saying for years -- modern liberalism no longer produces such liberal paragons, just hustlers and the Clintons?


R. Emmett Tyrrell Jr. is founder and editor in chief of The American Spectator and co-author of Madame Hillary: The Dark Road to the White House.
Posted by jtf at 3:43 PM