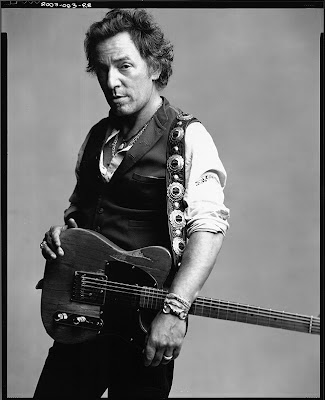 "Show a little faith/There's magic in the night," Bruce Springsteen sang on 1975's "Thunder Road." And for keeping the faith along the decades of back roads and stylistic detours, fans get their beautiful reward with Magic, his best record since The River in 1980. If such devotees assumed that the new album's title was a nod to rekindling the tattered romanticism of his salad days, they wouldn't be wrong. Magic marks only the second instance in more than two decades that Springsteen has made a studio CD with the E Street Band — and unlike the last reunion, he's not resisting their signature sound. Synths get a breather so Roy Bittan can return to those classic piano arpeggios; stirring key changes are again signaled by Clarence Clemons' sax solos; arena-friendly sing-alongs arrive in quick succession. If you were raised on this stuff, you may experience the giddy sensation that the world has been set aright again.

So why is Springsteen looking so damned surly on the cover? You didn't really expect a guy who devoted his recent career to sober fare like Devils & Dust to completely recalibrate his political serotonin levels, did you? In the tradition of Born in the U.S.A., the celebrative group spirit is also a buffer for his dark materials. Springsteen's sour expression is merely the first hint that his CD's simplistic name is actually a double entendre. When the spooky title track finally arrives, he's playing the part of an enigmatic illusionist who seems a little too eager to "cut you in half, while you're smilin' ear to ear." It turns out Springsteen was also thinking of magic in the sense of smoke and mirrors, as favored by snake-oil salesmen and senators alike. You don't need a semiotics degree to guess that he's getting allegorical about leaders using the War on Terror to pull off some sleight of hand. That becomes clear in songs such as the soldiers' elegy "Gypsy Biker", which includes asides like "The speculators made their money on the blood you shed." Note to self: World not set aright after all, despite reassuring Danny Federici organ fills.

There is no trickery, however, to the naturalness of the band vibe here. On 2002's emotional but musically uneven The Rising, you could sense everyone straining with producer Brendan O'Brien to figure out how to bring the E Street Band into the 21st century — then finally arriving at what felt like a Springsteen "solo" album that happened to graft in the old gang. But Magic, also produced by O'Brien, gets it right from the start by mostly ditching recent rootsy flavorings for a compressed wall of sound. Sometimes that wall is gorgeously Spectorian, as with the glockenspiel-and-timpani-adorned pop stunners "Girls in Their Summer Clothes" and "Your Own Worst Enemy", which Springsteen delivers in a tender, rasp-free register barely heard since "Born to Run". Sometimes it's a garage wall, as on "Radio Nowhere", which gives axman (and ex- Sopranos hitman) Little Steven a cranky guitar blowout to play, unapologetically, on his garage-rock radio show.

If there's another "Glory Days" here — an inevitable concert standby that Bon Jovi will spend the next decade trying to rip off — it's "Livin' in the Future", an insanely jubilant celebration of denial as a coping mechanism. "None of this has happened yet", the gleeful choruses insist as Clemons wails on his horn and everyone joins in a "na-na-na-na-na" cheer. This, despite almost apocalyptic verses about how the singer's "faith's been torn asunder" by both his girl and his country. That's one of many Magic passages where it's intriguingly, purposely unclear whether Springsteen is describing wartime malaise and social dystopia or simply a bust-up between lovers.

No album could say more about the uncertain national mood of 2007, though that's only part of the set design. Springsteen's topical allusions are unspecific enough that Magic will remain enchanting after we get these American messes straightened out, in 5, 10, 50 years. Still, he does finally bring the war to the fore in the climactic "Devil's Arcade", and an album that began with Bruce yelling "Is there anybody alive out there?" ends on real matters of life and death. This big, slow-building ballad finds a young woman visiting her beloved in a military hospital, whispering promises of an idyllic suburban future and finally repeating the line "the beat of your heart" over and over, as if that very incantation could keep him tethered to the corporeal world. It's a moment that will break even a hardened rock fan's heart. But by then your resolve might already be melting from the realization that, three and a half decades into his career, Bruce Springsteen is back in the masterpiece business.
Posted by jtf at 6:21 AM