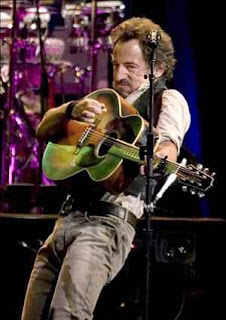 A new album by Bruce Springsteen and the E Street Band always qualifies as an event, but one as great as "Magic" is nothing short of a gift. Springsteen sometimes seems intent on reinventing himself, taking pains not to be typecast, almost as if he has avoided making Springsteen-sounding records just because that's what is expected of him. The immense joy of the 11-song "Magic" comes from just the opposite - he practically revels in the Springsteen-ness of it all: the squawking saxophone rising inexorably out of the dense, charging instrumentals; his slurred howling shooting the curl of the band's tidal wave of sound; the Dylanesque metaphors and heart-tugging punch lines. On an album that recalls "The River," the sprawling 1980 two-record set on which he polished his pop sensibilities and perfected the trademark style he had introduced so definitively with "Born to Run," Springsteen mashes together whooping vocals, clanging guitars and pounding drums into a joyous, pulsing mulch. The layered production gives off sparks, and Springsteen tries new things with his voice. What a pleasure it is to bathe in the sheer exultant sounds of towers of song such as "Livin' in the Future," "You'll Be Coming Down" or the lead track, "Radio Nowhere," with its surprising echoes of the Clash. "Your Own Worst Enemy" reverberates with the vocal harmonies and orchestrations of Brian Wilson and "Pet Sounds." "Girls in Their Summer Clothes" sounds like a lost 45 from the '60s. And nobody can hear "Last to Die" without thinking about the war in Iraq. It's a wrenching, drenching, propulsive, explosive outing for the Boss and the boys, long overdue but not a minute too late.

This article appeared on page N - 50 of the San Francisco Chronicle
Posted by jtf at 6:40 PM