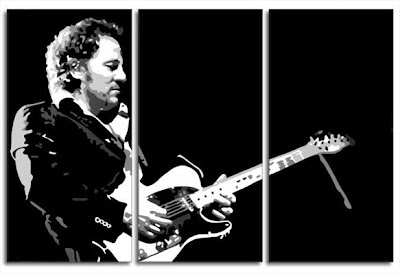 
Bruce Springsteen has one of the fiercest cadres — okay, let’s call it a cult — of enthusiasts of any baby boomer icon. That should be the case. For thirty-five years he’s been burning down the road of rock stardom and unlike every one of his contemporaries, with the possible exception of Neil Young, he’s avoided burnout and remains as relevant as ever.

But that fervent following also produces a myopic kind of tunnel vision - call it Bruceopia. While there are obvious exceptions, this manifests collectively in refusing to accept anything that doesn’t immediately recall the glory years of Springsteen’s pre-Born in the USA as sub-standard in his catalog.Those who feel everything Springsteen’s done since 1984 is crap have missed a great deal of triumphant music; anyone who missed his Seeger Sessions tour (and there were many; while European venues sold-out, many U.S. venues reported dismal sales) because he wasn’t backed by the E Street Band and because he was doing mostly covers, missed one of the great live concerts of our time.

But there seems to be a near unanimity among the Springsteen faithful — and we’ll include all those middle-aged codgers who cover rock music for mainstream publications — that Magic, Springsteen’s first record with the E Streeters since 2002, marks a return to the rock and roll roots of both the Boss and his trusted cohorts. It's difficult to find a negative review of this record (All Music gives it three out of five stars, mostly because it sounds like a collection of songs rather than a unified whole).

On Monday, the day before its release on CD, Newsday reported that not only is it Springsteen’s most accessible album, but that the more pressing concerns of Springsteen’s most recent albums have been aside for “more leisurely pursuits.”

While I count myself firmly within the cult of Springsteen, and love the sound of Magic, a deeper listen shows that while it may echo the sound of some of Springsteen’s greatest albums, this is anything but a tuneful walk down memory lane.

The music is undeniably a throwback, with Springsteen’s best harp since The River, the best Clarence sax solos since Darkness, and maybe the band’s crunchiest rhythm guitars ever. It’s almost like Springsteen has finally realized he’s got two of the best guitarists in the world in his band and it’s finally time to let them loose.

But Springsteen’s great albums from his early period, and greatest songs since his step into mature songwriting with Tunnel of Love, though often containing darkly introspective passages of doubt and even fear, were nearly always imbued with a sense of blazing optimism, faith, and even joy. They carried an unshakable sense that all the struggling and longing would pay off for those committed to their own course, regardless of the cost.

That’s nowhere to be found on Magic. Absent are the anthems of finding freedom by the dashboard light or parties in the streets or redemption through rock and roll, or finding faith and hope in the machinery of the American night. Even the one certifiable Springsteen classic on the record, "Livin’ in the Future," which sounds as good as a contemporary "Tenth Avenue Freezeout" as anything he’s done since, seems like an excuse to party hearty. But the intentionally absurd chorus, “We’re living in the future and none of this has happened yet,” undercuts anyone who thinks this is really a celebratory piece of music.

There’s a throbbing moodiness to the piece that serves as an ironic counterpoint to some of the punchier music. There is plenty of imagery of crushed metal flying machines, flags waving and drifting, bloody suns setting in flames, gunpowder skies, cities burning, saw-blades cutting smiling faces in two, silent radios, and empty highways, tyrants and kings strung up at city gates. Even the Catholic iconography that Springsteen has flirted with on his few past records as a corollary to the hope of salvation that his characters used to find on the road, or in rock and roll, or in the electric pulse of a downtown street, is tinged in darkness:


Well tears, they fill the rosary at your feet, my temple of bones
Here in this perdition we go on and on
Now our city of peace has crumbled, our book of faith's been tossed
And I'm just down here searchin' for my own piece of the cross
In the late afternoon sun fills the room with the mist in the garden before the fall
I watch your hands smooth the front of your blouse and seven drops of blood fall.


What about that constant staple of Springsteen's - the bouncy, peppy romantic odes to finding hope in the promise of a new love? Well, there’s “The Girls in their Summer Clothes,” which sounds like a vintage Springsteen tune, seeming to promise that in their smiles and in their arms, the character will find everything he needs, even for at least one night. But the last line of the chorus indicates something different:


Well the streetlights shine
Down on Blessing Avenue
Lovers they walk by
Holding hands two by two
A breeze crosses the porch
Bicycle spokes spin 'round
Jacket's on, I'm out the door
Tonight I'm gonna burn this town down


The answer apparently isn’t even there, any longer. One of the bounciest tunes, "I’ll Work For Your Love," also sounds like a something out of Springsteen's bag of musical tricks: an homage to a working stiff who is determined to prove worthy of his girl's love. But it’s far darker than the sound implies:


The key song supporting the moody and troubled subtext of Magic, is the next to last listed song, “Long Walk Home.” The beginning is filled with all that aw-shucks imagery that Springsteen has long studded his songs with: a small hometown’s sleepy streets, deep greens of summer, Sal’s grocery, the barbershop on South Street. As the character walks through town he seems to know it as a place where “everybody has a neighbor /everybody has a friend /Everybody has a reason to begin again.”

Then his father tells him,


Son, we're lucky in this town,
It's a beautiful place to be born.
It just wraps its arms around you,
Nobody crowds you and nobody goes it alone
You know that flag flying over the courthouse
Means certain things are set in stone
Who we are, what we'll do and what we won't.


But the song is anything but an ode to long-ago American small-town values, but more about a man who has returned to his town and found nothing but blank faces and shuttered windows and empty homilies. As much as he’d like to believe his father’s words have some ring of truth, the chorus repeated over and over at the end is it’s going to be a long walk home. Even though he is home.

If it sounds like a rehash of “My Hometown,” you’re flat wrong. In that song, just as on the entire Born in the USA album, there was an underlying current of anger at what President Ronald Reagan’s America had done to the country’s heart. In this song, there’s just resignation and undeniable sadness. That heart is now broken and, for the first time, there’s little hope that it’ll ever mend.

So what Springsteen’s done with Magic is blended the sound of a 25-year-old man trying to set the world ablaze with his passion for rock and roll, with the lyrics of a nearly 60-year-old man who knows that life is far more complicated and murky. No longer does the road or the journey point to something grand or redemptive. The past offers no comfort; the future is filled with bloody skies, ghosts, and bodies hanging from trees, and the wise men have all been exposed as fools.

It’s the work of a man whose faith in his country and his own self-created myth is, if not broken, certainly bent. It’s a splendid blend of young and later Springsteen and while there’s a part of me that almost wishes there was some stab at one of those embarrassingly prosaic Bruce anthems, it’s uncomfortably hard to argue with his pretty grim assessment, as found in one of his most direct anti-war passages (and there are plenty of other direct and indirect ones, as well) which blows the hell out of Springsteen’s most enduring myth: the promise of freedom offered by the open road:


Jo Boo! is the non-paid nom de guerre of Joel Beers, a theater critic with OC Weekly for the past decade, and a newspaper reporter and free-lance writer . for even longer. Sometimes he even writes things for the stage. For more rants, check out www.ocweekly.com; http://blog.myspace.com/joelbeers
Posted by jtf at 6:45 AM