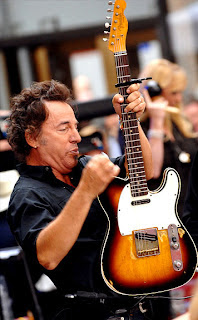 "How much did they have to pay you to come out this early?" Springsteen asked fans who cheered during a full-scale rehearsal at 6 a.m.

"Thanks for being so lively at this hour in the morning," Springsteen said.

With fans perched on balconies 10 stories up, gathered along several blocks and peering from neighboring buildings, Springsteen and the E Street Band performed seven songs; some new, some old. The fans sang nearly every word.

"It was awesome. He's so intense," said Vincenza Corcoran, of Peekskill. "It's Bruce."

"It's probably the closest I've ever seen him, that's what made me want to come," said Linda Manzi, of Douglaston.

Manzi said she took a day off work just to be in Rockefeller Plaza for the show.

"It's great," she said. "It's unbelievable he was even here." 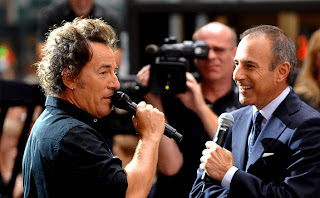 To accommodate the overflow crowd, which stretched down parts of 48th and 49th Sts. and into Rockefeller Center, producers installed a huge video screen near the ice rink.

"This is the same crowd you get for the dancing bears," Springsteen joked with Matt Lauer. "I appreciate it."

Noelle Iturbe, there with her husband Iker, held a sign that read: "Your biggest fan, all the way from Spain, married to a Jersey girl."

Others shouted "We love you, Bruce!" And even more simply yelled "Bruuuuucce!"

Springsteen was on to get traction for his latest CD, "Magic," which hits stores Tuesday. It was the second time the New Jersey native used the top-rated morning show as a platform to showcase a new collection, having done so for the 2002 release of "The Rising."

"We have but only one Boss today," said a guy named John who refused to give his last name because he called in sick back in Pennsylvania.

The band appeared on stage a few times throughout the four-hour telecast, starting at 8 a.m. with "Promised Land." They also sang the new songs "Radio Nowhere," "Last to Die," "Long Walk Home" as well as the classics "My Hometown" and "Night."

Before singing "Living in the Future," Springsteen said the song was about "The things we love about America - cheeseburgers, French fries, the Yankees battling Boston...the Bill of Rights, trans fat and the Jersey Shore."

He also said it was about the Iraq war, and issues such as illegal wiretapping.

Between songs, and off-air, Springsteen told an off-color joke and gave a nod to a guy sitting alone in a window.

"I must really want to sell some records bad to be up this early," Springsteen joked. "It's desperate."