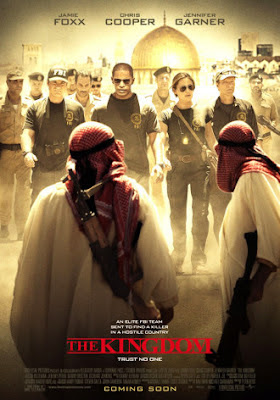 An unlikely combination of thrilling and thoughtful.

The Kingdom kicks off with a scene of tranquility that is quickly and horrifically interrupted by an act of unspeakable terror, and then spends the rest of its running time dealing with the consequences. At the living quarters of American oil workers in Riyadh, Saudi Arabia, a softball game turns into a bloody, explosive massacre, one that’s quickly compounded when another bomb goes off after first responders hit the scene. The sequence whips by in a frenetic, gut-tightening frenzy, swift and brutal, and it serves as an announcement of the film’s central premise and question: Islamic terrorism is a genuine, serious threat — now what’s to be done about it?

The man behind the film, Peter Berg, might seem an unlikely inquisitor. He is, after all, the director responsible for the mostly enjoyable but entirely trivial Sean William Scott/The Rock actioner, The Rundown. But there’s little that’s trivial about the tone of his latest, a riveting cross between feisty geopolitical thriller and run-and-gun, terrorism-based action flick that makes a strong, mostly serious effort to explore the perils and problems, both at home and abroad, of combating overseas terror. In spite of a lively, surprisingly witty script, The Kingdom doesn’t kid, delivering that rare Hollywood entity: a film that is (almost) equal parts thrilling and thoughtful. In fact, its only major weakness is its inability to commit to one or the other. In many respects, Berg has simply made a classic squad-based action film along the lines of Aliens or The Magnificent Seven.

Despite the film’s gritty, almost realistic tone, the team contains the usual assortment of action-film archetypes. Foxx plays Fluery as aggressive, coolly macho, and effortlessly competent. He is, in other words, a (slightly) tempered-for-reality version of the bad-to-the-bone action hero. Cooper delivers a typically rascally turn as a grinning, scraggle-toothed explosives tech — the wise-but-weird old sage — while Garner makes the most of an underwritten tough-chick role. The real standout is Bateman, whose snarky, put-upon computer geek, manages, against the odds, not to be a cliché and generally keeps the film from becoming too serious for its own good. None of them qualify as characters of real depth, but each is sketched quickly and effectively.

After the double-bombing setup sets the pace, the rest of the film comes in three distinct but equally engaging parts. Each details a different set of difficulties in responding to a terrorist attack. For the first hour, Fluery and his crew attempt to navigate both stateside bureaucratic hurdles, and various Saudi strictures, in hopes of actually being allowed to investigate the case. Eventually, they get to the Middle East, win over their Saudi hosts, and begin the process of combing the bombsite in order to decipher what went down and who might be responsible. For about forty minutes in the middle, the movie plays like an episode of CSI: Riyadh, cutting back and forth between the team members as each turns up scraps of evidence. And then there’s a riveting, shoot-’em-up finale, in which the hardware comes out and the bullets start to fly.

While trying to get permission to head overseas start a formal investigation, Fluery’s team runs into an array of institutional barriers. The Department of Justice worries that more boots on the ground will simply provoke further action (resulting in the pleasingly dry riposte that, “not to go after criminals because they might harm you is not a policy of the FBI.”). Nor is the State Department keen on the idea of an American presence on the scene. Everyone prefers milquetoast statements to real commitments, leaving fighters like Fluery to drift in a sea of Brooks Brothers-clad complacency.

Berg rather convincingly casts Washington as a thicket of smug bureaucracy so mired in CYA buck-passing and petty self-promotion that it is almost completely ineffectual. For a little while at the beginning, The Kingdom threatens to become a great movie about maneuvering in the nation’s capital. Back channel communications (Fluery uses a Washington Post reporter to force a meeting with a Saudi ambassador), turf wars, and power struggles abound. No one wants to take serious action, because no one wants to be held responsible for failure. Only the hard-charging FBI comes out unscathed, and that’s more a function of cinematic necessity (there’s got to be a hero somewhere), than sympathy for the agency. Otherwise, Berg is deeply cynical about the city’s commitment to anything but mealy-mouthed self-promotion.

Saudi Arabia, of course, proves similarly difficult, but in different ways. On the way over, Cooper says that the country is “like Mars,” and when they get there, all manner of cultural conflicts inevitably arise. The team faces distrust, restricted movement, and generalized hostility; even the families of the American victims don’t want to work with them. Yet, if anything, the film underplays the cultural differences, only barely engaging, for example, the issue of how the country would react to a female FBI agent examining Muslim bodies.

Berg films the proceedings with a calm ferocity: Like its heroes, the film moves quickly and decisively, understating things whenever possible, despite perpetual tension. When the action kicks in, though — especially during final twenty minutes — it’s a gritty, slam-bang rush. Berg’s gun-filled sequences bear the distinct fingerprints of director Michael Mann (who served as a producer on the film), taking obvious cues from the artful, high-intensity shoot-outs Mann made his signature in films like Miami Vice and Collateral. Instead of relying on the easy spectacle of, say, the Die Hard series or Transformers, which treat action scenes like frivolous fireworks displays, Berg works the nerves. Anxiety is at the forefront here — he wants you to know this isn’t just a ride.

The film’s action is deftly handled, but, somewhat frustratingly, it comes at the expense of the bigger picture, leaving many of the film’s initial questions unanswered. There’s a tension inherently embedded in any film like this: Which is more important, action or ideas? Berg gives ideas a healthy amount of play — most of the film is sharp, terse talk — but in the end, at least in Hollywood, the gun is mightier than the word.

That’s not to say, however, that the violence comes without a sting. Midway through the film, the Saudi Colonel says that when the perpetrators are caught, “I don’t care to ask even one question. I want to kill them,” and Berg has no problem indulging this sentiment. By the time the film ends, there are scads of dead terrorists, and no apologies are made for the thrills provided by taking them out. But Berg, to his credit, doesn’t merely dish out cinematic justice and call it a day. Instead, his film suggests that killing terrorists, while no doubt satisfying — and indeed, the right thing to do — offers plenty of temporary gratification but doesn’t address, and may even exacerbate, the root problems. In The Kingdom, even justified vengeance is no solution.

—Peter Suderman is associate editor of Doublethink. He blogs at theamericanscene.com.

Email ThisBlogThis!Share to TwitterShare to FacebookShare to Pinterest
Labels: Film Reviews and Features, Islam and Terrorism