Mona Charen: Why is Clarence Thomas So Angry? 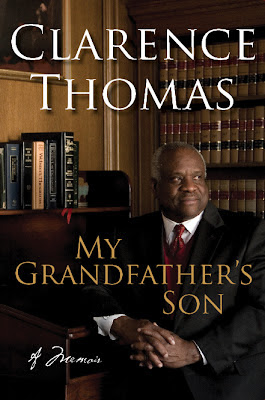 National Public Radio was one of the first out of the box greeting Clarence Thomas's memoir, My Grandfather's Son. Nina Totenberg acknowledged that it was, "in some ways a beautifully written book" but went on to declare it "a book of complete bitterness and rage." The Washington Post's front page announced that Thomas had "settled scores" in his "angry" book. And Washington Post columnist (as well as Charen pal) Ruth Marcus writes of Thomas's "blast furnace" anger.

Imagine that. He hasn't gotten over it. Totenberg, for those who may have forgotten, was the journalist who first reported that Anita Hill had made allegations against Thomas (though at the time, Hill had not agreed to go public). And she was a prominent Hill enthusiast during the contretemps.

Totenberg affects surprise that Thomas is angry? It would require a masochist not to be angry. Imagine that your spotless reputation had been thoroughly trashed before a worldwide audience. Imagine further that everything you had attempted to accomplish in your career was undermined in two weeks by ideological opponents ready to do anything to keep someone with your heterodox views down. It is my experience that people often become enraged when they read even small inaccuracies about themselves in the newspapers. Contemplate enduring a campaign of vilification. How many years is it supposed to take to get over something like that? Is Bill Clinton over the Monica Lewinsky thing?

Actually, speaking of President Clinton, the brouhaha over Thomas and what he did or did not say to Hill now seems almost quaint in retrospect. Even if we assume (and I do not) that the worst of Hill's allegations were true, they do not stack up to the kind of brutish behavior attributed to Bill Clinton by Paula Jones, Monica Lewinsky, Kathleen Willey and Juanita Broaddrick. But the very same people who adjudged Thomas one of the lowest creatures on Earth, found Clinton's behavior a private matter of no consequence with no public implications.

Of course, while there is anger in the book -- justifiable anger, one might argue -- there is also tenderness, vulnerability, brutal honesty and overflowing gratitude. None of the major reactions to the book seem to have noticed those things. There is also unswerving intellectual integrity. A small example among many: In law school, Justice Thomas relates, "I was uncomfortably aware that blacks failed to pass the bar exams at a much higher rate than whites, and that the NAACP Legal Defense Fund had filed lawsuits alleging that the exams they took were racially discriminatory. . . . At first I assumed that the disproportionate black failure rate was conclusive evidence of racial discrimination, but the more closely I looked at the facts the more apparent it became that I was wrong. At that time each question on the bar exam was graded separately by a difference scorer and each completed exam identified solely by number, thus making it impossible for the graders to tell which examinees, if any, were black." Thomas concluded that the poor education many blacks received was the culprit, but by differing from the conventional wisdom he was already on the road to heresy.

Justice Thomas has continued that apostasy on the Supreme Court, courageously and brilliantly arguing his philosophy in one magnificent opinion after another. Jan Crawford Greenburg, longtime Supreme Court reporter for the Chicago Tribune, now with ABC, dismisses in her recent book the claim that Thomas is some sort of cipher on the Court (a view held only by the abysmally ignorant). "An extensive documentary record shows," she writes, "that Justice Thomas has been a significant force in shaping the direction and decisions of the court for the past 15 years." No one who has read his opinions could fail to appreciate that.

Finally, no one who has had the pleasure of meeting Clarence Thomas would recognize him from the public descriptions that have greeted this book. His legendary laugh is sonorous and infectious. His manner is dignified yet approachable. Those who know him are aware of his passionate efforts to help other blacks -- and of his equally passionate refusal to advertise this. The Anita Hill business is a tiny part of this man's story -- a story that makes for very rewarding reading.