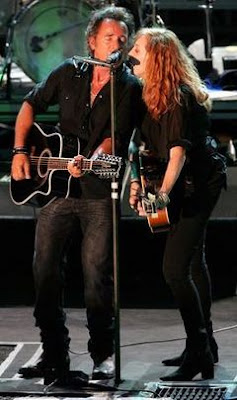 On his new album with the E Street Band, “Magic” (Columbia), due out Tuesday, Bruce Springsteen gets down to business behind a small army of overdriven guitars.

“This is radio nowhere/Is there anybody alive out there?”

“Radio Nowhere” qualifies as a near-parody of Springsteen-speak with its references to “the last long American night” and “driving thru the misty rain … searching for a mystery train.” But it’s also a reaffirmation that Springsteen and the E Street Band are still a pretty good rock band when they want to be. Everything feels just a little rushed, breathless; even saxophonist Clarence Clemons, who essentially plays the same solo every time, keeps his contribution quick and dirty.

“Radio Nowhere” shares a chord progression with Tommy Tutone’s 1982 hit "867-5309/Jenny." But it also sets the tone for an album that sounds every bit as disillusioned as Springsteen’s “Darkness on the Edge of Town” did in 1978. Its characters feel disconnected from home, family, country, themselves. They wonder what they’ve become, and why. “Magic” doesn’t resort to war-is-bad administration-bashing. It’s a protest album that evokes rather than preaches.

Central to its tone is that Springsteen and the E Street Band lean into the songs with no-nonsense vigor. It’s about time. The singer and the E Streeters have been an off-and-on proposition for two decades. They part ways, get back together and cash in big-time on the road (a forthcoming tour includes two shows Oct. 21-22 at the United Center). But their prime currency has been nostalgia. They haven’t made a great album together in 23 years. The 2002 Springsteen-E Street reunion album, “The Rising,” embraced Celtic music, gospel and country, and felt soft.

On “Magic,” the Brendan O’Brien production is still big and polished, but it’s not fussy. Saxophones, keyboards and strings mostly provide ornamentation. The focus is on Max Weinberg’s drums and the guitars of Springsteen, Steve Van Zandt and Nils Lofgren.

The bolder sound suits the subject matter. The songs are crowded with outcasts and walking wounded. “Gypsy Biker” oozes the menace of an Ennio Morricone Spaghetti Western soundtrack, with harmonica whining and guitar strings bending. “The Last to Die” ostensibly chronicles the flight of two desperados with a blood-pumping groove. But it turns on a question that directly addresses an interminable desert war: “Who will be the last to die for a mistake?”

“Long Walk Home” blasts a war veteran’s feeling of abandonment through the amplifiers. He returns to the town where he was born only to find the residents are “all rank strangers to me.” The values his father once imparted have vanished. “Devil’s Arcade” chronicles a slow, lonely decline in an inhospitable place, the string arrangement thick as desert sand.

The singer also puts a fresh spin on his love for classic rock and soul. “Your Own Worst Enemy” is the kind of string-swathed ballad that Ben E. King might’ve coveted. Except it’s a cold-sweat nightmare.

“Girls in their Summer Clothes” glories in Phil Spector/Beach Boys romanticism, but it seethes with frustration. When the narrator vows to “burn this town down,” it doesn’t sound like he’s born to run, but barging into the blackness with a case of lighter fluid.

Even more disquieting images pack the title song. “I’ll cut you in half while you’re smilin’ at me,” the magician declares. The song turns into a scene out of “War of the Worlds”: Citizens flee their homes, fire spreads, and “somebody’s hanging in the trees.”

Certain songs don’t just echo the past, they openly mimic it. “I’ll Work for Your Love” rejiggers the 1973 romantic declaration “For You.” And “Livin’ in the Future” swaggers like the second coming of the 1975 R&B rave-up “Tenth Avenue Freeze Out.” But the comforting sounds are often deceptive. Election day rolls around on the latter song, and a menacing stranger arrives with “the barrel of a pistol spinnin’ round.”

It makes for an album in which Springsteen and the E Street Band conjure the ghosts of their hardest-hitting music, 1975-1980. But the singer’s lyrics don’t look back. They are about right now, and a scary, uncertain future.

greg@gregkot.com
Posted by jtf at 6:56 PM