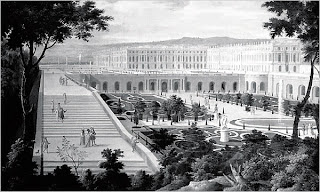 Photograph From Bridgeman Art Library/From “The Great Upheaval”
“The Orangery at Versailles,” by Pierre-Denis Martin.


In his previous and well-received book on the last month of the Civil War, “April 1865,” Jay Winik demonstrated a flair for storytelling that suggested an almost cinematic, you-are-there immediacy. He also embraced the old-fashioned idea that prominent personalities, most dramatically Robert E. Lee, actually shaped the course of history, reinforcing Emerson’s maxim that history is biography writ large. 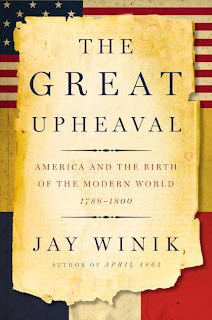 Both tendencies are on display in “The Great Upheaval,” but here the canvas is much larger. The time is the last decade of the 18th century. The place, or rather places, are the United States, France and Russia. The cast of characters is a veritable gallery of greats: all the founding fathers, with George Washington as the foundingest father of them all; Louis XVI, Marie Antoinette, Robespierre and Napoleon; Catherine the Great, Prince Potemkin and Thaddeus Kosciuszko. Cecil B. De Mille could not have asked for more.

There are two overlapping story lines at work here. The first might be called the big-bang theory of the modern political universe. Namely, in the late 18th century an enormous explosion of enlightened ideas about human equality, personal freedom and individual rights rocked the Western world, then radiated its energies out to undermine the hierarchical assumptions of the medieval order. This is hardly a novel argument; indeed it is a bedrock assumption of the liberal or Whig interpretation of the last two centuries of Western history.

Winik’s second story line, which advances a more unconventional claim, is that the revolutions in America and France, and the nonrevolution or reaction in Russia, were all of a piece, that they represented different enactments of the same overarching plot. It seems to me that Winik is on solid ground in the linkage between the American and French Revolutions. But the Russian connection seems somewhat strained. Catherine the Great’s decision to take Russia in an autocratic direction, to reject the enlightened impulse, was rooted in a realistic assessment of the extremely bloody consequences of the French Revolution. She recognized that the comparatively calm consequences of the American Revolution did not translate into a European context. She was right about that, and thereby bought another century for the Russian monarchy, but also assured that when the revolutionary moment arrived, it would be more violent and, ultimately, uncontrollable.

The logic of Winik’s argument about the interconnected character of revolutionary events raises a host of tantalizing questions: How did Americans manage to control the revolutionary energies and create the world’s first nation-size republic? Why did France implode in a spasm of gore and terror? How fateful was Russia’s rejection of the liberal agenda? But Winik’s deepest instinct is not to soar to panoramic altitudes but rather to dive into the details and recover a palpable sense of what it was like, for example, to watch Marie Antoinette go to the guillotine, or George Washington dominate a room by his silence.

Winik frequently pauses in his narrative to provide lengthy background pictures of the star players. Here, for example, is a typical passage from his profile of Louis XVI:

“His early childhood was nothing short of desolate. He was sickly, meek and pathologically shy. Ignored by his parents, who preferred his handsome older brother, and taunted by his own family as ‘Louis the Fat,’ he was orphaned at the age of 10 and was then haughtily ridiculed by his formidable grandfather. ... Physically, he walked with a waddle and was plump even as king, but he grew to be quite tall for his times — 5 feet 10; and he had soft blue eyes. ... His eyesight was bad, but his memory was superb. For that matter, so was his moral compass: modest and loyal, almost to a fault, he always esteemed the church, and, uncommon not just in a French king but in most kings, was ill at ease with his father’s many infidelities.”

Winik is a master of the character study, and although his book is based almost entirely on secondary sources, he has an uncanny knack for synthesizing the work of others, then imposing his own distinctive mark. I spent five years reading all of Washington’s papers, but could detect no gaffes or missteps in Winik’s rendering of the man.

But because personalities loom so large in his story, they sometimes seem to determine all the outcomes. Thus the American Revolution succeeded because of the preternatural wisdom of Washington. The French Revolution happened because of the chronic indecisiveness of Louis XVI. And Russia opted to oppose the liberal surge because of the enlightened realism of Catherine the Great.

What is missing from this narrative is the impersonal dimension, the geographic, demographic, socioeconomic differences between France and Russia on the one hand, and the United States on the other. Leadership did make a difference in securing the revolution in America. But the Americans could afford to be more patient because they did not face pent-up hatred like that of the French peasantry and Parisian poor. America also enjoyed splendid isolation from the cauldron of European politics. If it had been located in the middle of Europe, it would almost surely have suffered the tragic fate of Poland, regardless of the impressive leadership skills of Washington and the founding fathers. Indeed, one of Washington’s elemental insights was to recognize that history had dealt him cards that no European monarch could match.

My sense is that Winik is not oblivious to these deep-rooted differences between the American and European contexts. But as a born storyteller, he privileges the personal. If you want a comparative analysis of the revolutionary movements in America and Europe, you should look elsewhere. If you want to understand, intellectually and emotionally, what it was like to experience this historic upheaval, this is the book for you.

Joseph J. Ellis is the Ford Foundation professor at Mount Holyoke College and the author of the forthcoming “American Creation: Triumph and Tragedy at the American Founding.”
Posted by jtf at 9:10 AM