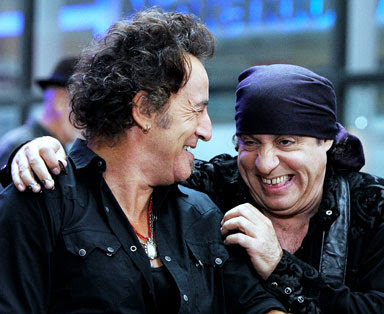 Bruce Springsteen isn't always known for working quickly, but he just may have another new album already in the can on the heels of "Magic," released earlier this week via Columbia.

"There's another group of songs that exist that I think are great songs and should end up somewhere, but they just didn't quite fit with this group," says producer Brendan O'Brien, who helmed "Magic" as well as 2002's "The Rising" and 2005's "Devils & Dust."

O'Brien declined to comment on murmurs that the new album could be out as soon as next spring, saying only, "I'll defer to others on that one."

What's clear is that O'Brien has played a key role in one of the most prolific period of album releases in Springsteen's storied career. Before "The Rising," the Boss hadn't made a new studio album in seven years, and hadn't recorded with the E Street Band in nearly 20.

"He had produced his own music with other people for a long time," O'Brien says. "If he was meeting with me, it meant he maybe wanted to try something new and inspired. He needed somebody to help him get over the hump."

In contrast to the somber, Sept. 11, 2001-themed "The Rising," the folk-leaning solo album "Devils & Dust" and last year's all-traditional "The Seeger Sessions," "Magic" offers some of the most melodic songs Springsteen has written in years. The material is tailor-made for the onstage power of the E Street Band, which has just begun a North American tour.

O'Brien credits Springsteen with allowing him to participate in the vetting process, which in turn shaped the mostly high-energy vibe of the new album.

"It was clear he wanted that kind of input, and I let him know right away that that's something I like to do and am helpful with," he says. "On this one, we met at his place and he sat down and played me a bunch of songs. I would be looking at the lyric book while he was singing them. He'd finish, we'd talk, and we'd make notes."

"As best I can tell, everyone else seems at peace with that," O'Brien says. "We'll bring Danny and Steve in, but by that point, I have a better idea as to what we need them for. It makes their overdubbing much more specific."
Posted by jtf at 4:24 PM