Springsteen hits the road: 'And so it begins!' 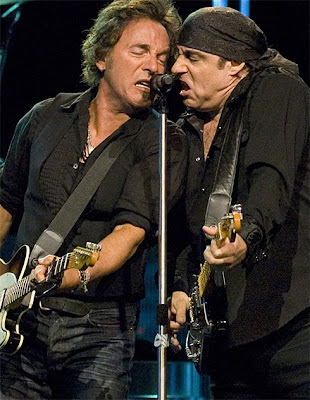 Springsteen's interplay with sideman Stevie Van Zandt was played down this time, but still part of the show.

But is time running out? And is there enough good magic left in the tank to get there?

The group grappled with those questions as it kicked off its first full-scale tour in five years here on Tuesday night with a sturdy and sobering 23-song revival that showcased the Magic CD, released earlier that day. By the time the two-hour, fifteen-minute workout ended, it was clear these blue-collar prophets still can cast a potent spell, but they've been tempered by the journey.

The Boss and his eight mates (joined by violinist/vocalist Soozie Tyrell), all clad in black, got right to work on the new material, opening with the CD's first cut and single, Radio Nowhere, a hard-driving lament about the vapidity of American culture.

"And so it begins!" Springsteen cried before the band launched into the uplifting 1980 anthem The Ties That Bind and renewed its covenant with the sold-out crowd of 16,000-plus fist-pumping souls. 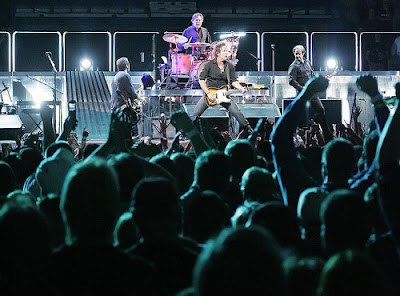 But he quickly steered back toward the bleak themes that would dominate the night: 9/11's aftermath (Lonesome Day), the Iraq war (the new and dynamically rendered Gypsy Biker), and distrust of authority (Magic, the chilling new title track he introduced via a reference to "the Orwellian nightmare … of the past six years"). Even the crowd-pleasing chestnuts —Night, She's the One, Darkness on the Edge of Town and the indestructible Born To Run— tended toward the desperate and defiant and away from the romantic. (So did the night's only dud, a wobbly duet between Springsteen and wife Patti Scialfa on Town Called Heartbreak from her recent solo album Play It As It Lays.)

Gone, or at least tamed, were Springsteen's jovial interplay with saxman Clarence Clemons and guitarist Stevie Van Zandt and the manic street-preacher exhortations that sometimes spiced the between-song patter on previous tours. Instead, a mostly somber and sometimes grim Bruce — his image on the video screen during the new smoldering Devil's Arcade was lit with a sinister red glow — let his searing guitar and lyrics speak for him.

The E Streeters, powered by drummer Max Weinberg and the guitars of Van Zandt, Nils Lofgren and bassist Garry Tallent, handled the eight new songs from Magic superbly, giving them a harder edge than on the more pop-sounding CD. And at least three of them, Gypsy Biker, Last to Die and Long Walk Home, seem destined for a permanent place in the canon. The latter two were sandwiched between The Rising and Badlands in a powerhouse finale that retraced the themes of resiliency, betrayal, alienation and defiance.

To soften the ride home the group finally showed its sweeter (though still bittersweet) side during the encores with the charming new Girls in Their Summer Clothes, a gum-smacking revival of Thundercrack and the plaintive sing-along Waitin' On a Sunny Day. 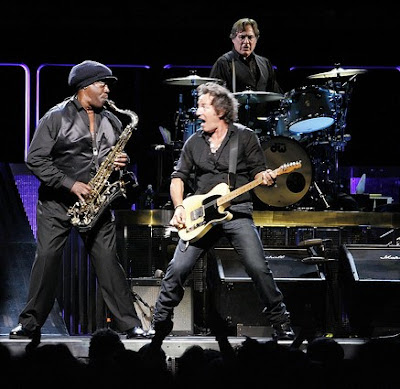