Mark Steyn: Taking of hostages by Iran is not Britain's finest hour 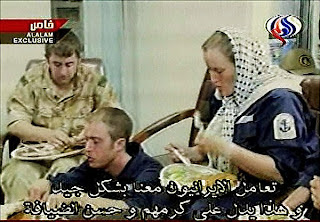 Faye Turney, 26, right, the only woman amongst the British navy personnel seized by Iran, an unidentified sailor, centre, and an unidentified marine, eat a meal, in this image made from television, in footage broadcast by Al-Alam, an Arabic-language, Iranian state-run television station, in Tehran, Wednesday March 28, 2007.

Twenty-seven years ago, Mahmoud Ahmadinejad was a student in Tehran and is said (by a former Iranian president, for one) to be among those in the U.S. embassy who seized and held American citizens hostage for more than a year.

Today, Mahmoud Ahmadinejad is president of Iran and bears less ambiguous responsibility for Western hostages. This time round, they're British subjects: 15 sailors and Royal Marines. There are a few differences between this kidnapping and the last: Back in 1979, the Iranians seized their hostages by invading a diplomatic mission -- the sovereign territory of the United States. In 2007, they seized them in international waters. In 1979, two weeks after the embassy crisis began, 13 American hostages who happened to be black were released; the remainder were held for another 14 months. In 2007, the one woman among the hostages is being offered by the regime for early release, invitingly dangled in front of the TV cameras, though with her Royal Navy uniform replaced by Islamic dress; it remains to be seen what will become of the others. On Thursday, a new generation of "student demonstrators" called for the "British aggressors" to be executed.

On this 25th anniversary of the Falklands War, Tony Blair is looking less like Margaret Thatcher and alarmingly like Jimmy Carter, the embodiment of the soi-disant "superpower" as a smiling eunuch.

But this is a season of anniversaries. A few days ago, the European Union was celebrating its 50th birthday with the usual lame-o Euro-boosterism. I said up above that the 15 hostages are "British subjects." But, as a point of law, they are also "citizens of the European Union." Even Oxford and Hoover's Timothy Garton Ash, one of the most indefatigable of those Euro-boosters, seemed to recognize the Iranian action was a challenge to Europe's pretensions. "Fifteen Europeans were kidnapped from Iraqi territorial waters by Iranian Revolutionary Guards," he wrote. "Those 14 European men and one European woman have been held at an undisclosed location for nearly a week, interrogated, denied consular access, but shown on Iranian television, with one of them making a staged 'confession,' clearly under duress. So if Europe is as it claims to be, what's it going to do about it?''

Slightly longer answer: The 15 "European" hostages aren't making that much news in "Europe." And, insofar as they have, other "Europeans" -- i.e., Belgians, Germans and whatnot -- don't look on the 15 hostages as "Europeans" but as Brits. Europe has more economic leverage on Iran than America has. The European Union is the Islamic Republic's biggest trading partner, accounting for 40 percent of Iranian exports. They are in a position to inflict serious pain on Tehran. But not for 15 British servicemen. There may be "European citizens," but there is no European polity.

OK, well, how about the United Nations? Those student demonstrators want the execution of "British aggressors." In fact, they're U.N. aggressors. HMS Cornwall is the base for multinational marine security patrols in the Gulf: a mission authorized by the United Nations. So what's the U.N. doing about this affront to its authority and (in the public humiliation of the captives) of the Geneva Conventions?

Slightly longer answer: The British ambassador to the U.N. had wanted the Security Council to pass a resolution ''deploring'' Iran's conduct. But the Russians objected to all this hotheaded inflammatory lingo about ''deploring,'' and so the Security Council instead expressed its ''grave concern'' about the situation. That and $4.95 will get you a decaf latte. Ask the folks in Darfur what they've got to show for years of the U.N.'s "grave concerns" -- heavy on the graves, less so on the concern.

Yet, like the Americans, the British persist in trying to resolve real crises through pseudo-institutions. A bunch of unelected multinational technocrats can designate an entire continent as "citizens of Europe" but, as Pat Buchanan wrote the other day, "dry documents, no matter how eloquent, abstract ideas, no matter how beautiful, do not a nation make." Similarly, the West's transnational romantics can fantasize about "one-world government," but, given the constituent parts, it's likely to be a lot more like Syria writ large than Sweden. In fact, it already is.

And, at one level, the obstructionists have a point. Russia's interests in Iran are not the same as the United Kingdom's: Why should it subordinate its national policy for a few British sailors? Conversely, why should we subordinate ours to transnational process? If saving Darfur is the right thing to do, it doesn't become the wrong thing to do because the Chinese guy refuses to raise his hand. And Darfur is an internal region of a sovereign state. If the Security Council cannot even "deplore" an act of piracy on the high seas, then what is it for?

The U.N. will do nothing for men seized on a U.N.-sanctioned mission. The European Union will do nothing for its "European citizens." But if liberal transnationalism is a post-modern joke, it's not the only school of transnationalism out there. Iran's Islamic Revolution has been explicitly extraterritorial since the beginning: It has created and funded murderous proxies in Hezbollah, Hamas and both Shia and Sunni factions of the Iraq "insurgency." It has spent a fortune in the stans of Central Asia radicalizing previously somnolent Muslim populations. When Ayatollah Khomeini announced the fatwa against Salman Rushdie, it was not Iranians but British, Indian, Turkish, European, Asian and American Muslims who called for his death, firebombed bookstores, shot his publisher, fatally stabbed his translator and murdered anybody who got in their way.

So we live today in a world of one-way sovereignty: American, British and Iraqi forces in Iraq respect the Syrian and Iranian borders; the Syrians and Iranians do not respect the Iraqi border. Patrolling the Shatt al-Arab at a time of war, the Royal Navy operates under rules of engagement designed by distant fainthearts with an eye to the polite fictions of "international law": If you're in a ''warship,'' you can't wage war. If you're in a ''destroyer,'' don't destroy anything. If you're in a "frigate," you're frigging done for.

On Sept. 11, a New York skyscraper was brought down by the Egyptian leader of a German cell of an Afghan terror group led by a Saudi. Islamism is only the first of many globalized ideological viruses that will seep undetected across national frontiers in the years ahead. Meanwhile, we put our faith in meetings of foreign ministers.

"It is better to be making the news than taking it," wrote Winston Churchill in 1898. But his successors have gotten used to taking it, and the men who make the news well understand that.
Posted by jtf at 9:27 AM