As anticipation bubbles near and far, Sox set to bow in 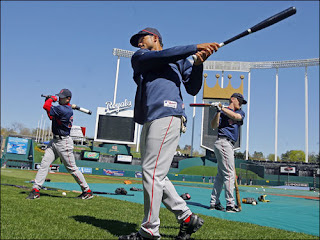 The Red Sox worked out under a deep blue sky this afternoon in Kauffman Stadium in anticipation of Monday's season opening game vs. the Royals. Getting loose while waiting for their turns in the batting cage are Boston players (left to right) catcher and team captain Jason Varitek, centerfielder Coco Crisp and rightfielder J.D. Drew.

KANSAS CITY, Mo. -- The Red Sox are the baseball Beatles. They are Elvis. They are American Idols. Also Dominican Idols and Japanese Idols.

They are national cover boys and top draws of ESPN and Fox. At this hour they have more star power than any American sports team (yes, even more than the Yankees), and they are gaining on Club Steinbrenner with the second-highest payroll in all of baseball, a whopping $145.7 million.

Sometimes it's hard to remember the Red Sox finished in third place last season, failing to make the playoffs for the first time since 2002.

After one of the most active offseasons in club history -- one in which the Sox stunned two continents with a $103 million acquisition of Japanese pitching sensation Daisuke Matsuzaka -- the Sons of Terry Francona open their regular season this afternoon against the nameless, faceless Kansas City Royals at Kauffman Stadium. More than 150 Boston and Japanese media have applied for credentials. The Royals haven't seen such a throng since they won the 1985 World Series.

Forty-year-old Curt Schilling gets the ball for Boston today and the 2004 World Series hero said, "I'm ready. We're healthy except for Mike [Timlin, strained oblique]. Now we have to go out and win games."

Schilling is an A-list baseball celebrity, a one-time Sports Illustrated co-Sportsman of the Year, one of Barbara Walters's 10 Most Fascinating People of 2004, likely to run for office one day, and a rare ballplayer who communicates directly with his fans on an exhaustive personal blog. And yet in this spring of 2007 Schilling is not even the most famous pitcher in the Red Sox' stable of thoroughbred throwers.

There wasn't a cloud in the sky, which caused rookie pitcher Daisuke Matsuzaka to close his eyes and hope for the best as he made a nice grab while blinded by the light while shagging in left field as his teammates took batting practice.


The brightest star in the Sox galaxy is Matsuzaka, the 26-year-old rookie who has been the subject of more coverage than any major league player in the spring of '07. The San Francisco Giants' Barry Bonds is within 22 home runs of breaking the most cherished record in baseball, but Bonds has been overshadowed by Matsuzaka Mania.

Think about this: The Red Sox roster includes Manny Ramírez, who makes $20 million per year and inspired headlines just by putting a grill on eBay. The Sox have David Ortiz, third in last year's American League Most Valuable Player voting, a 54-home run hitter in '06 who has a new book on the stands and is generally considered the Father Christmas of baseball. They have Jon Lester (recovering from cancer and starting the season in the minors), a courageous young man who's inspiring millions. They have Jonathan Papelbon, who could have been Rookie Of The Year last year if he hadn't been injured late in the season. They have a general manager, Theo Epstein, who is the closest thing you'll find to a front-office rock star. Then there's the ubiquitous Schilling, whose reputation precedes him and needs no embellishment here.

And yet Dice-K is The Man To See as the Sox uncork their 107th season.

Matsuzaka is not scheduled to pitch until Thursday afternoon, but he's all the rage, in New England, in Baseball America, and in Japan. He's on the cover of Sports Illustrated's baseball preview issue (a sensational story by the estimable Tom Verducci). His last two Florida spring training starts were televised on ESPN. His first Fenway start also will be on the network and when he toes the rubber at Yankee Stadium to face Hideki Matsui it's going to inspire more international coverage than Neil Armstrong's walk on the moon in 1969. One small step for man, one giant leap for Red Sox Nation. 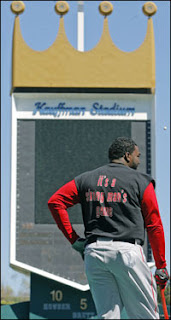 Slugger David Ortiz, shown while waiting his turn in the batting cage) wore a shirt that read on the back "It's a strong man's game".


Brigham's is already marketing a new flavor -- Dice Kream -- and it probably won't be long before there's a new Dice-K dance craze on par with the Twist of the 1960s and the Macarena of the 1990s. How long before everybody's doing the Gyro?

The Sox have sold out 307 straight games at Fenway. They will sell out their entire home schedule despite charging the highest prices in baseball. And this might be the year they finally draw more fans on the road than the Yankees. Red Sox popularity stretches across the Pacific, where folks have been getting up at 3 a.m. to watch Dice-K pitch in exhibition games.

Television loves the Red Sox. Three Sox spring training games were televised by ESPN during one six-day stretch. The Sox are on ESPN today, and again Sunday night in Texas (Schilling on Easter, which seems only fitting). Dice-K's first Fenway start will be nationally televised and the Sox are scheduled to be Fox's Saturday feature game nine times this summer.

"We pretty much think of baseball as the Red Sox and Yankees and everybody else is the Washington Generals," said one ESPN employee who shall remain unnamed.

You can be sure commissioner Bud Selig is hoping the Red Sox and Yankees make it back to the ALCS this year. He'd certainly rather celebrate the Sox than allow Bonds to take baseball's center stage with his joyless, fraudulent pursuit of Hank Aaron's career home run record.

The Sox have their questions as they embark on the new season. Veteran catcher Jason Varitek has stopped hitting, rookie second baseman Dustin Pedroia is a suspect/prospect, the bottom third of the order looks thin, and the defense up the middle is relatively weak. Two of the starting pitchers are 40 and the most reliable middle reliever, Timlin, is starting the season on the disabled list.

But J.D. Drew looks like a major upgrade in right field and should fit nicely behind Manny and Big Papi. Meanwhile, Papelbon has a chance to be a Mariano Rivera-esque closer and the Sox go into the season with better starting pitching than just about any team.

Enjoy the ride. Just remember that the Red Sox no longer belong to New England. They are North America's team. They are Japan's team. This is the year the Nation goes global.

Dan Shaughnessy's e-mail address is dshaughnessy@globe.com.
Posted by jtf at 7:14 AM