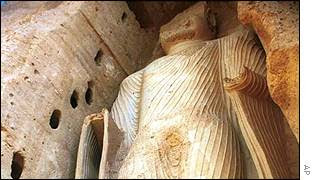 The Taliban blew up what was believed to be the world's tallest standing Buddha (175 feet) in Afghanistan in March of 2001.

I was jolted in my mind, almost like experiencing a car wreck, suddenly and without any warning. This totally incongruous sound intruded upon and encompassed everything, causing even the birds to rustle in the darkness.

It was just after 4 a.m. I was seated underneath the holy Maha Bodhi Tree in Bodh Gaya, in the state of Bihar in India. It was a few days past the full moon of May 2004, a few days past Veesak. This was my second visit to this unparalleled location, the site of the Lord Buddha’s attainment of full Enlightenment over 2,500 years ago. Now, towards the end of my 10 day stay, I had applied for and been granted the great honor of permission to spend the night within the Maha Bodhi compound.

My plan was to spend the entire night practicing seated meditation, walking meditation, and circumambulation of the great Maha Bodhi Stupa. The air was warm and my practice was going very well as I alternated between the three practices, as the hours passed.

The beautiful waning full moon light filtering through the glistening leaves of the Maha Bodhi Tree, the soft fluttering of the leaves, the serene quiet, took me back to that time long ago when the Buddha himself had sat very near this same exact spot.

The mussein’s call to prayer for the faithful of Islam, here in this most sacred location to all of Buddhism, ripped me back to modern reality. I was stunned! How could this be? Here in one of the most significant spots of Buddhism, loud speakers come on at four in the morning every day, to shock and intrude upon meditators and Buddhist practitioners using this spot for that which it has to offer in its most special way?

How could this be allowed? It is…

The Muslim call to prayer seemed to go on and on…..20 minutes to a half-hour later, the scratchy recording thankfully ended and quiet returned.

My concentration was thoroughly blown. Instead of following my breath, I found myself looking at the great distraction and paradox I had just experienced.

I thought about Mecca!

No way! I could imagine immediate death being visited upon anyone that would even try – that is, if they would be admitted anywhere close to the Muslims’ holy Kabah – let alone be allowed to set up a loud public address system that would broadcast the message of another religion across the courtyards of the Grand Mosque, or any other Moslem religious site. The hypocrisy was astounding.

After awhile, I ceased to be so shocked and began to calm down. I began to see that this was merely a continuation of a long and sad trespass against Buddhism perpetrated by the faith of Islam.

In my previous visits to India, I had visited every site that was specific to the actual life of the Lord Buddha. At every location the pattern was the same: Just the partial foundations remaining of what had once been great Stupas or elaborate religious universities of Buddhist learning and practice. Even the place of the Buddha’s birth had been destroyed and buried, with modern day excavations only now giving some restoration.

I had learned from guides on location, and then from further studies once I returned home, that these locations had all been laid to waste in the early Moslem invasions of India, starting in the 900’s by Turkic hordes issuing forth from what is now Afghanistan, and continuing for over a thousand years until the Mughal era. A prolonged and calculated assault, an assault designed to wipe an entire belief, an entire religion, off the face of the Earth. The long history of Islam, being spread by the sword and by fire, had left its indelible mark on these wonderful peaceful, harmless, legacy sites of Buddhism.

I learned how the monks and nuns and religious students were slaughtered without mercy and piled up and burned, and all terrified survivors were driven like dry leaves before a strong wind, out of the region of India entirely, wherever this Islamic wind blew.

I was told this is how Buddhism actually came to Tibet and Southeast Asia, by Buddhists fleeing for their lives! My faith had been rendered a refugee faith via the tender mercies of Islam.

I learned how Islam was particularly unkind and brutal to Buddhists, because to Moslems the Buddhist represented the most reprehensible type of human personality: the “atheist” holding no monotheistic God image as their object of worship and veneration. We were worse even than the far more numerous Hindus, with their vast pantheon of multiple gods. The Buddhists, to the Muslims, only worshipped the image of a man, and no God higher.

Apparently they did not bother to look into the philosophies of Buddhism any more deeply. That was enough for the sword to come down and the fire to be applied. And so they have over the centuries until today.

I remember, some years back, before the gripping situations that we face today had quite come in to focus for many of us, I followed the story of the great Buddhas of Bamiyan, in sad and war torn Afghanistan. The Russian war was over, and the rein of the Taliban was in full force, but they were not content to merely rule the people with an iron hand by the strictest applications of Sharia law. They had to physically erase the “infidel” past, as well. 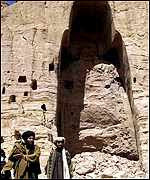 The statues, demolished by the Taliban, dated back to the second and fifth centuries. They were two of Asia's great archaelogical treasures.

I remember shedding tears as I saw the footage of those magnificent Buddhas, the tallest ancient statues in the world, being reduced to rubble by explosive charges and artillery shells. I remembered hearing on the news footage, that same cry of “Allahu Akbar!” – as the dust of Bamiyan settled to reveal the emptiness of the destruction. The same cry that destroyed my meditative absorption under the Bodhi Tree.

Now, I pray we never hear this call in this our home, America. Not until and unless Islam totally and completely reforms itself after over a thousand years of ravaging and sweeping all others before it.

I feel, through my direct experiences of it, that Islam has not changed its ways in the least. In fact it has become more aggressive now than at any time since its period of greatest expansion in the 900s to the 1200s. “Modern” Islam seeks to return humanity to those very same times – a revival of the dark ages of Islamic slaughter, mayhem, and pillage – all in the name of Allah.

We Buddhists must realize that we, and our cherished practices, would be swept away entirely and crushed utterly, should Islam ever gain ascendancy in this world in which we live. Islam is the only belief that propagates itself thus – by the sword.

And it is very patient.


Dhammajarat is the pen name of a Buddhist author.
Posted by jtf at 6:07 AM