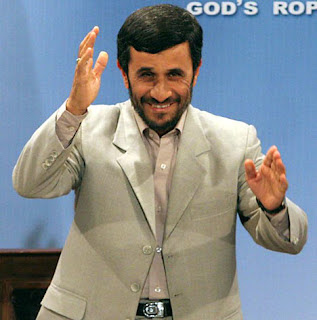 Iranian President Mahmoud Ahmadinejad: awarded medals to the coastguards he said had captured the sailors and marines


The president of Iran shook hands with the British hostages this afternoon after announcing he was freeing them.

Mahmoud Ahmadinejad smiled as he talked through an interpreter to several of the men held captive for 13 days in the capital Tehran. One of them was heard to say to him: "Thanks for releasing us. I wish you success.”

The men were dressed in suits and Leading Seaman Faye Turney, the only woman in the 15-strong patrol of marines and sailors, wore a blue headscarf and pink shirt but it was not thought she had shaken hands with the president.

Mr Ahmadinejad joked when he met one of them, saying: "How are you? So you came on a mandatory holiday?"

It was a bizarre end to a tense international stand-off which began when the Navy personnel were seized at gunpoint by Revolutionary Guards on the Shatt al Arab waterway. The meetingwas clearly staged for the Iranian media but there was no mistaking the relief of the Britons.

Mr Ahmadinejad said he had pardoned them as an Easter present for the British people and to mark the birthday of the Prophet Mohammed.

The Navy personnel are said to have shouted for joy on hearing the news and their families were planning to hold parties tonight.

The hardline president's comments came after the UK was said to have begun direct talks for the release of the HMS Cornwall personnel with Iran's chief negotiator Dr Ali Larijani.

Earlier, Mr Ahmadinejad said Iran would never accept trespassing of its territorial waters. "On behalf of the great Iranian people, I would like to thank the Iranian coastguard for courageously defending our Iranian territorial waters," the president added.

He then pinned medals on the chests of three coastguard officers. 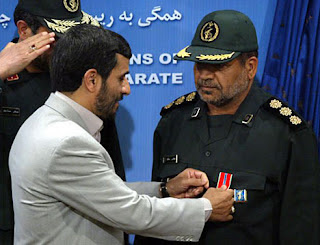 President Ahmadinejad homed in on the plight of Leading Seaman Faye Turney, the only female captive, questioning why such a difficult job had been given to a mother. "Why is there no respect for motherhood, affection?" he demanded.

Tony Blair's spokesman said they welcomed the news and said efforts were being made to find out when they would be flown home. One Iranian diplomat spoke of a BA flight out of Tehran tomorrow.

Maggie Batchelor, the sister of the youngest captive Arthur Batchelor, 20, said: "I can't wait to get through that door to see him again. It's such a relief that he's okay and he's well, plus the other lads as well. The other families must be as happy as I am. But I don't think I'll be very happy until he's on that plane."

Brian Rawsthorne, whose grandson Nathan Summers was among those held, said: "We are over the moon. The news hasn't sunk it yet. I think he's handled himself wonderfully." His wife added: "We've been devastated these last thirteen days. They've been the longest of my life."

Iran appeared to be trying to turn the seizure of the patrol, which has been condemned by governments across the world, into a diplomatic victory with a beaming Mr Ahmadinejad speaking to the Navy personnel. One said: "Your people have been very kind to us." Mr Ahmadinejad wished them "good luck" and "success".

"We appreciate it. Your people have been really kind to us, and we appreciate it very much,î one of the sailors could be heard on the footage. Another was heard to say: "We are grateful for your forgiveness." Mr Ahmadinejad responded to him in Farsi: "You are welcome."

In a speech before he announced their release, Mr Ahmadinejad launched into a fierce criticism of British and American foreign policy.

He also criticised Mr Blair for deploying Leading Seaman Turney in the Gulf, pointing out that she is a woman with a child.

"How can you justify sending a mother away from her home, her children? Why don't they respect family values in the West?" L/S Turney has a three-year-old daughter Molly.

The president also appealed in his press conference for a softer approach from the United Nations over Iran's nuclear ambitions. The UN has imposed sanctions against Tehran because of concerns it is seeking to develop nuclear weapons.

Downing Street said: "We welcome what the president has said about the release of our 15 personnel. We are now establishing exactly what this means in terms of the method and timing of their release."

Mr Ahmadinejad said that Mr Blair was wrong to ratchet up the row by taking the issue to the United Nations to try to condemn Iran. However, the release of the Navy crews is likely to be seen as a diplomatic success after the Prime Minister's chief foreign policy adviser Sir Nigel Sheinwald held talks last night with Dr Ali Larijani, Iran's international negotiator.

After their discussions, Downing Street issued an unexpected statement raising the prospect of a swift resolution to the crisis through direct talks.

Mr Ahmadinejad said Iran was not seeking a "confrontation" when it intercepted the British, "but the deplorable conduct of the British government led to the prolonging of this incident."

Iran sparked outrage by parading L/S Turney and other captives on TV "confessing" to having entered Iranian waters, a fact that the UK strongly denies.
Posted by jtf at 10:40 AM