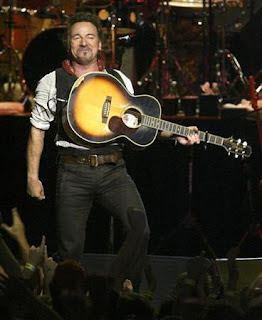 Columbia Records will release 'Bruce Springsteen With The Sessions Band Live in Dublin' June 5, a concert DVD, and separate two-CD set release. The two-CD set and DVD both feature 23 songs drawn from the band's performances in Dublin, Ireland at The Point on November 17, 18 and 19, 2006. Songs include fan favorites from 'The Seeger Sessions,' radical interpretations from the Springsteen songbook and rare songs appearing for the first time on any Springsteen release.

Springsteen's longtime manager Jon Landau said, "'Live in Dublin' charts the development of a band from an informal gathering in Bruce's living room to an onstage powerhouse. It also documents the growth in Bruce's vision of American music; it includes folk music, blues, Dixieland, country, swing, gospel, rock, down to and including his own writing. It's all performed with Bruce's classic energy and focus. I think it's some of the finest music he's ever made." 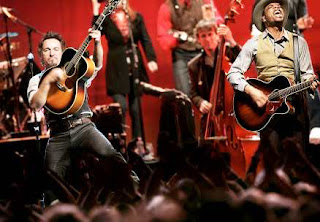 The DVD and CD captures the band during the finale of its multi-leg 2006 tour. The Word Magazine (UK) said of a concert on this tour, "I have never, make that NEVER, seen a show better than the one mounted by Bruce Springsteen and his band at Wembley Arena on Saturday, November 11, 2006." The Sunday Business Post Agenda (UK), in a 5 star review, said, "During the concert's numerous high points, the crowd was ecstatic and Springsteen was the preacher, spreading a welcome message: We're open all night."

Bruce Springsteen with The Sessions Band's tour last year prompted other incredible reviews. "Sometime, somewhere, a more dramatic and exhilarating confluence of music with moment may have existed... But in nearly 40 years of concert-going, I haven't witnessed one," said LA Times. The Washington Post declared, "It was the best live show I've seen in at least five years. (And I've seen a few.)" Meanwhile, The Independent (UK), said, "It's been an astonishingly rich evening." The Observer (UK) proclaimed, "Springsteen and the Seeger Session band were an inspiring triumph."

'Bruce Springsteen With The Sessions Band Live in Dublin' was produced by George Travis and produced and edited by Emmy Award winner Thom Zimny, who recently took home a Grammy Award for directing "Wings For Wheels: The Making Of Born To Run," a DVD in the acclaimed 'Born To Run' box set. Legendary mixer Bob Clearmountain mixed the DVD in both stereo and 5.1 surround sound. Bob Ludwig mastered the DVD and CD at Gateway Studios. Documented with nine cameras, the concert was filmed in High Definition (HD).

Bruce Springsteen With The Sessions Band Live In Dublin' Tracklisting

Bonus Songs:
Love of the Common People
We Shall Overcome