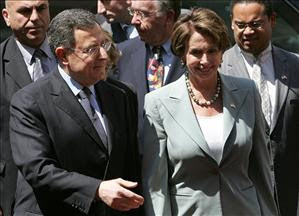 
Congressman Tom Lantos, who is a member of the delegation that House Speaker Nancy Pelosi is leading to Syria, put the mission clearly when he said: "We have an alternative Democratic foreign policy."

Democrats can have any foreign policy they want -- if and when they are elected to the White House.

Until Nancy Pelosi came along, it was understood by all that we had only one president at a time and -- like him or not -- he alone had the Constitutional authority to speak for this country to foreign nations, especially in wartime.

All that Pelosi's trip can accomplish is to advertise American disunity to a terrorist-sponsoring nation in the Middle East while we are in a war there. That in turn can only embolden the Syrians to exploit the lack of unified resolve in Washington by stepping up their efforts to destabilize Iraq and the Middle East in general.

Members of the opposition party, whichever party that might be at a given time, knew that their role was not to intervene abroad themselves to undermine this country's foreign policy, however much they might criticize it at home.

He understood that we were all in this together, however we might disagree among ourselves about the best course to follow.

Today, Nancy Pelosi and the Congressional Democrats are stepping in to carry out their own foreign policy and even their own military policy on troop deployment -- all the while denying that they are intruding on the president's authority.

They are doing the same thing domestically by making a big media circus over the fact that the Bush administration fired eight U.S. attorneys. These attorneys are among the many officials who serve at the pleasure of the president -- which means that they can be fired at any time for any reason or for no reason.

That is why there was no big hullabaloo in the media when Bill Clinton fired all the U.S. attorneys across the country -- even though that got rid of the U.S. attorneys who were conducting an on-going investigation into corruption in Clinton's own administration as governor of Arkansas.

So much hate has been hyped against George W. Bush that anything that is done against him is unlikely to be questioned in most of the media.

Once it becomes accepted that it is all right to violate both the laws and the traditions of this nation, and to undermine the ability of the United States to speak to other nations of the world with one voice, we will have taken another fateful step downward into the degeneration of this society.

Such a drastic and irresponsible step should remove any lingering doubt that the Democrats' political strategy is to ensure that there is an American defeat in Iraq, in order to ensure their own political victory in 2008.

That these political games are being played while Iran keeps advancing relentlessly toward acquiring nuclear weapons is a fateful sign of the utter unreality of politicians preoccupied with scoring points and a media obsessed with celebrity bimbos, living and dead.

Once Iran has nuclear weapons, that will be an irreversible change that will mark a defining moment in the history of the United States and of Western civilization, which will forever after live at the mercy of hate-filled suicidal fanatics and sadists.

Yet among too many politicians in Washington, it is business as usual. Indeed, it is monkey business as usual, as Congressional Democrats revel in the power of their new and narrow election victory last year to drag people before committee hearings and posture for the television cameras.

It has been said that the world ends not with a bang but with a whimper. But who would have thought that it could end with political clowning in the shadow of a mushroom cloud?


Thomas Sowell is a senior fellow at the Hoover Institute and author of Basic Economics: A Citizen's Guide to the Economy.
Posted by jtf at 6:32 AM