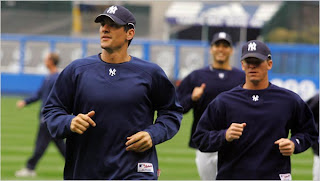 The 57,478 seats at Yankee Stadium were empty yesterday on a chilly and gray afternoon. But shortly after 1 p.m., the ballpark began to hum with anticipation.

First, Thin Lizzy’s “The Boys Are Back in Town” played over the loudspeakers. Then the Yankees filed onto the field for their final workout before the 2007 season.

The players looked excited to be back at Yankee Stadium after spending so much time preparing at spring training. Derek Jeter and Alex Rodriguez were smiling as they emerged from the clubhouse, and they playfully climbed the dugout steps together.

The Yankees begin their season this afternoon at the Stadium against the Tampa Bay Devil Rays with some new faces and some old ones who have not played with the team in a while.

“Opening day, you’d like to say it’s another game,” Manager Joe Torre said. “But you know it’s more than that.”

Carl Pavano will make the first opening day start of his career, going against the Devil Rays left-hander Scott Kazmir. And the Yankees will have the same lineup they used in Saturday’s 3-3 tie with the Detroit Tigers in Tampa, Fla.

The right-handed-hitting Phelps beat out Doug Mientkiewicz, who bats left-handed, for a spot in the lineup. Phelps said yesterday that Torre did not plan on a strict platoon, meaning that the first basemen, each new to the Yankees, would see action against left-handers and right-handers.

“I think it’s a privilege and an honor,” Phelps said about starting the opener.

Being back at Yankee Stadium meant different things to different players. For Pavano it represented a rebirth of sorts. He has not pitched in more than a year and a half because of a string of injuries that led to his competitiveness being questioned in the clubhouse.

“I’m ready to put all that behind me and move forward,” Pavano said. “And it starts tomorrow, as far as I’m concerned.”

Pavano was surprised when he walked into the clubhouse and discovered that his locker had been moved from one side to the other, and next to Andy Pettitte’s. Torre said the two had been paired for no particular reason that he knew, but he added that having Pettitte’s advice at his disposal would only benefit Pavano.

Pettitte has not started at Yankee Stadium since the 2003 World Series. Being back at the ballpark represented a homecoming. He said he was surprised by how little things had changed.

When Pettitte pitched for the Yankees from 1995 to 2003, he would arrive at the ballpark and head straight into the clubhouse.

Yesterday Pettittte walked directly onto the field and peered at the sea of empty seats.

“Now that I’m back and I’m here, it doesn’t seem like it was that long ago,” Pettitte said. “Where when I was gone, it seemed like it never really existed.

“It’s just strange how time can separate you from something but yet how comfortable you can get once you come back.”

There was another noteworthy clubhouse switch. Mariano Rivera occupied the corner locker that for the past 10 seasons had belonged to Bernie Williams, who passed on an invitation to spring training and was not offered a major league contract. Before Williams, the locker belonged to Don Mattingly until he retired after the 1995 season. The locker was then left vacant for one season.

“This locker, when I came here, was Mattingly’s,” said Rivera, who was given the spacious locker because of his seniority. “So I think I can say it’s a good thing being in this corner, a lot of pressure. You have to do the job now.”

The locker that belonged to Cory Lidle will remain vacant for the season. Jason Zillo, the Yankees’ director of media relations and publicity, said it was a way to pay tribute to Lidle, the pitcher who died when his small plane crashed into a Manhattan high rise in October after his only season with the team.

Lidle’s wife and son will take the mound for the ceremonial first pitch today.

Chien-Ming Wang, who will start the season on the disabled list with a pulled right hamstring, threw 40 pitches in a bullpen session yesterday in Tampa but has not been cleared to pitch from the top of a mound. He is expected to join the Yankees in late April.

Tyler Kepner contributed reporting.
Posted by jtf at 6:53 AM