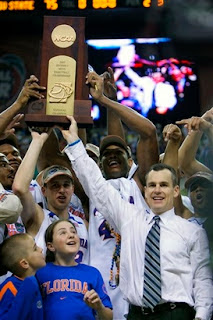 Florida coach Billy Donovan holds up the championship trophy after defeating Ohio State 84-75 in the Final Four basketball championship game at the Georgia Dome in Atlanta.

ATLANTA -- Against Purdue, against Butler, against Oregon, and even, God forbid, against Jackson State, I thought they were begging for it. I feared the Florida Gators were going to be this year's UConn; i.e. The Team With The Most Talent That Threw It All Away.

But once the Gators got to Atlanta, they had their game faces back on. They led UCLA for the final 26 minutes and 54 seconds of Saturday's semifinal and they led Ohio State for the final 32 minutes and 16 seconds of last night's championship game and they have done what they set out to do. The Florida Gators are the repeat champions of the college basketball world.

"I'm so proud of my guys," said coach Billy Donovan. "I think this team should go down as one of the best teams in college basketball history. Not as the most talented, and not on style points, but because they encompassed what the word 'team' means.

From the time Taurean Green sank three free throws to break an 11-11 deadlock, they had it. They were just better than Ohio State, just as they were clearly better than UCLA. They have the most diversified portfolio the college game has seen in a long time. Well, 15 years, anyway.

Let the comparisons to the Duke championship teams of 1991 and '92 begin. Donovan is right, and he is also being a bit too restrained in the praise of his team. You really do have to throw the Gators into the discussion of greatest short-term college teams of all time, for no other reason than the fact that this quite routine handling of an Ohio State team that had won 22 straight gave Florida 18 consecutive postseason wins.

It's a far different, far more perilous college basketball world than it was in Ye Olde Wooden Days, when UCLA would be fast-forwarded to the West Regional and would have a good chance of playing it in Los Angeles. Nowadays, the NCAA really makes you earn it.

But nothing fazes this Florida team, which just has too many weapons and is overpowering and deadly at both ends of the court. They can beat you inside with a trio of skilled big men (they even added a fourth last night in burly freshman Marreese Speights) and they can beat you outside with the shooting of Corey Brewer, Lee Humphrey, and Green, who combined to go 10 for 18 on threes in the white heat of an NCAA championship game attended by 51,458 fans and watched by additional millions from Fairbanks to Fort Lauderdale.

And they also pay very close attention in the rebounding and defense departments.

The aggressive, swarming Florida defense was one of the keys to the first half, when the Gators picked up 12 points off Ohio State turnovers. You knew from the start that Florida was not going to squander this opportunity to make history on the basis of laziness. Oh, no. These Gators let the Buckeyes know they had come to play some serious basketball. 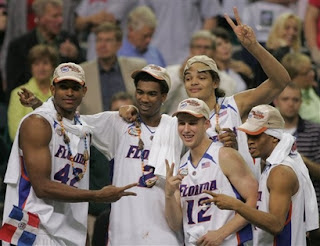 But none of those schools did it in the modern era, when high-profile high school players only stick around for a year or two, tops, before skipping off to the NBA with all its riches and glory. And did I mention the riches? Even in the Duke scenario, no one even thought to ask if, following their 1991 championship game triumph over Kansas, mainstays Christian Laettner, Bobby Hurley, and Grant Hill would be back to defend. It just wasn't an issue.

Florida offers a different tale. Following last year's 73-57 conquest of UCLA, it was just assumed that Donovan had seen the last of his wonderful all-sophomore frontcourt. Joakim Noah was the tourney MVP. He'd be going. Al Horford had established his credentials as an inside force. He'd be going. And Brewer, who had an ailing father and really could have used the money, why, it was a major mortal lock he'd be going.

They put the pedal to the metal most of the time, but surely not all the time. They actually came in for a lot of criticism late in the season, when, after clinching the Southeastern Conference East Division title with four games remaining, they lost three out of four, including a perplexing game in Baton Rouge when LSU star Glen "Big Baby" Davis didn't even play. All over the country, people were asking the same thing: Are the Gators too full of themselves?

Their response was to roar through the SEC tournament, beating Georgia by 17, Ole Miss by 21, and Arkansas by 19. But when the NCAA Tournament began and they had trouble with Jackson State for a half, and when they had a difficult time with Purdue, Butler, and Oregon, the doubters (yeah, I was one) again started to worry and ask the question anew: Are the Gators too full of themselves?

It was a fair question, but last Saturday evening we all got the answer: an emphatic no. The Gators arrived here in a take-no-prisoners mode, taking the lead on UCLA at 16-14 and never looking back and then taking the lead last night on Ohio State at 14-11 and soon establishing clear superiority. They were up by as many as 13 (40-27) before halftime, and they were in complete control.

The great calling card of Florida is, as Donovan says, their phenomenal t-e-a-m nature. The five starters average between 10 and 13 points a game. They nailed down the championship last evening with Noah limited to 21 foul-plagued and (for him) relatively inefficient minutes. But there is always someone to step forward. In both games here the key man was Brewer, the 6-foot-8-inch forward (13 points, 8 rebounds). Or was it Horford (18 points, 12 rebounds), who made some killer second-half hoops? Or was it Green, whose 16-point, 6-assist evening included going 3 for 3 on threes? Or was it Humphrey, the senior had 10 threes in last year's Final Four and added eight more this year?

You know what? If they aren't a bit full of themselves, maybe they should be.
Posted by jtf at 7:11 AM