With Murcer providing vibes, even A-Rod can A-tone 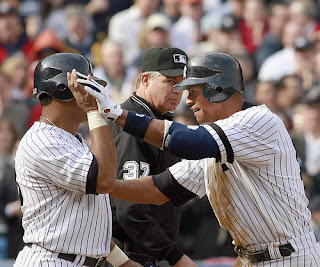 Alex Rodriguez (R) is greeted by Bobby Abreu who scored on Rodriguez's home run to make it a 9-5 lead in the eighth inning.

What an Opening Day the Yankees provided their legions yesterday, filling the first few innings with the whole gamut of emotions, including even a little A-Rod dark comedy, before finally flexing their $163 million payroll advantage over the poor Tampa Bay Devil Rays. 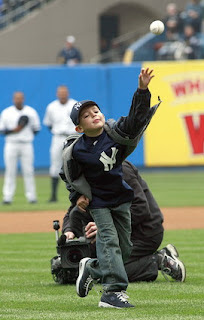 It began with tears for Cory Lidle's widow, Melanie, and son, Christopher, who performed the ceremonial first pitch duties in honor of the ex-Yankee pitcher killed in a plane crash over Manhattan last October, and ended with cheers for Alex Rodriguez, who atoned for his first-inning muff of a two-out foul pop with a monster game-breaking home run in the eighth, and Mariano Rivera, for being Mariano Rivera and striking out the side in the ninth to seal the 9-5 Yankee win. And in the middle of all that, the sellout Stadium crowd heaved with emotion and stood applauding as Bobby Murcer, recovering from brain tumor surgery, waved to them from the broadcast booth as Rod Stewart's "Forever Young" sounded from the PA system. 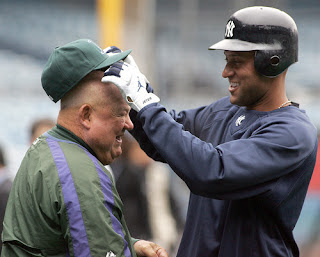 Yep, this was a day in which no one and nothing was forgotten.

At the conclusion of their ritualistic roll call of the Yankee starting lineup, the Bleacher Creatures immediately launched into "We want Bernie!" but Bernie Williams was one Yankee notable who did not make a surprise appearance. Even Steve Swindal, presumably now estranged from the Yankee hierarchy in the wake of his impending divorce from George Steinbrenner's daughter, Jennifer, was on the scene.

And, of course, it also was worthy of note that Carl Pavano showed up for his appointed rounds as Joe Torre's Opening Day starter. Until Pavano actually took the mound for the first time June 27, 2005, there was always going to be that suspicion of some sort of freak injury befalling him. Yet, there he was, even if his teammates didn't exactly show their appreciation behind him.

Heck, it was barely six minutes into the game that A-Rod received his first shower of leftover boos when, with two out and Carl Crawford on third, he circled under and dropped Ty Wigginton's wind-blown foul pop up the third base line. To his credit, Pavano didn't allow this to deter him as he retired Wigginton on a comebacker.

"I know what it looked like and A-Rod got the error because he was closest to the ball," said Joe Torre, "but in truth Jorge (Posada) should have made the play but he kind of gave up on it a little too soon."

It sure began to look as if this was going to be a continuation of A-Rod's postseason woes when, in the bottom of the first, he struck out with runners at first and second as ex-Mets prospect Scott Kazmir first froze him on a 2-1 changeup down the middle and then got him to chase a tailing fastball off the outside corner. That left matters to Giambi, Lidle's best friend from high school, who was still wrapped up in the emotion of having escorted Melanie and Christopher to the mound for the first-pitch ceremony. 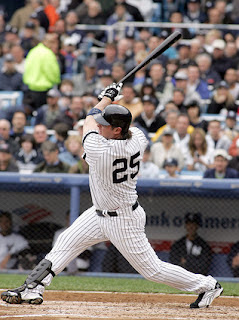 On a 3-1 fastball from Kazmir, Giambi reached out and stroked a single to right-center, scoring both runners who had each moved up a base on the A-Rod strikeout.

"That was one of the toughest things I ever had to do in my life," said Giambi of the first-pitch ceremony, "but I had to be strong for Melanie. It was a lot of emotion that you try to put it into a positive."

The coincidence of Giambi getting a big hit in memory of his fallen best friend could not have been lost on Murcer, who did the same for his best friend, Thurman Munson, some 28 years earlier when, after flying home with the team from the Yankee catcher's funeral in Canton, Ohio, he hit a home run to beat the Baltimore Orioles that night. 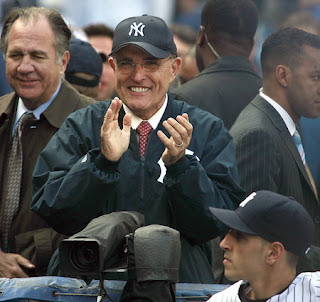 Rudy Giuliani applauds after the Yankees defeated the Devil Rays at Yankee Stadium.

"I'm just so happy and grateful to be here for Opening Day," said Murcer, who had been a part of 33 previous Yankee openers, home and away, since 1966 as a player and broadcaster. "There's only going to be one more at this stadium (a new Yankee Stadium is targeted for 2009) and I wanted to be here to wish the players well and thank everyone for their prayers."

In terms of overall drama, emotion and ultimate success, it'll be hard to top this one, though. After the Devil Rays rose up and scored four runs in the fifth, knocking Pavano from the game, the Yankees shook off all their earlier misfires and got down to business against the minimum-salaried Tampa Bay bullpen. Derek Jeter atoned for his throwing error in the second by singling home two runs in the sixth to tie the score, and Giambi put them ahead with an RBI single in the seventh after A-Rod had singled and stolen second.

And you can call A-Rod's two-run homer in the eighth "garbage time" if you want, but there could be no denying the impact it had on this afternoon of tears, jeers and cheers. It was the perfect capper for a complete day in which A-Rod was able to shake off his early jitters and let his talent take over.

As Torre said: "There's enough emotion on any Opening Day, but this one was a roller coaster."

To which no doubt 56,035 would most heartily agree.

bmadden@nydailynews.com
Posted by jtf at 6:56 AM