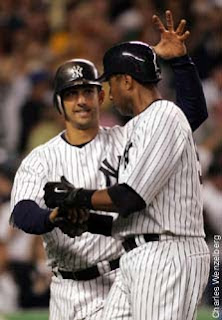 PINING FOR BERNIE:Jorge Posada is holding out "a sliver" of hope that Bernie Williams (right) will return to the Yankees.

April 2, 2007 -- It was another Yankee catcher who said, "It ain't over 'til it's over." When it comes to Bernie Williams, Jorge Posada believes the same thing.

Posada said yesterday that he's hoping against hope that Williams can still eventually resume his professional career, even though the longtime cornerstone is missing after parts of 16 seasons as a Yankee.

At 11:09 a.m. yesterday, Mariano Rivera stepped into the corner locker formerly occupied by Williams. He changed out of street clothes and into pinstripes, and that's when the passing of the torch officially began inside the home clubhouse at Yankee Stadium.

Williams had been with the major-league team off and on since 1991. When Rivera first arrived in 1995, Don Mattingly was the star in the corner. Williams had occupied the corner locker for years.

Posada said he hadn't really talked with the 38-year-old in recent weeks.

"Not having Bernie around is weird," Posada said. "It doesn't matter who's in the locker. It's just not having him around, and not being able to talk to him - and really have him around and do the things we do when he was here is a little weird."

Andy Pettitte, a Yankee from 1995-03, returned this season to his old haunts, but it was bittersweet not having Williams there with him. The two won four World Series rings together.

"Obviously, you realize he's not here and you think about him," Pettitte said. "And you hate it.

"You hate the way things have turned out. He was here a long, long time. He was a great teammate. He'll definitely be missed."
Posted by jtf at 6:57 AM