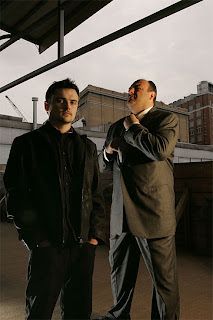 Mob rule: Robert Iler and James Gandolfini, photographed at Chelsea Piers Studios, have been son and father on HBO's Sopranos for eight years.

NEW YORK — Robert Iler doesn't recall much about that summer in 1997, when at age 12 the former Pizza Hut pitchman won the role of a mobster's bratty son in the pilot episode of an edgy new cable drama.

"I just remember not wanting to be there. I wanted to be hanging out with my friends," Iler says.

Excitement built, even as veteran co-stars cautioned him that the odds were against the show ever becoming a series. "This is probably the last time you'll see any of us," he was told by Tony Sirico, who plays hot-tempered lieutenant Paulie "Walnuts" Gualtieri.

Ten years later, the cast of The Sopranos finally is preparing to say goodbye. Production is set to end on HBO's biggest hit — and one of TV's seminal series — just as nine final episodes begin airing April 8.

But not before the ties between Iler's Anthony Jr. ("A.J.") and Mob boss dad Tony take center stage, James Gandolfini, 45, and Iler, 22, reveal in their only joint interview, at a sprawling sports and studio complex on Manhattan's West Side.

"The relationship between A.J. and the parents is a very big part of the season," Gandolfini says. In burying the series after eight years and 86 episodes, creator David Chase explores the generational divide and the strange pull of the Mob "family" on the Soprano family, the heart of the series. 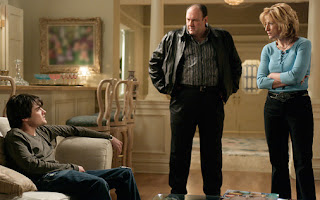 Last season, wayward teen A.J. dropped out of a local college, got fired from Blockbuster for stealing and was eager to stab his great-uncle Junior in retaliation for an attack that left Tony hospitalized in critical condition. In doing so, A.J. would have thrust himself into the mobster's life of crime.

For all the bravado, "Tony as a 19-year-old would have eaten A.J. as a 19-year-old alive, would've taken his lunch money," says Gandolfini, quoting a description by Sopranos writer/producer Terence Winter.

But as a parent, Tony has changed his tune.

"In the scene where he was going to go stab Uncle Junior, maybe in a different world Tony's father would have encouraged behavior like that, whereas Tony's like: 'You make me want to cry. You can't do this. I don't want you to do this for a living,' " Gandolfini says. "And (Tony) says to him, 'You're a good guy. You're a nice guy. You're not cut out for this kind of (stuff).' "

Do the actors bring any of their own upbringing to their TV personas? "I'm sure we do. My father used to swat me on the back of the head occasionally, which I did to him on the show," Gandolfini says, gesturing to Iler. "My father used to call me gogoots, which I didn't even tell David, and he wrote it into the show. I think it means eggplant." (Actually it's a squash, but colloquially it's an affectionate term for a stupid person.)

"His family is very old-world Italian, like mine," he says.

An unusually reflective Gandolfini speaks of a generational divide, calling Tony and his wife, Carmela, a different breed from his notoriously cold and psychologically abusive mother, Livia, as played by the late Nancy Marchand.

Which could just as easily apply off-screen.

The show's aura of authenticity also provides eerie parallels for the actors, who prefer not to discuss them. Iler pleaded guilty to robbery and drug possession in an incident in 2001; Gandolfini was in the midst of a messy divorce just as Tony and Carmela separated on-screen late in 2002.

"The show has a lot of real-life situations, not TV situations, so it's bound to happen in real life, too. And that can get a little weird," Gandolfini allows.

And it was just as strange for the adolescent Iler. "I was going from being at home arguing with my mom to going to work and arguing with my (TV) mom," Edie Falco. "It was weird; it was a great experience. I'm thinking about it now, how much I'm going to miss it. I don't know if it's fully hit me. This is going to be the first time since I'm 12 years old that I'm going to be unemployed."

Alone among his castmates, Gandolfini is itching to get out, saying that though he'll miss the cast and crew, the intensity of playing Tony for so long has taken its toll. "It's like you take a sponge and you wring out the sponge and then, you know, it's empty. After a while you've been to too many of the same places, and it's time to explore something new."

HBO chairman Chris Albrecht understands the three-time Emmy winner's emotions as the series winds down. "No one has had to take a character on this length of a journey, on this depth of a journey, through as long a period," he says.

And like a proud papa, Gandolfini is impressed with Iler's blossoming in upcoming episodes. (He's forbidden from describing them because of Chase's notorious penchant for secrecy.) Iler, he says, has "done incredible work this year; some of the scenes shocked me. I really was taken aback about how powerful some of the stuff was. Wow."

And Iler, who grew up in an Irish family, says that "after working with these people for 10 years, a part of me has become almost like Italian. I see myself pick up Italian mannerisms, little sayings. When you grow up with an Irish family, you say 'Cheers' I guess, but now, whenever I'm with my friends, it's like, 'Cent'ann'." It started like a joke between me and my friends, but now it's what I say."

Gandolfini grins, noting that "95% of the people on the show are Italian, really Italian." So for him, "it wasn't that big a stretch. I have an Uncle Al who reminds me of Uncle Junior. The only difference is the Mob stuff." 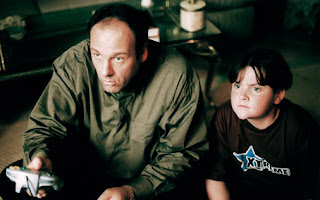 Tony and A.J. in Episode 5 of the first season

As for The End —the long-awaited and much-speculated-about conclusion to the often-violent drama — the series' final scene was shot last week at an ice-cream parlor in Bloomfield, N.J. The filming attracted throngs of nostalgic onlookers, although other scenes remain to be filmed before the series wraps its production in mid-April.

Betting sites are laying odds on which regular characters get whacked before it's all over and which loose ends are tied up. On that front, don't count on too many, thanks to the unconventional interests of creator David Chase.

But after all that has come before, the series finale "makes sense," says Michael Imperioli, who plays Soprano deputy (and cousin) Christopher, though, like life, "it's never really cut-and-dried and clean."

Adds Falco, Tony's wife, Carmela: "It's as unpredictable as everything else in this show."

Fans continue to be frustrated specifically by Chase's refusal to revisit the whereabouts of Valery, the Russian mobster last seen in "Pine Barrens," a beloved third-season episode in which Christopher and Paulie get lost in the Jersey woods.

"David has a vision of what he wants to do; he's not going to do something to have a nice clean ending, to have the audience satisfied that the Russian guy" reappears, Gandolfini says.

As the cast finished the final "table read," a run-through in which actors read through the script, "we all kind of sat there," he says. "I think for five minutes nobody said anything. It just kind of felt satisfying. Nobody was like, 'Whaaaa?' "

The actor had higher expectations than anybody: "I didn't want it to go out like something I didn't like. And I should have known he wouldn't do that."

When it ends, Iler has nothing lined up yet, but he says, "I want to start working right away." Gandolfini, who starred in a few films during the Sopranos run, plans to take some time off; he also is producing an HBO documentary about American soldiers wounded in Iraq.

But he's no longer sentimental about Tony Soprano, the character with whom he'll be forever indelibly linked: "No more beatings for a while and no more yelling for a while will be good. But I don't know what else I'm going to (expletive) play."
Posted by jtf at 11:52 AM