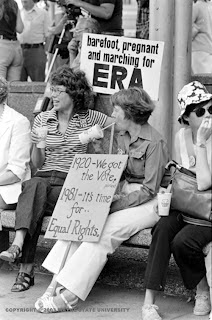 WASHINGTON -- Liberals, dolled up in love beads and bell-bottom trousers, have had another bright idea, one as fresh as other 1970s fads. Sens. Ted Kennedy and Barbara Boxer and Reps. Carolyn Maloney and Jerrold Nadler, high-octane liberals all, have asked Congress to improve the Constitution by adding the Women's Equality Amendment, which, like the Equal Rights Amendment before it, says: "Equality of rights under the law shall not be denied or abridged by the United States or by any state on account of sex.''

Although it was first introduced in Congress in 1923, the ERA went nowhere until March 22, 1972. Then Congress sent it to the states to be ratified or rejected by March 22, 1979, the standard seven years stipulated to assure that there is a contemporaneous consensus for any constitutional change.

Thirty-five years ago, as now, the argument for the amendment was a pastiche of peculiar thoughts: It was needed to "put women into the Constitution,'' and for the expressive function of "raising the nation's consciousness.'' March 1972 was a year after the Supreme Court cited the Equal Protection Clause of the 14th Amendment when invalidating a law that involved discrimination on the basis of sex. And March 1972 was 10 months before the Supreme Court ruled in Roe v. Wade.

The full inclusion of women in America's regime of rights was accomplished in the 20th century without an ERA, a constitutional redundancy that would have added nothing to the guarantees of equal protection of the laws and due process for all "persons.'' And what mature person thinks the Constitution should be cluttered with consciousness-raising pieties or affirmations, on the theory that, by some mysterious causality, the social climate will be improved?

Beginning March 22, 1972, many state legislators -- mostly men -- acted cavalierly, in several senses of that word. Hawaii ratified the ERA that day, in 32 minutes. The next day Nebraska ratified it, but so hastily that it made mistakes and had to repeat the process. Six states ratified in the first week, 20 within three months, most without hearings.

But by 1977, the drive had stalled. Thirty-five states had ratified it, three short -- not really; read on -- of the required three-fourths. So ERA supporters, their constitutional carelessness apparent in the ERA itself, turned to rigging the ratification process.

They asked Congress to extend by three years the time allowed for ratification -- although the first 10 amendments (the Bill of Rights) had required only 27 months and no amendment had to that point required even four years. In doing so, Congress disregarded the constitutional morality that an amendment should succeed only if a predetermined period of deliberation produces a consensus that is (in the Supreme Court's words) "sufficiently contemporaneous'' to reflect the will of three-fourths of the states "at relatively the same period.''

ERA supporters insisted that any state legislature that rejected the ERA could reconsider that vote, but any ratification, however slapdash or stale, is a sacramental act that can never be reconsidered. Under the Constitution's Article V, properly read, Congress is divested of all power over an amendment once it is submitted to the states. But when Congress extended the ratification period, it stipulated that the ERA could henceforth be considered only by states that had not yet ratified it. This was because three state legislatures had rescinded their ratifications, as Kentucky and South Dakota would do. So the amendment actually fell eight, not three, states short.

Most debates about proposed amendments concern whether the amendments are necessary or would be beneficial. Debate about the ERA has always concerned what it might mean. For example, would it forbid treating the sexes differently in pension and insurance plans because of actuarial data about sex-related differences regarding health problems and life expectancy? Presumably, judges would, over time, tell the nation what it had ratified.

All amendments generate litigation, but the ERA's purpose is to generate litigation. It is a device to get courts to impose social policies that supporters of the policies cannot convince legislatures to enact. ERA -- now WEA -- supporters, being politically lazy, prefer the shortcut of litigation to the patient politics necessary to pass legislation.

If Kennedy and like-minded legislators think the condition of American women needs improvements, they should try to legislate them. Instead, they prefer to hope that liberal judges will regard the ERA's language as a license to legislate. But, then, support for the amendment testifies to the supporters' lack of confidence in their ability to persuade people to support such policies.

georgewill@washpost.com
Posted by jtf at 9:39 AM

Email ThisBlogThis!Share to TwitterShare to FacebookShare to Pinterest
Labels: George Will, Marriage and Family, Politics