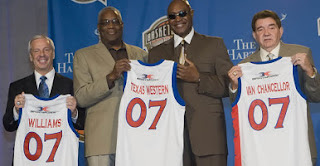 ATLANTA--Margey Frederick's family depended on the hire her husband was about to make, and she was concerned.

Bob Frederick was about to hire a basketball coach at the University of Kansas to replace Larry Brown. Understand, this was Kansas, one of the top jobs in America and fresh off the 1988 national championship. Rabid fans, tradition, Rock Chalk, all that.

And Margey Frederick's husband, Kansas's popular--up to this point, when he was about to commit career suicide--athletic director, was proposing to hire a relative unknown from the University of North Carolina, a coach named Roy Williams who wasn't even the first assistant in Chapel Hill.

Imagine that. Imagine Carolina needed to fill a basketball vacancy and the school decided to go for a second assistant who had never been a head coach at the college level and had zero ties to the school.

Now walk back in off the ledge.

So the remark has been immortalized in history, but Margey had good reason to say exactly what she said, which was:

"You're not going to hire that guy from North Carolina, are you?"

That guy won 418 games at Kansas and has already amassed 106 wins back at Carolina. And Monday, those 524 career wins and .800 career winning percentage earned him a spot in the Naismith Basketball Hall of Fame.

We love him because he's approachable, because even 20 years and a lot of money after that first introductory press conference he still checks his tab at dinner to make sure he's been charged correctly. Because he travels with a printout of the top golf courses in the world, checking them off as he plays them and comparing notes with Larry Brown and Dean Smith.
He might be your golfing buddy. It doesn't seem out of the realm of possibility, not the way it would to play with a divine presence like Smith. To us, he's ol' Roy, a guy you feel like you can slap on the back in the aisle of the grocery store and tell him about the time you used one of his defenses while coaching your son's rec league team. And that's why he can't go many places at all without a handful of people stopping him. "Coach, you probably don't remember me, but..." And five minutes later, he's still standing there smiling and nodding.

We love all that. The Hall of Fame does not care. The Hall of Fame cares about wins and championships. Sometimes we forget that. Behind the twang and the community involvement and the subtle gestures like visiting a first-year head coach in the hospital after midnight, Roy Williams is one of the best coaches in college basketball. And by the time he's done--Monday he hedged about the possibility of coaching 15 more years, but he didn't slam the door on that possibility, either--he might be in the conversation of the best college basketball coaches ever.
He will not want to hear that, of course. Monday, he said all the things you would expect him to say.

"I already had my talk ready for what I was going to say when I didn't make it," he said of the phone call all the finalists received last Wednesday notifying them of the selection committee's decision.

How did he celebrate? He skipped his noon workout and went home to tell his wife, Wanda. In the Williams household, this qualifies as wild partying. Some coaches show up on the internet in wacky pictures in compromising locations. About as compromising as Williams ever gets is sitting on the couch watching golf with a bag of potato chips.

Hall selections were a closely guarded secret, with only Phil Jackson's name leaking into the public before Monday's presentation. Williams had to tell a few close athletic department staffers in order to coordinate his appearance at the function. This is how he told them about the greatest honor anyone in his profession can receive:

This, by the way, was the last item he mentioned in the meeting, almost in an apologetic, passing way. It was the way someone would ask you to pick up something at the grocery store on the way home, an "Oh, by the way..." kind of remark.

Don't be fooled--he is honored. "It's one of the only times I've ever been speechless," he said. But he freely admitted that in Atlanta, a city consumed by Monday's Florida-Ohio State title tilt, he'd happily swap the honor for a chance for his team to participate in the season's last game.

His team knows it, too. Earlier this year, word arrived during a Carolina practice that Williams was a HOF finalist. Williams, of course, was oblivious. The staff passed the news to the seniors, and Wes Miller gathered the entire team at center court at the conclusion of practice--never during practice, of course.

"Coach, we just wanted to be the first ones to congratulate you on being a Hall of Fame finalist," Miller said. And that's how Williams found out he'd made the first round of cuts, which is exactly how he'd want it.

"I've lived a charmed life, I really have," he said.

It's a life that would make Disney skeptical. And "charmed" doesn't really do it justice, because that somehow implies there wasn't a substantial amount of work involved. You know the stories: the Coca-Colas, the calendars, the driving 504 miles roundtrip on Sundays to deliver UNC television shows just to make a few extra dollars during his early Tar Heel assistant coaching days.

Roy Williams has just been announced as a Basketball Hall of Famer. What does he do next? Does he buy the finest bottle of champagne in Atlanta and toast to his greatness? Does he post on his own personal website proclaiming he's reached the pinnacle of his profession?

Nope. He walks a few blocks down the street to The Varsity and orders a cheeseburger. He splits an order of fries with his daughter, Kimberly.

"Want to flip for who's buying?" he asks his guests, pulling a quarter out of his pocket and flipping it into the air before snatching it and placing it on the back of his hand.

Do you even need to wonder what happens next?

Adam Lucas's third book on Carolina basketball, The Best Game Ever, chronicles the 1957 national championship season and is available now. His previous books include Going Home Again, focusing on Roy Williams's return to Carolina, and Led By Their Dreams, a collaboration with Steve Kirschner and Matt Bowers on the 2005 championship team.