Kathleen Parker: The Fog of Rape 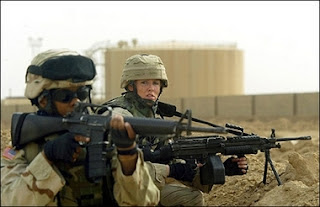 Private Cherish Cooper (R) and Private Atiyhia Goldbold (L) cover their colleagues from the 2-17 Field Artillery Regiment setting up a checkpoint in Iraq in 2004. The war in Iraq, which has killed or wounded more US women in combat than any other conflict, has redefined their role in the military and triggered a rethink of their place on the front line.

There are enough rape and sexual assault stories coming out of Iraq these days to keep Americans variously outraged and confused. In the past few weeks, two major stories have appeared -- on Salon.com and in The New York Times Sunday magazine -- reporting the difficulties servicewomen face in a testosterone-infused military.

In both stories, women reported being sexually harassed, assaulted and sometimes raped by their own comrades in arms. Many are suffering a double dose of post-traumatic stress disorder born of combat fatigue combined with sexual trauma.

Both stories, however, contain enough errors to raise questions about whether the rape-assault rate is as high as suggested. The Salon story reports, for example, that one woman was "coerced into sex'' by a commanding officer, which the Salon writer asserts is "legally defined as rape by the military.''

This is simply not true. According to the Manual for Courts-Martial, rape is defined as "an act of sexual intercourse by force and without consent.'' The same woman also was prominently featured in the Times story, where she said she was "manipulated into sex.''

Not quite rape, in other words.

The Times made a much bigger mistake in featuring another woman -- Amorita Randall, a former naval construction worker who said she had been raped twice while in the service and suffered a brain injury in Iraq when her Humvee was hit by an IED, killing her driver.

As it turned out, Randall was never in Iraq and there is no record of any sexual assault. The Times has run a correction.

No serious person doubts that sexual harassment and even rape occur in a war zone. But the degree to which sex is consensual or forced -- often a question of he-said-she-said -- is further complicated by military hierarchy and the extenuating circumstances (and passions) of war.

This is tricky terrain. No one wants to further traumatize women who have been assaulted. Even if some percentage of the reports is false or exaggerated, the numbers are high enough to warrant concern.

Doubtless many women have suffered what they report. Doubtless, too, some women exaggerate sexual assault stories.

But the $287 million-a-day question that sits like a Brontosaurus in a Baghdad mess tent is: Now what?

Is the solution more sensitivity training and more victim advocates? Already, the Department of Defense has a Sexual Assault Prevention and Response Program. Already, soldiers go through mandatory workshops on sexual harassment and assault. Already, each battalion has an equal opportunity representative to field complaints.

How much is enough to thwart the nature of the beast?

This is not to say that men at war are expected to behave badly, but there are possible explanations for some of these questionable liaisons that bear closer scrutiny.

Clearly, some of what is considered sexual harassment falls into the category of harmless sport -- the usual towel-snapping that is, in fact, a way to neutralize sex.

But more overt sexual aggression may be the product of something few will acknowledge, at least on the record: Resentment.

Off the record, in dozens of interviews over a period of years, male soldiers and officers have confided that many men resent women because they've been forced to pretend that women are equals, and men know they're not.

The lie breeds contempt, which leads to a simmering rage that sometimes finds expression in aggression toward those deemed responsible.

Targeting women isn't excusable, obviously. It's also not the women's fault that they've been put in this untenable situation -- exposed both to combat and to the repressed fury of sexually charged young men.

The fault lies with the Pentagon and others who have capitulated to feminist pressures to insert women into combat. Although women are prohibited from direct ground combat and are assigned primarily to support roles, the lack of clear boundaries in Iraq has eliminated the distinction.

Wishful thinking and bureaucratic expansion won't likely solve the problem of sexual conflict in the war zone, but a more-rational military structure that keeps women and men apart would help. As a bonus, segregation also would reduce the plague of divorces caused by men and women fraternizing away from spouses.

Finally, our commanders and fighting men could focus on the business of war rather than tending to gender skirmishes that distract commanders and steal time, resources and energy from the military's purpose.

kparker@orlandosentinel.com
Posted by jtf at 7:15 AM