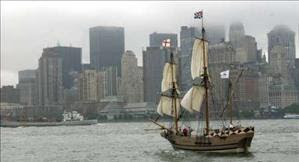 A replica of the 17th century sailing ship Godspeed, sails into New York harbor as part of America's 400th anniversary, June 26, 2006. The ship is similar to the one which landed in Jamestown, Virginia, bringing some of the earliest settlers to what would become the United States. REUTERS/Chip East (USA)

The Far East has its Mecca, Palestine its Jerusalem, France its Lourdes, and Italy its Loreto, but America's only shrines are her altars of patriotism -- the first and most potent being Jamestown; the sire of Virginia, and Virginia the mother of this great Republic. -- From a 1907 Virginia guidebook

The quadricentennial of the Jamestown settlement will be noted this spring. Whether it will be celebrated is a freighted question. Virginia has gone to some expense and effort remembering the founding settlers of 1607. Former Supreme Court Justice Sandra Day O'Connor is serving as honorary chair of what is being called "America's 400th Birthday." There will be musical performances, lectures and seminars. The Queen of England will visit on May 4 and 5.

But emblematic of our troubled understanding of our past and our present discomfort with our national identity, the powers that be in Virginia have decided not to refer to these and other observations as "celebrations." Instead, they will be called commemorations. "You can't celebrate an invasion," declared Mary Wade, a member of the Jamestown 2007 organizing committee. The native people were "pushed back off of their land, even killed. Whole tribes were annihilated. A lot of people carry that oral history with them, and that's why they use the word 'invasion' . . ."

Virginia is expecting many visitors to the reconstructed Jamestown settlement -- and it is worth the trip. We've taken the children a couple of times. But the timid, apologetic tone of some of the exhibitions detracts from the experience. As Edward Rothstein reported in The New York Times, "The Indians, we read, were 'in harmony with the land that sustained them' and formed an 'advanced, complex society of families and tribes.'"

Rothstein continues: "English society -- the society that gave us the King James Bible and Shakespeare . . . is described as offering 'limited opportunity' in which a 'small elite' were landowners." England, they tell us, suffered from social dislocation, unemployment, difficult working conditions, and so forth. The exhibit goes on to suggest that Virginia's history evolved out of the "interaction" of three different cultures: British, Native American and African.

This sort of hokum has become de rigueur at American museums. By all means, let's be honest about American history and admit that American Indians were often mistreated (broken treaties, displacement, murder). The Trail of Tears deserved its name. But the description of Powhatan culture as "advanced" is ridiculous. When the two cultures met, one was hundreds of years more advanced than the other. If the Powhatans had been further along, they would have prevailed. They certainly didn't lack the will.

One of the early setbacks (1622) for the British Jamestown settlers was a fierce Indian attack that killed 400 men, women and children. And though the exhibit does mention this elsewhere, it is worth remembering what should be too obvious to require restatement -- that precolonial America was no idyll. Indian tribes were in more or less constant warfare with one another -- just like humans in the rest of the world.

Some black leaders have objected to celebrating Jamestown's founding because it led to black slavery. It is perhaps worth recalling that Captain John Smith, a figure who gets less attention at the new Jamestown observance than Powhatan rulers Wahunsonacock and Opechancanough and African Queen Njinga, was once a slave himself. Fighting in Transylvania in 1602, he was captured by the Turks and enslaved. Through scheming and murder, Smith was able to escape back to England in 1605 and departed for Virginia soon after. His firm hand permitted the tiny outpost to survive. He memorably explained to the settlers that "He who does not work will not eat." And, as every schoolchild used to know, he believed that Pocahontas saved his life when her father captured him.

Black slavery was actually still several decades in the future when Jamestown was founded. And while neither Virginia's nor America's history can be unchained from the taint of slavery, can't we be mature about this? Keith Richburg, foreign correspondent for The Washington Post, was stationed in Africa in the early 1990s. What he saw there -- rampant corruption, casual cruelty on the streets of Nairobi, civil war in Somalia and genocide in Rwanda -- made him express gratitude that his ancestors had been dragged to the New World, the horrors of slavery notwithstanding.

There is every reason to celebrate the 400th birthday of America -- for warts and all -- there never has been a better country for all its citizens.


Mona Charen is a syndicated columnist, political analyst and author of Do-Gooders: How Liberals Hurt Those They Claim to Help.
Posted by jtf at 7:34 AM