All Buckeyes are on Oden 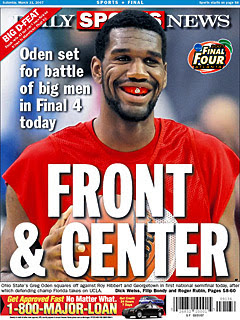 This Final 4 may be his last college test 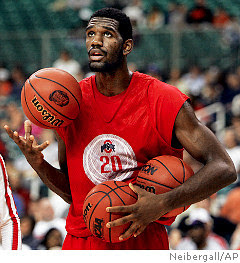 Ohio State center Greg Oden begins his practice session for the Final Four at the Georgia Dome in Atlanta.


ATLANTA - The man who once dreamed of dentistry as a solitary, stable career sat in front of a locker yesterday, surrounded by 50 reporters and protected by two Ohio State team managers playing the roles of makeshift bodyguards.

Greg Oden is in the middle of it now, soft-spoken and gigantic.

He is starting to understand what it was like for the best big men at the Final Four - for Lew Alcindor, Hakeem Olajuwon and Patrick Ewing. There is no escape from the questions about the NBA, or about his freak show of a college career.

It is impossible not to ask him, and to keep asking.

Oden is the poster player for this NCAA basketball tournament. He is the product of the latest NBA regulations that have turned tonight's semi-finals into a showcase for underclassmen. Mike Conley, his talented, longtime teammate, played with Oden in high school in Indianapolis and is also a freshman. UCLA starts three sophomores. Florida starts only one senior. Georgetown doesn't start any.

This is it, what college basketball has become. Oden is what happens when the NBA rules that players can't join the league until they are 19 years old and one year removed from high school. College basketball becomes a holding pen.

Oden had to find something to do for 12 months. Winning an NCAA championship seemed like more fun than playing overseas or hanging out with the neighborhood buddies.

So he enrolled in some courses at Ohio State - people keep asking him about his rock-and-roll history class - and within three months he is likely to become the No. 1 or No. 2 pick in the draft.

Most people who coach the college game seem to think that the Rent-A-Star structure is a reasonable arrangement. UCLA coach Ben Howland said yesterday he would prefer the NBA change the rule, forcing players who commit to college to remain in school for at least two seasons. Baseball has a three-year rule like that.

But then Howland has just recruited the next great big man, Kevin Love, the national high school player of the year. Howland can offer no guarantee that Love will stay long in school or even attend classes after his first semester.

It is not Oden's fault that he is part of this crazy system. By last year's rules, he might have gone directly into the NBA from Lawrence North High. He never had to make the decision.

Oden says he's enjoyed his experience at Ohio State; that he aced the rock-and-roll class and doesn't want to talk about it anymore.

If only he could make these reporters go away, too. Oden doesn't really look happy to be here in front of the microphones. He goes to movies by himself for relaxation. He had that dream of becoming a dentist, working with silent, jaw-affixed patients, until he grew too large.

Tonight he faces another big man, Roy Hibbert, and Oden makes a point of telling people that he will be giving up 21/2 inches in the matchup with the Georgetown center.

"I'd rather be playing against a guy smaller than me," Oden said. 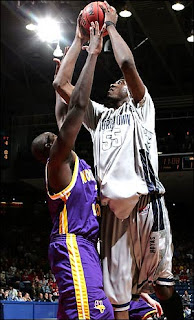 Roy Hibbert (R) averages 12.7 points and 6.9 rebounds per game for the Hoyas. The 7-2 junior scored just 5.1 points per game as a freshman but he has raised his scoring output each year. Hibbert posted a scoring average of 11.6 last season.

I nstead, he must pick on somebody his own size. The pro scouts will be watching very closely. Oden has been guilty of some sloppy habits lately. He missed half his free throws against Memphis in the regional final and he has picked up at least four fouls apiece in his last three games.

"That was just me being stupid, trying to get 25 blocks a game," he said.

Oden must be more careful tonight. He kept saying that he won't be playing against Hibbert, that he will be facing the entire Hoya team. Either way, Georgetown will go into the low post and try to get him in early foul trouble.

Oden walked out of the locker room, onto the Georgia Dome court. He practiced some free throws in front of the fans. He didn't appear too concerned.

There is always a backup plan available. The center of attention is majoring in business administration, it says right there in the Ohio State media guide.

fjbondy@netscape.net
Posted by jtf at 10:55 AM