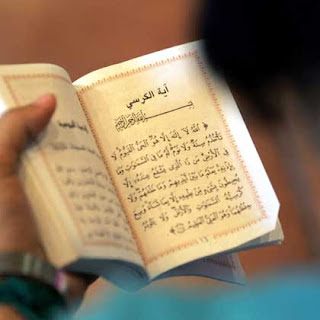 The Koran seems to have become the basis for a court decision in Frankfurt.

Beaten and threatened with death by her husband, a young Muslim mother of two in Germany petitioned a Frankfurt court for a speedy divorce. German law mandates a year-long waiting period between separation and divorce, but also contains “hardship” criteria that allow for that period to be shortened. However, Judge Christa Datz-Winter decided that this was not a “hardship” case. According to Spiegel Online, Datz-Winter quoted Qur’an 4:34, which says that “men are in charge of women, because Allah hath made the one of them to excel the other,” and that men should punish disobedient women: “admonish them and banish them to beds apart, and scourge them.” After all, Datz-Winter pointed out, both husband and wife were Moroccan.

Evidently, multiculturalism trumps even gender solidarity. Judge Christa Datz-Winter’s startling assumption that the Qur’an could be a legitimate basis for decisions in a German court is simply the logical endpoint of the disastrously self-destructive relativist multiculturalism that has governed European policy for decades now. As the historian Bat Ye’or recounts in Eurabia, beginning in the early 1970s the European Community, and then the European Union, entered into a series of agreements with the Arab League that provided for massive Muslim immigration into Europe without assimilation. It is ironic that European governments are now frequently criticized for not assimilating their Muslim populations, when the Arab League for years insisted that they must not move to assimilate their new Muslim immigrants – as have Muslim leaders in Europe. So if Muslims can legitimately form cultural enclaves in European cities, which in some cases have become virtually autonomous, such that even police, fire, and emergency personnel don’t dare enter them, why shouldn’t they be governed also by their own laws?

Nor is this the first time something like this has happened. A “religious diversity handbook” given to police officers in Australia’s Victoria state in 2005 stated that “in incidents such as domestic violence, police need to have an understanding of the traditions, ways of life and habits of Muslims.” They were directed to consult with the local imam, who would make sure there was no “fragmenting” of the “family unit.”

In both of these incidents, Muslim leaders protested. In Australia, Joumanah El Matrah of the Islamic Women’s Welfare Council said of the “religious diversity handbook”: “The implication is one needs to be more tolerant of violence against Muslim women, but they should be entitled to the same protection. Police should not be advising other officers to follow those sorts of protocols. It can only lead to harm.” And in Germany, Ayyub Axel Köhler of the Central Council of Muslims in Germany articulated a view often stated by Muslims in Western countries: “Our prophet never struck a woman, and he is our example.” Unfortunately, however, the idea that a husband is sometimes justified in beating his wife – even if in a “light” or “symbolic” way – is held by influential Muslim authorities such as Sheikh Yousef Qaradhawi, Dr. Muzammil H. Siddiqi, former president of the Islamic Society of North America (ISNA), Dr. Muhammad Al-Hajj of the University of Jordan, Islamic apologist Jamal Badawi, and others -- so it cannot be said that Judge Datz-Winter was wide of the mark in Islamic terms when she invoked Qur’an 4:34 to justify the abusive Moroccan husband’s behavior.

Judge Datz-Winter’s decision caused a furor in Germany, and she was quickly removed from the case. That may be one small sign that Europe is inching toward throwing off its multiculturalist blinders and recovering the spirit of General Sir Charles James Napier, the British Commander-in-Chief in India from 1849 to 1851. It is said that a Hindu delegation protested against the British prohibition of sati, the practice of burning a widow to death on her husband’s funeral pyre, by telling Napier that it was part of their cultural custom. Napier famously responded:

You say that it is your custom to burn widows. Very well. We also have a custom: when men burn a woman alive, we tie a rope around their necks and we hang them. Build your funeral pyre; beside it, my carpenters will build a gallows. You may follow your custom. And then we will follow ours.

It is long past time for authorities in Europe and the United States to begin to emulate Napier in their dealings with increasingly restive and demanding Islamic communities. Instead of issuing “religious diversity handbooks” and making special accommodations for Islamic practices, Western officials need to reassert the validity of our own laws and mores, and – at least as long as Europe’s suicidal immigration policies remain in place and neither Europe nor America treats immigration as a national security issue – remind newcomers that they are not welcome to bring with them customs and practices that are at variance with our own. This is the standard to which visitors and immigrants to Islamic countries are expected to adhere. The West should demand no less.

Robert Spencer is a scholar of Islamic history, theology, and law and the director of Jihad Watch. He is the author of six books, seven monographs, and hundreds of articles about jihad and Islamic terrorism, including Islam Unveiled: Disturbing Questions About the World’s Fastest Growing Faith and the New York Times Bestsellers The Politically Incorrect Guide to Islam (and the Crusades) and The Truth About Muhammad.
Posted by jtf at 6:50 AM